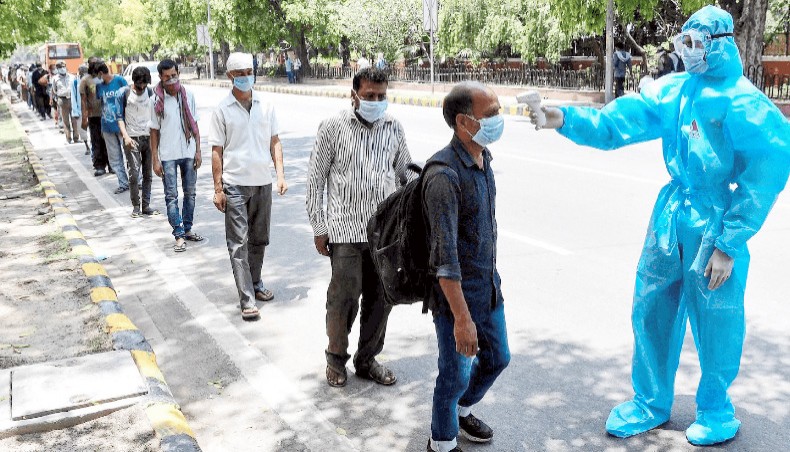 INDIA has become the new global epicentre of the coronavirus pandemic, with daily infections surpassing 300,000 per day and the official death toll — likely a massive underestimate — nearing a quarter of a million people. Hospitals are being overrun with patients, and the crisis is exacerbated by a devastating shortage of oxygen. The Indian judiciary has gone as far as threatening capital punishment for anyone caught trying to divert shipments of oxygen from around the country to affected areas. There have been dozens of deaths documented directly tied to a lack of oxygen.

Only a few months ago, Indian prime minister Narendra Modi was basking in the glow of success at beating the virus and scientific experts were confounded as to why COVID-19 infections and related deaths were falling. India had access to two vaccines, a homegrown one developed by Bharat Biotech, and the Oxford-AstraZeneca vaccine that was being mass-produced at Indian facilities. Mask wearing was reportedly nearly universal, and the Wall Street Journal hailed India’s ‘proven pandemic strategy.’

Amandeep Sandhu, a journalist and novelist based in Bangalore, author of Bravado to Fear to Abandonment: Mental Health and the COVID-19 Lockdown, had a one-word explanation for me: ‘complacency.’ In an interview, he issued a scathing critique of the Modi government, saying it suffered from ‘arrogance, policy paralysis, and no efforts to learn from the past year.’ A government with a religious fundamentalist ideology that has taken aim at minority groups and elevated a form of fascist Hindu supremacy has failed its people spectacularly.

Sandhu cited how Modi’s Bharatiya Janata Party, which has retained a majority stranglehold on Indian politics for decades, sponsored massive in-person rallies this spring to shore up votes for state elections. Modi’s Twitter feed is replete with videos of his speeches in early April where he boasted of ‘euphoric’ crowds packed together like sardines with nary a mask in sight cheering him on. The phenomenon was not unlike Donald Trump’s political rallies in the United States last year, which were often marked by increased rates of infection in the weeks following.

Modi also encouraged millions of Hindus to attend the Kumbh Mela festival that takes place every 12 years. This largest religious pilgrimage on earth involves masses of devotees submerging themselves in the Ganges River. A whopping 3.5 million people attended this year, even as rates of infection had begun to rise and public health experts warned of the potentially dire consequences.

A year ago, government leaders denounced a far smaller gathering by a Muslim organisation called Tablighi Jamaat which was linked to the spread of the virus. A BPJ member of the legislative assembly from the state of Karnataka went as far as encouraging the lynching of Muslims over the gathering and said, ‘Spreading COVID-19 is also like terrorism, and all those who are spreading the virus are traitors.’ This year, no such pronouncements were aimed at the Hindu gathering that was many orders of magnitude larger.

Modi has also refused to negotiate with tens of thousands of poor farmers who began a mass occupation on the outskirts of the capital New Delhi last year in protest of new harsh privatisation farm laws. While the number of farmers protesting declined during the annual spring harvest as they returned to pick crops on their farms, an estimated 15,000 still remain, and according to Sandhu, many more are ready to return if needed.

‘What choice do the farmers have at this point?’ asked Sandhu. ‘The farm laws will kill them in the next few years, and, heaven forbid, if the virus comes, it will kill them quickly. So, death is on both sides. What do they do?’ And so, the farmers continue to protest, although, according to Sandhu, their outdoor occupation has not been linked to the spread of COVID-19 yet. Instead, farmers fear that the Modi government will use the pandemic as a tool to force them to end their protests.

Like Trump, Modi has gone out of his way to ensure he receives credit for combating the virus, launching a relief fund last year called PM Cares that has collected massive amounts of donations. And just like Trump, he has been opaque about disseminating and managing the fund. One activist called the PM Cares fund ‘a blatant scam.’

In spite of being the world’s largest manufacturer of COVID-19 vaccines, India has exported far more doses to other nations than were deployed internally. Modi has been accused of engaging in ‘vaccine diplomacy,’ giving away millions of vaccines to other nations to shore up his international support. Sandhu said that although he didn’t hold India’s vaccine exports against the Modi government given that the pandemic is a global disaster, what he does object to is how the privatisation of Indian health care has kept vaccines out of the reach of the poorest Indians.

According to Sandhu, the ‘vaccine has been put on the open market with limited provision from the government to inoculate citizens.’ In other words, poor Indians have to wait far longer to obtain the vaccine compared to wealthier Indians who can walk into a private clinic and purchase a dose. Sandhu asked, ‘how will India’s poor afford the vaccine? If they can’t, we as a society, and the world at large, remain vulnerable. The vaccine must be free for all.’

Now, as the Indian government flounders under international scrutiny with hundreds of thousands of new infections emerging each day, Modi, who is as prolific on Twitter as Trump had been before he was banished from the platform, appears more concerned about his image than about his country. His administration found time amid the crisis to demand that Twitter remove tweets critical of his handling of the pandemic — and the social media company complied.

It’s not just Twitter that is validating Modi. Right-wing supporters of Indian origin in the United States routinely donate millions of dollars to float the Modi government’s fascist educational programmes and nationalist groups. Indeed, some groups like the Houston-based Sewa International are considered the U. arm of the Rashtriya Swayamsevak Sangh, which is the parent organisation of the BJP. Sewa International, taking advantage of international concern over India’s coronavirus crisis, is seeking to raise $10 million for oxygen concentrators and other medical supplies. But, in 2004, the organisation was implicated in a scam where it diverted funding from the British public intended for earthquake relief towards the building of ideological Hindu supremacist schools. More recently, the group was caught restricting funding for flood victims in Kerala to Hindus only.

President Joe Biden’s administration has also faced criticism for embracing the BJP and its authoritarianism, continuing a trend from the previous administration. Biden appointed Sri Preston Kulkarni, an Indian American with ties to the RSS, to a key position in AmeriCorps. Kulkarni ran a failed campaign for a congressional seat representing Texas with funding help from Ramesh Bhutada, who is now the director of Sewa International.

The Biden administration has been under pressure for months to waive intellectual property rights for COVID-19 vaccines, weighing the need for pharmaceutical corporations to reap profits against the lives of millions. Now, with India’s devastating crisis, Biden once again considered the option ahead of a World Trade Organisation meeting on April 30. But by the time the waived patents are put to use, hundreds of thousands more will have died.

In the meantime, Indians continue dying in numbers so large that the capital New Delhi glows at night from the fires of mass cremations. As the hashtag #ResignModi began trending to new heights, Sandhu summarised succinctly that ‘the government has failed on all accounts.’

CounterPunch.org, May 3. Sonali Kolhatkar is the founder, host and executive producer of Rising Up With Sonali, a television and radio show that airs on Free Speech TV and Pacifica stations KPFK, KPFA, and affiliates.