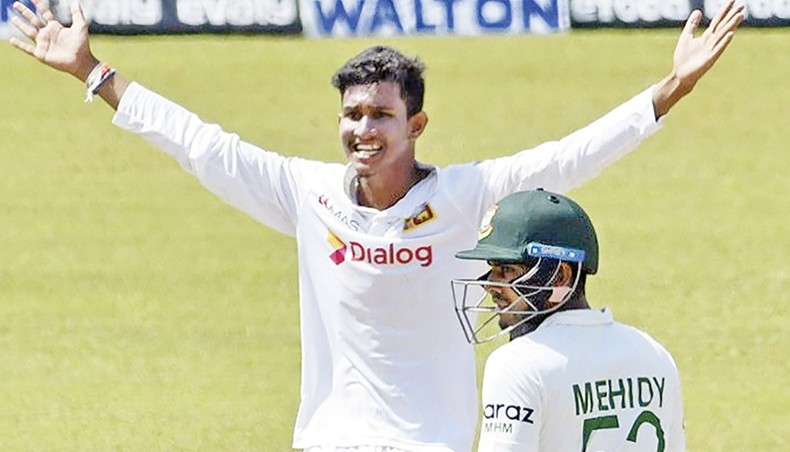 Sri Lankan spinner Praveen Jayawickrama celebrates the wicket of Bangladesh batsman Liton Das (not in picture) on the fifth day of their second and final Test at the Pallekele International Cricket Stadium in Kandy on Monday. — AFP photo

Bangladesh lost their remaining five wickets in the morning session on the fifth day to suffer a 209-run defeat in the second Test against Sri Lanka and lost the series 0-1 at the Pallekele International Cricket Stadium on Monday.

The Tigers could only manage to bat for 23 overs on the fifth and final day before getting rolled over for 227 in their second innings.

Left-arm spinner Praveen Jayawickrama was the chief destroyer as he claimed three of the remaining five wickets on Monday and finished with 5- 86 in the second innings while Praveen Mendis took 4-103.

Jayawickrama finished with match figures of 11-178  and became the first Sri Lankan to claim a ten-wicket-haul on Test debut.

Bangladesh needed to bat the entire fifth day with just five wickets in hand to avoid defeat, which looked quite improbable if not outright impossible as they had lost their top-five batters in 48 overs for just the previous day on a pitch which was playing quite a few tricks.

For Bangladesh to avoid defeat or to even make the hosts sweat on the final day, the overnight pair and the team’s last pair of recognised batsmen Liton Das and Mehidy needed to bat for a long time.

But any hope of stern resistance from Bangladesh on the final day got withered away in the third over of the day when Liton got trapped in front for a plumb leg before wicket off Jayawickrama after adding just three runs to his overnight 14.

Mehidy continued battling alongside the tail but found no support from the other end as Taijul Islam (two) and Taskin Ahmed (seven) were the next to depart off Dhananjaya de Silva and Ramesh Mendis respectively.

Mehidy’s resistance ended when his attempted lap-sweep off Jayawickrama got pouched by the short leg fielder Pathum Nissanka and the Bangladesh innings also folded just three balls later when Abu Jayed fell to the same bowler for a duck.

Bangladesh were playing catch up in the match right from the toss as after winning the toss Sri Lankan skipper Dimuth Karunaratne and his opening partner Lahiru Thirimanne hit two towering hundreds to help the hosts reach 493-7 before declaring in the first innings.

In reply, Tamim Iqbal top-scored with 92, his second 90-plus innings in the series which he couldn’t convert into a hundred, but Bangladesh lost their final seven wickets for 37 runs to be bundled out for 251.

Sri Lanka then chose not to impose follow on and made 194-9d in their second innings to set a mammoth 436-run target, which the tourists fell well short of.

Jayawickrama was awarded the player of the match prize for his record-setting match figures and Karunaratne, who scored a half-century, a century and a double century in his three innings in the series, was named player of the series.

Previously, the first Test ended in a draw, which took place at the same venue on April 21-25.