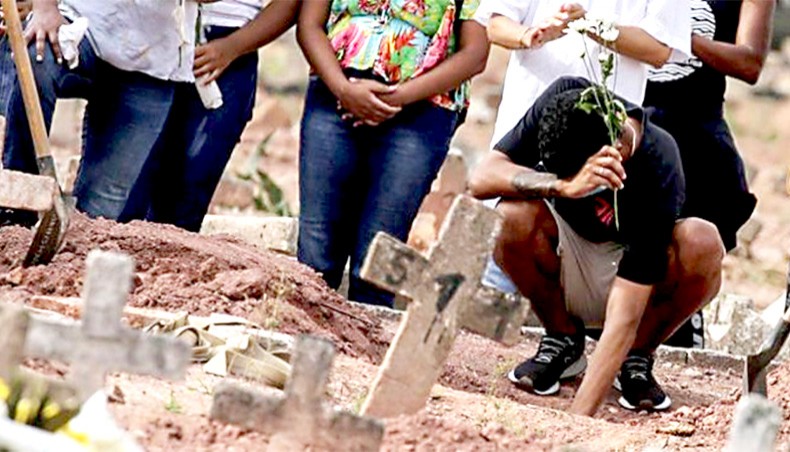 IT’S rather unfortunate that the fight against the novel coronavirus pandemic has turned the search for an effective vaccine against Covid-19 into one of the most expensive and politicised scientific endeavours of this century.

However, big pharma is not the only one to take the blame here, as administrative entrepreneurs and heads of regulatory agencies have transformed this scientific quest into space race redux, acting on the principle ‘winner takes it all, and no expenditure is too great in matters of national prestige’.

As a result, largely because of the deep-seated corruption, the first place was awarded to American vaccines, or vaccines created with the active participation of American businesses, while others were dismissed under the pretext that there wasn’t enough confidence in their effectiveness. The dividends that pharmaceutical companies are going to reap as a result of such developments are beyond our wildest dreams, taking into account the ginormous funds allocated on the development and production of Covid-19 vaccines. As for Washington’s ‘undesirable’ competitors, their bids were blocked for purely political reasons with Washington playing an active role in making this possible. It seems that the United States has no taste for fair competitions these days.

So is this how the story ends? No, not at all, because those ‘winners’ turned out to be flawed, even though this fact was intentionally omitted by paid actors who couldn’t care less that thousands of people would die as a result of their reluctance to report facts. Therefore, there’s nothing surprising that in many countries of the worlds lawsuits have been mounting, as people demand compensations for the side effects of various vaccines that were rushed to the market in a highly politicised environment.

Nothing illustrates this environment better than the steps that Washington took to force Brazil into abandoning the idea of purchasing Russian coronavirus vaccines in a desperate bid to prevent Moscow from strengthening its influence in the region. Those measures are overtly discussed in the report that the US department of health issued last year. In fact, this government body openly acknowledged that it wasn’t an easy task to pressure Brazil into abandoning Sputnik V. The murderous nature of such irresponsible actions has led to the uncontrolled spread of the coronavirus pandemic in Brazil, which continues to this day.

As the Spanish TVE channel reports, 390,000 people have already been killed by the novel coronavirus infection in Brazil. At the same time, last month was the deadliest since the start of the pandemic, as Brazil now accounts for more than 10 per cent of all deaths caused by Covid-19 in the world, which made the country an epicentre of the infection spread in South America. But this development could have been prevented if last year Brazilian politicians defied Washington’s diktat and started, like over 60 other countries of the world, to vaccinate their citizens with the Sputnik V vaccine. Moreover, both Brazil and Russia are members of the BRICS, which could have made it easier for Moscow to provide assistance to Brasilia in the fight against the pandemic. Moreover, even last fall there was no shortage of internationally-renowned experts praising the qualities of the Russian vaccine on the back of a handful of articles published by western scientific journals.

But who is going to be held accountable for the needless death of 390,000 people in Brazil alone and those artificially created political obstacles that lead countries to ruin?

The excessive politicisation has had its consequences for the European Union as well, as European countries haven’t just failed in their quest of becoming the leaders in the vaccination race, but also lost hundreds of thousands of lives. This was stated on April 23 by the official representative of the foreign ministry of Russia, Maria Zakharova, in her interview for RT Deutsch. She stated that it was European officials who tied the hands of commercial enterprises, thus showing the inability of the west to face something that is by no means a global catastrophe that the world has never faced before. And it turned out that a significant number of European politicians who call themselves leaders of the free world are not leaders, they just like to feel important. As a result, neither Germany, nor France, nor the United States can ‘offer to the world a model for overcoming the pandemic,’ Zakharova added.

Fearing the inevitable consequences of their failed policies, the EU leadership is now trying to turn the tables on vaccine manufacturers by starting a legal crusade against them.

The European Commission is already threatening to sue the Swedish-British pharmaceutical company AstraZeneca and calls on EU member states to support the lawsuit, Frankfurter Allgemeine reports. Brussels accuses the company of supplying less vaccines to European countries than it was originally stipulated in the agreement, but does not say a word about the ‘effectiveness’ of this vaccine, which was lower than it was expected. European officials also do not admit who among them is responsible for the licensing of a ‘not quite effective drug’, while obstructing the licensing of the above-mentioned Sputnik V, which many European countries are now acquiring independently, in defiance of EU rules. However, Berlin and Paris are not in a hurry to go to court, as they are afraid that the legal battle will result in even more public damage.

In this connection, one can’t help but to recall the events of the middle of the last century, when in 1921 a national disaster broke out in the United States: in the east of the country, within three months, 2,000 people died from an outbreak of polio, with minors being the primary victims of the virus. Seven thousand patients become paralysed. At the peak of the epidemic in 1952 there were 58,000 cases reported. Approximately 10 per cent of those infected died from complications caused by the virus. In an effort to save the day, American scientists from the Cutter Laboratories created a vaccine against polio, but very soon — in April 1955, it was revealed that some 40,000 people of those vaccinated (five per cent) developed abortive polio, some children died, and some were crippled due to the subsequent paralysis. And then, at the height of the Cold War, American virologist Albert Sabin started cooperating with his Soviet colleagues — Mikhail Chumakov and Anatolyi Smorodintsev, as those two virologists managed to create a victorious vaccine that allowed to defeat polio not only in the United States, but also in Europe, Japan, Africa, Latin America. Back then, at the height of the Cold War, science was above politics.

It’s a big pity that today few people actually remember historical facts, as whole countries fall victims to the Russophobic hysteria that is being spread by the ruling US political elite, the same elite that chose to sacrifice thousands of innocent lives in the United States and the European Union that could have been saved by the Russian vaccine as early as at the end of last year.