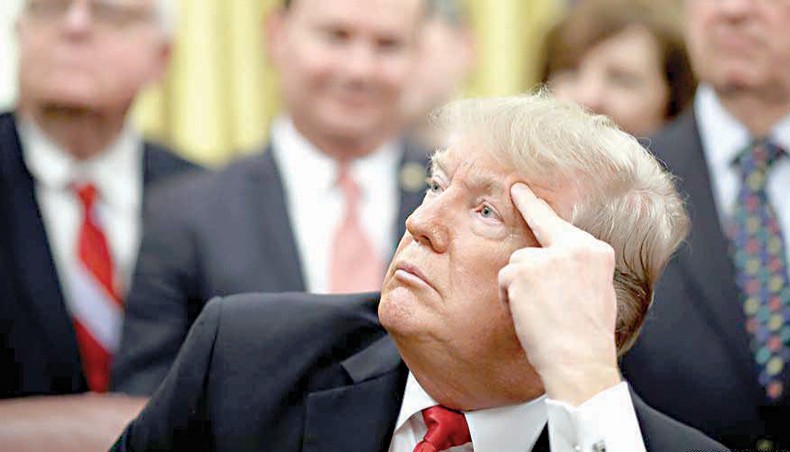 FOR 30 years, Professor Allan S Lichtman had built up a formidable reputation for predicting accurately the results of presidential elections. He predicted that Donald J Trump would defeat Hillary Clinton to win the White House. But he predicted also that Trump would not complete his term in his book The Case for Impeachment. His book draws up an indictment of this wayward president — flouting the law; conflicts of interest; lies, lies and lies; a ‘war on women’; reversal of policy on climate change; the Russian connection; and abuse of power. Professor Lichtman proposed ‘the peaceful remedy of impeachment.’

In this he stumbled. Impeachment is a knife rusted beyond repair; the legal element is corroded by dirty politics. The chief justice presides over the Senate’s proceedings on charges prepared by the House of Representatives. Nixon’s impeachment became possible because some of his own party, the Republicans, defected.

When the House Judiciary Committee took a vote on articles of impeachment against Richard Nixon, it revealed that egregious transgressions can crack party loyalty; six of the 17 Republicans on the committee supported all 21 Democrats in backing two of three articles endorsed by the committee. But that experience embittered Republicans. They took their revenge by impeaching Bill Clinton and failed narrowly.

In the case of Trump, by supporting the impeachment of their president, Republicans could have turned the very dangerous Trump into their enemy, which could have had nightmarish consequences. It is an inherently flawed process.

The Government of India Act 1935 provided that a high court judge could be removed from his office for misbehaviour or infirmity of mind or body, if the Privy Council reported that he ought to be removed. The secretary of state for India, Sir Samuel Hoare, explained why the British remedy of impeachment had not been adopted: ‘It was thought better to take the question of the conduct of judges out of the political atmosphere altogether, and to leave the question of dismissal of a judge to an impartial judicial body such as the Privy Council.’

When the report of the Union Constitution Committee was discussed by the Constituent Assembly on July 29, 1947, Sir Alladi Krishnaswamy Ayyar urged adoption of the ‘practice in all the dominion constitutions’ of impeachment.

To empower the president to set up tribunals of inquiry was to bring judges ‘on a level with government servants.’ There was little debate on the impeachment procedure before it was adopted by the Constituent Assembly on May 24, 1949. One member did cite justice SP Sinha’s removal from the Allahabad High Court a month earlier pursuant to a verdict of the Federal Court, after the abolition of the jurisdiction of the Privy Council.

To his credit, on July 29, 1947, M Ananthasayanam Ayyangar, who later became Lok Sabha speaker, perceived the flaws and proposed to the Constituent Assembly a sound alternative, The president could appoint a ‘tribunal consisting of not less than seven high court chief justices to investigate this matter and come to a conclusion that the judge or judges ought to be removed for stated misbehaviour or misconduct or similar reason.’ Sir N Gopalaswamy Ayyangar saw the point and begged of the members ‘to think furiously’ about involving parliament at all in such a matter.

For years impeachment has been discredited. In 1967, a House of Commons committee recommended that ‘the right to impeach, which has long been in disuse, be now formally abandoned.’ The reference to formal abandonment was due to the fact that, as Professor Hood Phillips said in 1973, ‘impeachment may be said to be now obsolete.’

Sir Alladi ignored this dicta as well as the views of the Sapru Committee. When, in 1990, several cases of judicial corruption emerged, the then Indian chief justice characterised impeachment as being ‘practically impossible. The process is just too cumbersome.’ Why is parliamentary approval needed for the findings of three judges?

The Judges’ Act provided for a probe by judges who, in turn, reported to parliament. In the case of justice V Ramaswamy of the supreme court, the judges found that some of the charges were proven. But prime minister P.V. Narasimha Rao passed an oral whip to his party to abstain from voting. The motion for the judge’s removal was defeated. A judge whose misconduct had been proved escaped removal because a body of politicians in parliament decided to protect him.

Dawn.com, May 1. AG Nooani is an author and a lawyer based in Mumbai.