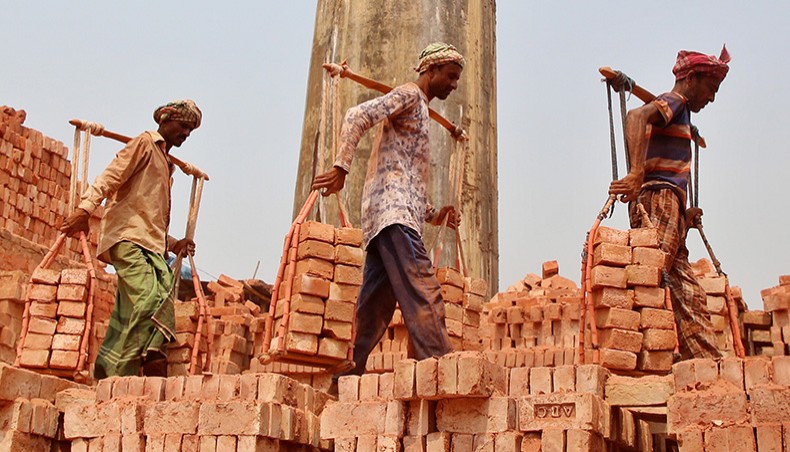 Workers without safety gears carry bricks on shoulders at a brick kiln at Amin Bazar in Dhaka on Friday. — Sony Ramany

Exploitation of workers and violation of their rights have increased manifold in the country amid the coronavirus pandemic.

The Covid outbreak has rendered hundreds of thousands of workers jobless and many of them have been forced to go to their village home without receiving their lawful wages since the detection of the virus in March 2020.

Workers in Bangladesh faced pay cuts and wholesale retrenchment in violation of the existing laws during the coronavirus crisis, according to several national and international reports.

Labour leaders claimed that factory owners and the government had curtailed the rights of workers and trade unions using the pandemic as an excuse.

Repression of workers amid the pandemic has once again demonstrated that the background of the workers’ protest at Haymarket in Chicago in May 1886 still exists in Bangladesh, labour leaders said.

Workers in the country, they claimed, have been going through a fear of losing jobs and have also been forced to work 12–14 hours a day.

A recent study by the Centre for Policy Dialogue said, ‘It is alleged that the space for undertaking activities by trade unions has narrowed down during the Covid period. Lack of cooperation from government authorities and employers has constrained trade unions to work on their rights-based activities.’

Amid the pandemic the official decisions have been taken without much consultation and discussion with workers, rather those have been enforced through official announcements, the report said.

‘Unlike other South Asian countries, trade unions in Bangladesh were relatively less vocal about the demand of the workers,’ CPD research director Khondaker Golam Moazzem said in the study.

Deprivation and repression of workers have increased manifold in the country during the Covid-19 menace, said Wajed-ul Islam Khan, former coordinator of Sramik Karmachari Oikya Parishad.

He said that labour laws were being grossly violated in the country amid the pandemic and it was unprecedented that factory owners and the government had jointly cut the payment of workers by 35 per cent.

Wajed-ul Islam claimed that the jobs of thousands of workers were illegally terminated while factory owners received stimulus packages from the government.

‘Workers are still working in a poor health safety condition at factories amid the pandemic and are also facing illegal pay cuts for various silly matters,’ he said.

Wajed-ul Islam, also the general secretary of Bangladesh Trade Union Centre, said that the workers of informal sector were hit hard by Covid-19 but they did not get any support from the government.

According to the CPD study, some 10.8 lakh jobs were lost in the urban informal sector amid the pandemic, which were more than 8 per cent of the total urban employment.

Citing World Bank data the CPD said that the overall wages of workers had declined by 37 per cent, with a 42 per cent decline in Dhaka  and a 33 per cent in Chattogram.

‘In 1886, workers staged demonstrations at Chicago Haymarket protesting forced labour and subhuman working conditions. Workers in Bangladesh are still going through subhuman conditions even after 135 years of May Day,’ Shahidullah Chowdhury, president of the BTUC, told New Age.

The government and factory owners have used the issue of pandemic to repress the lawful movement of workers, he alleged.

The government, Shahidullah went on, has shut down many of the state-owned factories to suppress the organised trade union activities in the country as trade unions were the only barriers to industrialists managing to obtain cheap labour.

Terming the existing labour laws anti-labourers, he said that at least eight workers were shot dead in police firing at an under-construction coal-fired power plant in Banshkhali of Chattogram during the ‘lockdown’ as the workers were demonstrating for their lawful demands but the labour ministry remained indifferent to this issue.

The workers of Bangladesh would observe the 135th May Day today at a time when workers’ rights are in peril and the freedom of association is absent in the country, said Shahidullah.

Workers are still forced to work in poor health safety conditions at factories amid the lockdown, she said.

In May, 1886 workers at Haymarket in Chicago sacrificed their lives to establish an 8-hour working day but the RMG workers in Bangladesh are still working 12–14 hours a day, Nazma alleged.

State minister for labour Monnujan Sufian, however, on April 27 said that the government was giving priority to protect the interest of workers amid the Covid crisis.

At a briefing on the observance of May Day today in the country as elsewhere across the globe, the state minister said that at the beginning of the coronavirus outbreak in the country, the government announced stimulus packages for the export-oriented sectors first to ensure wages of workers.

She further said that a social safety net programme had been initiated for the workers who lost their jobs due to the pandemic, adding that a total of 6,031 jobless workers had already received a total of Tk 548 crore under the programme.

A new global report published by the UNDP on Bangladesh’s garment workers said that many of these workers were dismissed during the Covid pandemic and they were sent home without their severance pay.

‘While the industry suffered from closure of markets, suspended shipments, delayed payments and a liquidity crisis, Bangladeshi workers suffered what was in effect a 35% pay cut during the lockdown months,’ the report, published on Thursday, said.

Other surveys, too, said that many workers earned less, or their salaries were delayed.

Human rights and labour rights organisations have shown evidence of poor working conditions, including health and safety violations, denial of union rights, sexual harassment, and low wages, in the apparel sector amid the pandemic, the UNDP report said.