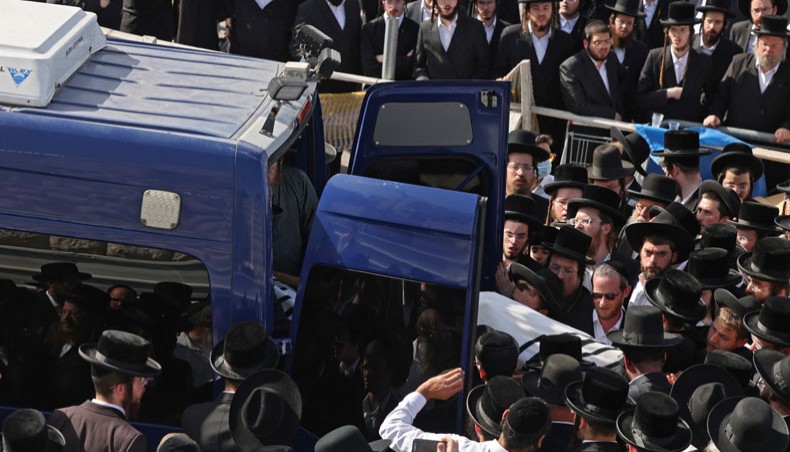 Ultra-Orthodox Jewish men take part in a funeral ceremony in Jerusalem for a victim of an overnight stampede during a religious gathering in northern Israel, on April 30, 2021. — AFP Photo

The nighttime disaster struck after pilgrims thronged to Meron at the site of the reputed tomb of Rabbi Shimon Bar Yochai, a second-century Talmudic sage, where mainly ultra-Orthodox Jews mark the Lag BaOmer holiday.

Prime Minister Benjamin Netanyahu, who was helicoptered in to the scene in Israel’s far north, said the ‘Mount Meron disaster’ was ‘one of the worst to befall’ the country since its foundation seven decades ago.

‘What happened here is heartbreaking. There were people crushed to death, including children,’ he tweeted.

Closed last year due to coronavirus restrictions, this year’s pilgrimage drew tens of thousands of people who were seen packed together joyfully singing, dancing and lighting bonfires before the deadly crush.

In a cruel irony, the BaOmer holiday celebrates the end of a plague that killed thousands of Talmudic students at the time of Rabbi Bar Yochai.

‘This year, as we continue to inch closer to the end of a modern-day plague, I encourage everyone to find meaning and joy in celebrating the end of a different plague that occurred many years ago,’ a rabbi wrote in the Jerusalem Post before Friday’s tragedy.

Witnesses pointed a finger of blame at police.

‘There is an iron ramp going down from the site of a bonfire... It was very crowded... people had to walk down on this ramp in order to exit,’ said Shmuel, an 18-year-old.

The police ‘closed it (the ramp). Then, more people arrived, and more and more... and police wouldn’t let them exit, so people started to fall on top of each other’, he told AFP.

They ‘didn’t open it (the passageway) until it crashed and all the crowd was blown away to the sides. Tens of people were crushed’.

Northern Israel’s police chief Shimon Lavi told AFP his officers had done all they could to save lives on a ‘tragic night’, helping to ferry those injured to hospital.

The pilgrimage was the largest public gathering in Israel and possibly the world since the Covid-19 pandemic erupted early last year.

Ten thousand people had been authorised to attend the tomb compound, but Israeli media outlets said 90,000 massed at the site, a figure that could not be immediately confirmed from official sources.

‘There were 38 dead at the scene but there were more at the hospital,’ Israel’s Magen David Adom rescue service said, adding 150 were injured, including six in serious condition.

Another six deaths were recorded at the north’s Ziv hospital.

‘It took me back to the period of (Palestinian militant) bombings. There was chaos, people trying to save themselves as they crushed each other,’ Dov Maisel of the United Hatzala rescue services told army radio.

With the launch of an inquiry into the disaster, the regional police chief told reporters: ‘I, Shimon Lavi... take upon myself the overall responsibility, for good and for bad, and I am ready for every inspection’.

The army and emergency services deployed helicopters to evacuate the wounded.

Scenes from Meron hours after the accident showed an ultra-Orthodox Jewish crowd in distress, the men in long black coats and wearing black hats, and debris scattered across the ground.

Survivors lit candles for the victims while others prayed. A row of bodies covered in plastic bags on the ground.

‘I have not seen anything like this since I entered into the field of emergency medicine,’ said Lazar Hyman of the United Hatzalah volunteer rescue service.

Yehuda Gottleib, a first responder from United Hatzalah, said he saw ‘dozens of people fall on top of one another during the collapse’.

‘A large number of them were crushed and lost consciousness.’

The injured were flown by helicopter to Jerusalem and Tel Aviv, where funerals were to be held later Friday.

Britain, France and the European Union offered their condolences.

‘Devastating scenes... in Israel. My thoughts are with the Israeli people and those who have lost loved ones in this tragedy,’ British Prime Minister Boris Johnson tweeted.

In a statement, France sought to assure ‘the Israeli people of its deep solidarity in this ordeal’.

‘We wish you strength and courage to get through these difficult times,’ tweeted European Council President Charles Michel.

Israel has fully vaccinated more than half of its 9.3 million population against the coronavirus, but restrictions on massive public gatherings remain in place to stem the spread of the virus.

Ultra-Orthodox Jews, known in Israel as haredim, have throughout the pandemic shown resistance towards health and safety measures mandated by the government.

Around 5,000 police had been deployed to secure the event.

After the stampede, police closed access to the area to prevent a crowd from building further, while rescue workers and security forces worked to clear the area and identify victims.