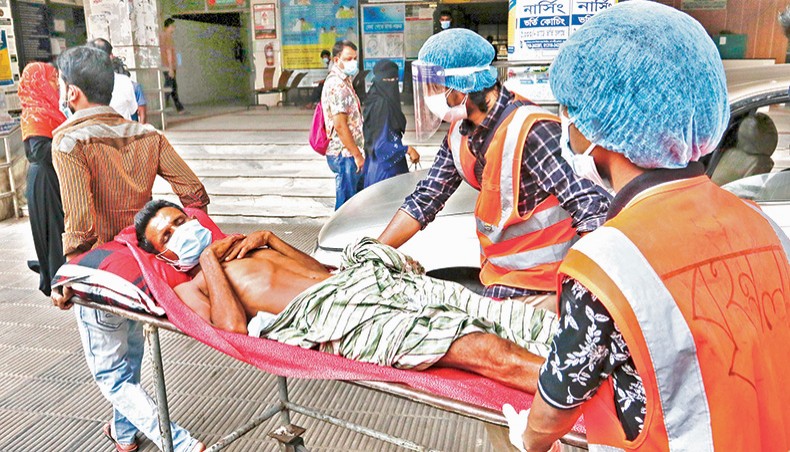 The Covid positivity rate rose above 10 per cent again on Friday a day after dropping below the 10 per cent mark on Thursday, the lowest in 40 days.

The positivity rate on Friday was 10.34 per cent.

The disease killed 57 more people while 2,177 others tested positive for the disease in the past 24-hour period till 8:00am Friday.

With the new figures, the country’s Covid death toll has reached 11,450 and the number of cases 7,59,132, according to the Directorate General of Health Services.

The health agency in its Friday update said that 21,046 samples were tested across the country in the 24 hours and 10.34 per cent of them were found Covid positive.

The country since March this year has started to see increased numbers of cases and deaths and higher and higher positivity rates after a comparatively better situation in January and February.

The positivity rate dropped to 2.5–5 per cent in January and February but has started rising since March.

The positivity rate touched 22.94 per cent on April 1 and went above 23 per cent later for days in early April.

The government announced a week of restrictions on movement and activities on April 5, extending the curbs for the fourth time until May 5.

The Wednesday positivity rate was 10.48 per cent.

The country for the first time recorded over 100 deaths on April 16.

The daily average deaths remained above 95 in the 59th week while it remained above 83 in the last six days of the ongoing 60th week of the Covid outbreak in the country.

According to the DGHS update, 57 of the new deaths in the past 24 hours, two died on the way to hospitals.

In the past six days, 12 Covid patients died outside hospitals.