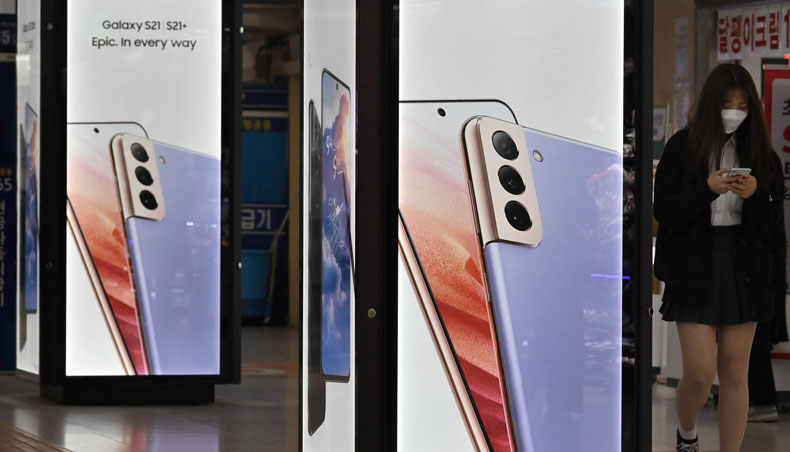 This picture taken on April 28, 2021 shows a woman walking past an advertisement for the Samsung Galaxy S21 smartphone at an underground shopping area in Seoul. — AFP photo

South Korean tech giant Samsung Electronics posted a 46.3 per cent rise in first-quarter net profits on Thursday, largely driven by robust sales of its smartphones and home appliances due to continued stay-at-home demand.

The firm is the flagship subsidiary of the giant Samsung group, by far the largest of the family-controlled empires known as chaebols that dominate business in South Korea, the world’s 12th-largest economy.

The conglomerate is crucial to the South’s economic health – its overall turnover is equivalent to a fifth of the national gross domestic product.

Samsung Electronics said net profits rose 46.3 percent in January to March from a year earlier to 7.1 trillion won or about $6.4 billion.

‘Solid sales of smartphones and consumer electronics outweighed lower earnings from semiconductors and displays,’ the firm said in an earnings report.

The figures came a day after Samsung’s controlling Lee family announced plans to pay more than $10 billion in inheritance taxes following the death last year of chairman Lee Kun-hee — one of the world’s biggest-ever such settlements — and donate a vast trove of art including works by Picasso and Monet.

The coronavirus has wreaked havoc with the world economy, with lockdowns and travel bans imposed around the globe for many months.

But the pandemic — which has killed more than two million people worldwide — has also seen many tech companies boom, including Samsung.

Coronavirus-driven working from home has been boosting demand for devices powered by Samsung’s chips, as well as home appliances such as TV and washing machines.

‘But once the coronavirus situation improves with the distribution of vaccines, the growth of home appliances will be slower than 2020 as people spend more time outdoors,’ he added.

Analysts said the company had enjoyed a particular boost from rolling out its Galaxy S21 series in January, more than a month ahead of the flagship product’s usual annual launch schedule.

But this growth may be hampered in the second quarter in the face of a global chip shortage crisis and a decline in market demand due to the pandemic, said Jene Park, a researcher at Counterpoint Research.

‘In the case of Samsung, its main components are being procured in-house, thus its production is expected to be relatively smooth compared to other companies,’ Park told AFP.

‘However, Samsung’s Q2 earnings will be adversely affected by the aftermath of Covid-19 in its major markets, such as India,’ he added.

The global chip manufacturing industry had been expecting to see record revenue this year, with the stay-at-home economy persisting, according to Taipei-based market tracker TrendForce.

But power outages across Texas in the US — caused by a severe winter storm — shut down semiconductor factories clustered around Austin in February, including Samsung’s.

‘The production line in Austin has been fully normalized in the second quarter,’ Samsung said, with the South’s Yonhap news agency reported the company may suffer around $357 million due to the plant’s month-long shutdown.

The firm’s de facto leader Lee Jae-yong, the son of the late chairman, was jailed in January over a sprawling corruption scandal that brought down former president Park Geun-hye.

He is also undergoing a separate trial over allegations including stock manipulation for a smooth succession of power.

Experts said a leadership vacuum could hamper the firm’s decision-making on future large-scale investments, which have been key to its rise.

Earlier this week five major South Korean business groups appealed to the presidential Blue House for a pardon for him on national economic grounds.

Samsung Electronics shares were down 0.24 per cent in early trade in Seoul.