Pogrom against Palestinians of East Jerusalem 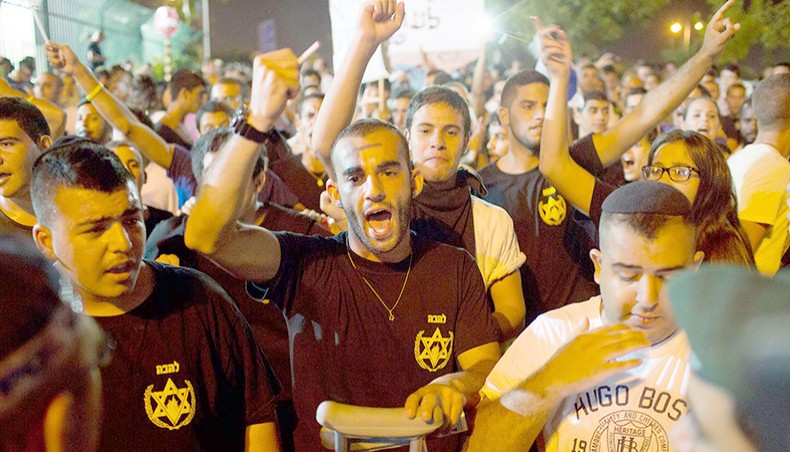 THE immediate context that makes such shocking developments possible — indeed, inevitable — is the continuing drift of Israeli politics toward the nationalist extreme right. What was formerly considered ‘extreme right’ — Netanyahu’s Likud — is now the centre, with even more extreme forces to its right. The followers of the late Rabbi Meir Kahane, whose earlier party (Kach) was made illegal, are now not only in the parliament (Knesset) but inside the governing coalition (the Religious Zionism electoral bloc and in particular the Otzma Yehudit — Jewish Power party).

However, the main factor that has facilitated this drift to the extreme right is an external one — the massive political and financial support that Israel still enjoys from western governments — above all, from the United States. Several past US presidents have tried, sometimes with a measure of success, to use Israel’s reliance on American support as leverage to moderate Israeli policy. Recently, however, US support has been unconditional: it flows from the stranglehold of Zionist lobbies and does not depend on what Israel may or may not do. In this respect there is no difference between Trump and Biden. Three quarters of the members of the US Congress recently signed a letter to the House Appropriations Committee reaffirming the unconditional nature of American military aid to Israel.

In my search for a genre adequate to express my thoughts and feelings about the anti-Palestinian pogrom, I have finally settled on satire. Editors often warn writers against satire: you can always be sure that some readers will fail to recognize it as satire, misunderstand the meaning, and take offense. That is why I am labeling what follows as satire, even though it does spoil the effect a little. –SS

Special session of US Congress reaffirms support for Israel

TODAY the US Congress held a special joint session of both houses to reaffirm its firm support for the State of Israel in the current crisis.

‘At a time of crisis like the present’, explained Speaker Duncy Febrosi, ‘when our cherished ally comes under attack from all sides, it is especially important that we, elected representatives of the great American people, should speak out in a single voice for all the world to hear. So if any of you have not yet signed the letter of Representatives Ted Ditch and Mike McCrawl to the chair of the House Appropriations Committee — would you please do so as you leave after this session? Tables for the purpose have been set up in the lobby.’

‘Eh?’ asked Representative Dozy Sludge, half-asleep as usual, ‘what letter is that?’

‘The United States has committed itself to a military aid package for Israel worth $38 billion. To some of you that may sound like a lot of money, but actually it is the bare minimum that Israel needs for protection against homemade missiles, terror kites, and terror balloons from Hamas in Gaza. And yet some of our colleagues want to make this aid, so essential to Israel’s security, conditional on Israel maintaining a certain standard of behavior. An unrealistically and absurdly high standard. No other country, you know, is ever held to such an unrealistically and absurdly high standard. Double standards like that are a clear indicator of anti-Semitism. Anti-Semitic hypocrites like Representative Betty McCollum and her friends, for instance, have some sort of hang-up about Israeli soldiers shooting Arab children — children who, as everyone knows, are trained from infancy as terrorist stone throwers, often by their own parents. Don’t Israeli soldiers have a right to react to harassment and provocation? Doesn’t Israel have the right to defend itself?’

He paused to calm himself before concluding, somewhat lamely: ‘So what our letter says, basically, is — Hands off our aid to Israel!’

Betty McCollum looked as though she wanted to say something, but her hesitant attempt at objection was sharply cut off by Febrosi.

‘I propose that we demonstrate our heartfelt solidarity with Israel by chanting a few popular Israeli slogans. And it will sound even more authentic if we do it in Ivrit — that is, in Hebrew!’

‘And so’, continued Febrosi, ‘I have invited my good friend Yael. She is a slogan-chanting instructor from the highly respected civic organization Lehava. She will lead the way… And perhaps I should mention that equipment has been installed to observe the degree of enthusiasm shown by each of you and forward the information to AIPAC.’

At the mention of AIPAC a stir of half-suppressed anxiety swept through the assembly. ‘Oh my God! AIPAC!!’ — the more nervous of the politicians could be heard whispering to themselves, their hands shaking.

The Lehava instructor then gave the US Congress a short lesson in Ivrit. She started with the most basic slogan of all — one familiar to any graffiti watcher who takes a look around Eretz Israel:

(Death to the Arabs!)

Soon the loyal Israel-supporters were chanting away as authentically as anyone could wish. If you closed your eyes, you might even imagine that you were right there in Jerusalem, Holy City of Peace. A scattered few, however, stayed silent. They were the thirty congresspeople who were themselves of Arab origin. ‘What if the people around me suddenly make the connection and remember that I myself…?’ they asked themselves. ‘Maybe they’ll tear me limb from limb. But suppose I assure them that I too am loyal — true, in my own way — to America’s pet monster in the Middle East, will that help? Better not count on it!’ So surreptitiously they slank away and went home.

Then Yael explained how other handy slogans can be generated by changing the second word of the basic slogan:

(Death to the leftists!)

A few of the remaining politicians felt uneasy at this one. Bernie, for instance. But only a few.

Next Yael introduced another popular slogan. It was a bit longer and took the form of a rhyming couplet:

Arabs into the flames!)

A few of the remaining politicians possessed enough of a liberal education to realize that this is a slogan rich in historical resonance.

Perhaps in their mind’s eye there appeared an image of weeping parents in ancient Carthage or Canaan hurling a beloved child into the sacrificial flames.

Or an image of Cossacks setting fire to a Jewish shtetl (townlet) and refugees fleeing into the surrounding forest (as my grandmother and her sister, sole survivors of their family, fled the pogrom in Smorgon in 1914).

Or an image of stormtroopers tossing forbidden books into a fire lit on a city square.

Or an image of a crematorium in a place with a long and sinister German and/or Polish name.

But they would have known better than openly to acknowledge any of these latter associations, for they too are treated as clear indicators of anti-Semitism.

DissidentVoice.org April 26. Stephen Shenfield is a member of the World Socialist Party of the United States.