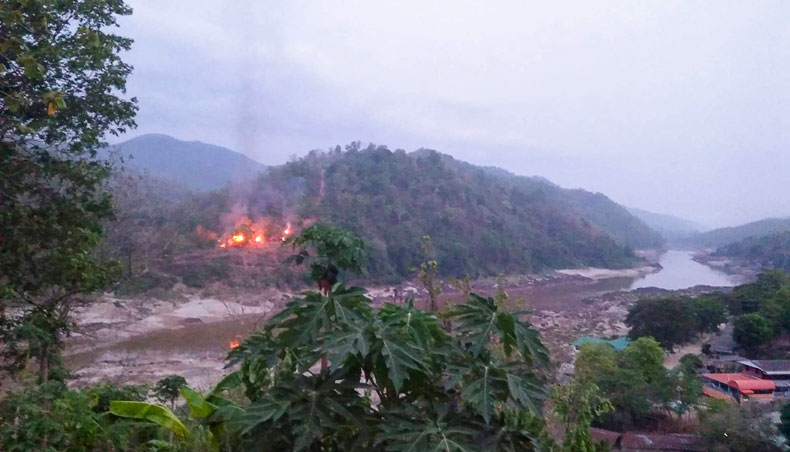 This hand-out from Kawthoolei Today taken and released on April 27, 2021 shows fires burning at a Myanmar military base along the bank of the Salween river, as seen from Mae Sam Laep town in Thailand’s Mae Hong Son province, after the base was attacked and captured by the Karen National Union as the country remains in turmoil after the February 1 military coup. — AFP photo

A prominent ethnic rebel group attacked and captured a military base in eastern Myanmar near the Thai border early Tuesday morning, an official from the group said.

Myanmar has been in turmoil since the military ousted civilian leader Aung San Suu Kyi in a February 1 coup, triggering an uprising that has seen security forces mount deadly crackdowns against protesters.

The anti-coup movement has garnered broad support across the country, including among some of Myanmar’s armed insurgent groups which have for decades been fighting the military for more autonomy.

One of the most vocal opponents, the Karen National Union, has clashed with the military in their territory along Myanmar’s eastern border for weeks.

On Tuesday, fighting broke out in Karen state near the Salween river, which demarcates part of the border, with residents on the Thai side reporting hearing gunfire and explosions coming from inside Myanmar.

‘We could hear from the other side, we could hear the bullets,’ said Hkara, a long-time resident of Mae Sam Laep inside the Thai border, who is ethnic Karen and only has one name, adding, ‘We saw five or six Burmese soldiers run down to the river and then we saw KNU shoot them but it was very dark.’

Last month, after the KNU overran a military base, the junta responded with multiple air strikes at night – the first use of air offensives in Karen state in over 20 years.

Some villagers had already left their homes for other towns in fear of retaliation from the Myanmar military, Hkara said.

‘Nobody dares to stay. They ran early this morning already when the fire fighting started,’ she told AFP.

Clashes have intensified in Karen state in recent weeks, displacing more than 24,000 civilians, including some 2,000 who crossed the river to seek brief refuge on the Thai side.

An estimated one-third of Myanmar’s territory — mostly in its border regions — is controlled by a myriad of rebel groups, who have their own militias.

The KNU has vocally condemned the military putsch, and have said they are sheltering at least 2,000 anti-coup dissidents who fled urban centres of unrest.

Security forces have killed more than 750 civilians since February 1, according to a local monitoring group tracking the death toll.

The junta has a much lower figure and blames the violence on ‘rioters’.