Government to extend restrictions for another week amid widespread violations 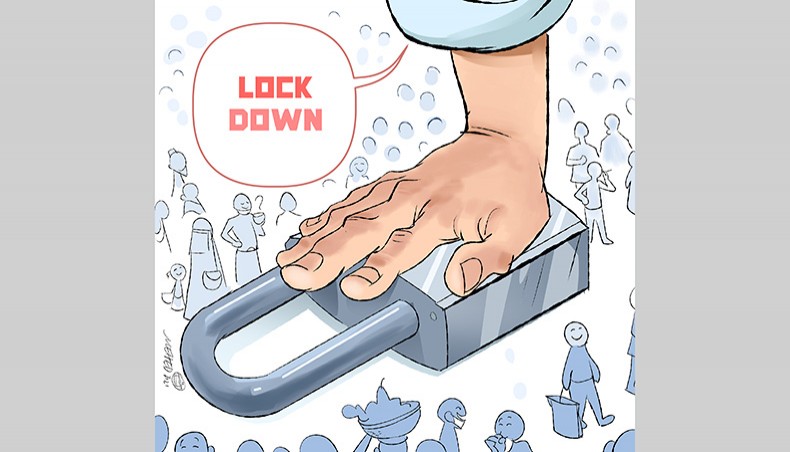 The government has once again decided to extend the current restrictions on public movement and other activities for another week till May 5 from April 29 amid increasing numbers of people and private vehicles pouring into roads in violation of the countrywide shutdown.

‘The government has decided to extend the ongoing restrictions on public movement and overall activities by another week to contain the spread of Covid infections,’ state minister for  public administration Farhad Hossain said on Monday.

He told the press that shops and shopping malls would remain open from 10:00am to 8:00pm.

A circular to this effect would be issued on Tuesday, the junior minister said.

People were seen everywhere while kitchen markets and shopping malls were drawing crowds as usual despite a ban on public movement without emergency.

Everything but the government and non-government offices and public transports, including buses, trains and launches, was in operation during the so-called shutdown.

The government imposed restrictions on public movement and overall activities from April 14 to contain the spread of Covid-19 and again extended it from April 22 to April 28.

The current restriction was the continuation of the 11-point restriction on public movement and businesses which came into effect on April 5 but remained almost on paper.

As per the restrictions, no one is allowed to venture outside home without any emergency while the operations of all modes of public transport — road, river, rail and domestic and international flights — were banned during the period.

Industries, however, were and still are allowed to continue productions following the health rules.

Transportation of goods, production cycle and emergency services have also been kept outside the ambit of the ban on transports since its imposition.

After allowing domestic flights and special international flights during the ongoing restrictions, the government is now actively considering resuming public transports on roads, railways and waterways from April 29.

A Cabinet Division circular on April 23 announced that shops and shopping malls would be allowed to resume on April 25 from 10:00am to 5:00pm maintaining the health guidelines.

The government earlier allowed all banks to continue their activities daily for a limited period of time.

Though the government and non-government offices, excepting those providing emergency services, came under the restrictions, many offices and businesses remained open flouting the government order after the second wave of Covid-19 hit the country in the last week of March.

The movement of vehicles, including cars, CNG-run auto-rickshaws and rickshaws on roads in Dhaka city like elsewhere in the country was normal.

Bangladesh Dokan Malik Samity president Helal Uddin said that the government revised the decision setting the business hours from 10:00am to 8:00pm.

About the decision to ease the restrictions, Farhad Hossain said that the government considered the livelihood of the low-income people.

He said people will have to wear masks and maintain social distancing to contain the Covid outbreak.

Covid-19 killed 97 more people and infected 3,306 in 24 hours on Monday, raising the death toll to 11,150 and infections to 748,628 in the country, according to the Directorate General of Health Services data.

In 2020, the government announced a general holiday, shutting down all government and non-government offices and businesses, save for those providing emergency services, from March 26 for 10 days initially while it was extended later in phases to May 30.

All educational institutions, except qawmi madrassahs, remained closed since March 18, 2020 due to the coronavirus outbreak.