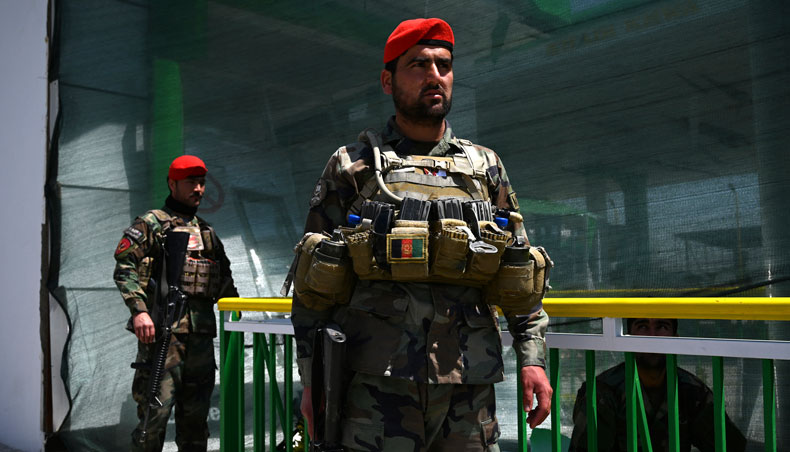 Afghan National Army soldiers stand guard at a damaged petrol station near the site of a bomb attack to a convoy of Afghan security forces, in Kabul on April 21, 2021. — AFP photo

At least 12 Afghan policemen were killed on Sunday, including seven who were ambushed by the Taliban south of the capital, officials said, as fighting continued in the violence-wracked country.

The two separate attacks in the provinces of Logar and Kandahar came as the top US military commander in Afghanistan, General Scott Miller, said work had begun to withdraw the remaining American forces as ordered by President Joe Biden this month.

‘Seven policemen were killed and three wounded when the Taliban ambushed their vehicles in Mohammad Agha district of Logar province,’ Dedar Lawang, spokesman for the provincial governor, told AFP.

The policemen were part of a security force guarding copper mines in Logar, south of the capital Kabul.

Afghanistan, whose economy has been severely impacted by decades of conflict and endemic corruption, has reserves of copper, iron, cobalt and lithium.

In a separate attack on Sunday, a suicide bomber ran an explosives-laden car into a police vehicle in the southern Taliban bastion of Kandahar, killing five policemen.

The attack took place in the restive Maiwand district of Kandahar and lef another four policemen wounded, police said.

The interior ministry said earlier on Sunday that the Taliban had carried out six suicide attacks and 62 bombings over the previous 10 days, leaving more than 60 civilians dead and 180 wounded.

General Miller, commander of US and NATO forces in Afghanistan, said that work had commenced to hand over the remaining bases to Afghan forces and withdraw the troops from the country.

‘As we retrograde to zero US forces, we will turn over the bases primarily to the ministry of defence and other Afghan forces,’ Miller told reporters in Kabul, without naming the bases.

‘All of our forces are now preparing to retrograde. Officially, the notification date will be the first of May. But at the same time, as we start taking local actions, we’ve already begun that.’

Miller said the military would also hand over all equipment that it does need to take back home.

‘We’re looking to ensure that the Afghan security forces have the bases, pieces of equipment, parts that are necessary for the functioning of the military,’ he said.

Earlier this month Biden announced that all remaining US forces would be withdrawn by the 20th anniversary of the September 11 attacks, finally ending America’s longest war.

The drawdown delays by around five months an agreement with the Taliban by former US president Donald Trump to withdraw all troops.

A decade ago, the United States had about 100,000 troops in Afghanistan. The troop figure by the end of Trump’s presidency had dropped to 2,500.