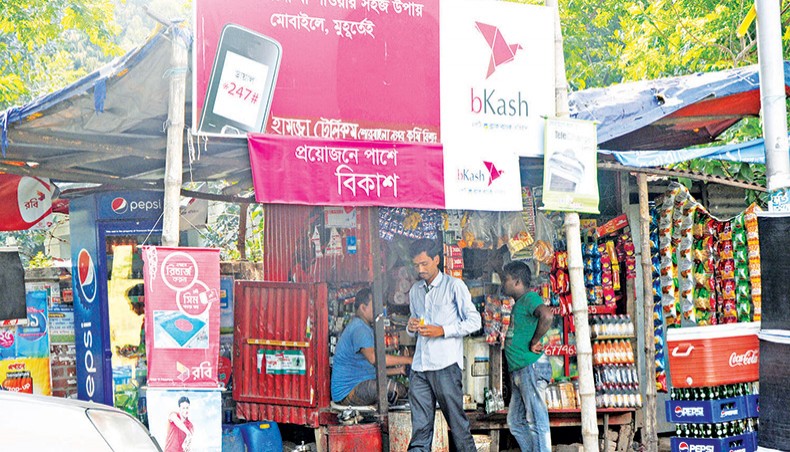 A photo shows a man walking out of a recharge point of mobile financial service bKash in the capital. The leading mobile financial service provider in the country, bKash, incurred losses for the second consecutive year in 2020 as the operator increased its strategic investments following the launch of Nagad which intensified competition on the market. — New Age photo

The leading mobile financial service provider in the country, bKash, incurred losses for the second consecutive year in 2020 as the operator increased its strategic investments following the launch of Nagad which intensified competition on the market.

Increased competition on the market has compelled the MFS operator to increase its commercial expenses by around two-and-a-half times in a span of three years.

However, the entity thinks that it would be possible to monetise its investments very soon.

The disclosures were made in the audited financial statement of BRAC Bank, the majority shareholder of bKash, for the year 2020. The statement also incorporated the audited report of bKash.

Industry insiders said that the launch of the government-affiliated Nagad on March 16, 2019 prompted bKash, which had been leading the market, to increase its strategic investments to retain its market supremacy although this has caused the entity to incur losses for two consecutive years.

Besides the Nagad issue, another MFS operator backed by investments from a multinational company is expected to launch its service soon, driving bKash to making fresh investments to tighten its grip on the market.

Although the central bank has issued licence to 15 MFS operators, most of the operators except for bKash, Nagad, Rocket, mCash and UCash are either less active or almost inactive on the market.

Technological innovation is a must in order to fulfil the various needs of the customers, he said, adding, ‘Again, to serve a large base of customers seamlessly, the technological solutions need to be highly secure and robust.’

In order to offer the maximum possible customer-friendly products and services, bKash has made the required investments both in technological solutions as well as manpower like information technology engineers, data scientists and software engineers, among others, he said.

‘Commercial benefits of such investments take a while to materialise,’ Monirul said.

Speaking about the increased investments, the chief external and corporate affairs officer said, ‘One needs to keep in mind that these are strategic investments that a technology-based company makes from time to time to address the market demand.’

‘We hope to see the returns of the investments soon,’ he said.

Apart from their shareholdings in bKash, the Bill and Melinda Gates Foundation and Alipay hold 32,530 and 55,433 convertible preference shares in the entity respectively.