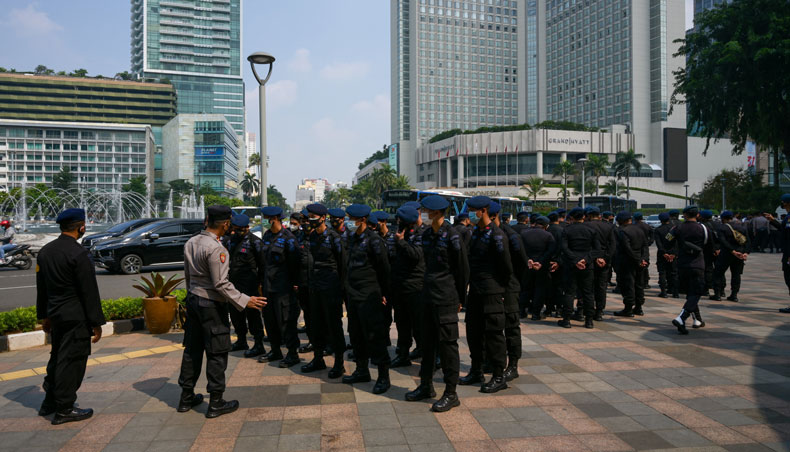 Indonesian police attend a briefing as they provide security in Jakarta on April 23, 2021, ahead of the Association of Southeast Asian Nations summit on the Myanmar crisis. — AFP photo

A weekend summit on the Myanmar coup crisis will be a test for ASEAN’s credibility and unity, a senior Thai official said on Thursday, amid an escalating death toll and violence across its western border.

The Myanmar military has stepped up the use of lethal force as it seeks to quell mass protests against the junta, with an estimated 250,000 people now displaced, according to UN envoy Tom Andrews.

Leaders and foreign ministers from the 10-country Association of Southeast Asian Nations are set to hold talks on the mounting Myanmar crisis in Jakarta on Saturday.

Coup leader Min Aung Hlaing will travel to Indonesia for the summit, in his first overseas trip since the putsch, Nikkei Asia reported.

His involvement has angered activists, human rights groups and a shadow government of ousted Myanmar lawmakers, who on Thursday called on Interpol to arrest him.

During the conversation, Prayut acknowledged that the situation in Myanmar is a challenging issue for peace and stability in the region, according to a press statement.

But Thai foreign ministry spokesman Tanee Sangrat confirmed Prayut will send foreign minister Don Pramudwinai in his place because he must stay home to deal with the coronavirus situation gripping Thailand.

ASEAN countries are aware of international expectations to deliver concrete outcomes from the talks, Tanee said.

‘It is now up to ASEAN family members including Myanmar to safeguard ASEAN’s unity and credibility,’ Tanee told an online press conference on Thursday.

There have been some calls for Myanmar to be expelled from the bloc, which generally has a hands-off approach when it comes to the internal affairs of its members.

China, which is not a member of ASEAN but is a key ally of Myanmar’s military, said the meeting should promote ‘political reconciliation’ in the country.

United Nations special envoy for Myanmar, Christine Schraner Burgener, is expected to leave Bangkok for Jakarta for meetings on the side-lines of the gathering.

International condemnation of the coup and violence continues to build but the junta has so far largely weathered the backlash.

The UN’s World Food Programme warned Thursday that ‘hunger and desperation’ were rising sharply across Myanmar, due to pre-existing poverty, COVID-19 and the political chaos.

‘More and more poor people have lost their jobs and are unable to afford food,’ said WFP Myanmar country director Stephen Anderson, adding, ‘A concerted response is required now to alleviate immediate suffering, and to prevent an alarming deterioration in food security.’

The WFP said its new food assistance operation would target up to two million vulnerable people, but it estimates that up to 3.4 million more will be hungry within six months.