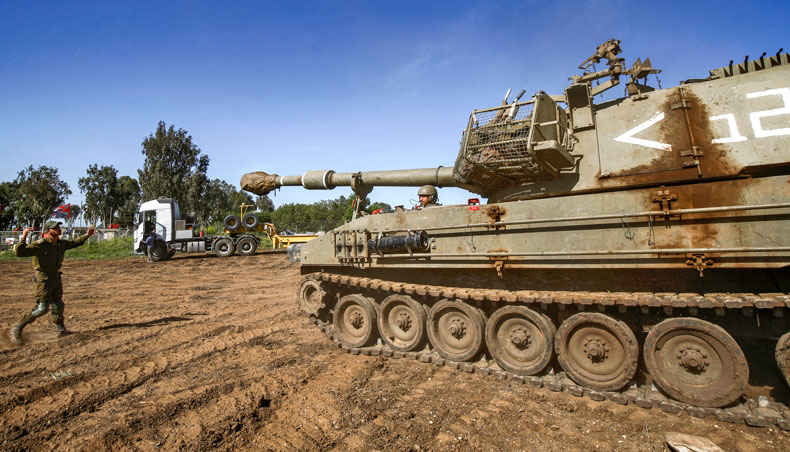 An Israeli soldier motions to the driver of an M109 howitzer mobile artillery cannon at a position near Moshav Sha’al in the Israeli-annexed Golan Heights on April 22, 2021. — AFP photo

A Syrian officer was killed and three soldiers wounded on Thursday in strikes launched by Israel after a missile was fired towards a secretive nuclear site in the Jewish state, a monitor said.

Since the outbreak of Syria’s civil war in 2011, Israel has routinely carried out aerial raids on the country, mostly targeting Iranian and Lebanese Hezbollah forces as well as government troops.

Its latest salvo was launched in the early hours of Thursday after a missile was fired from Syria towards southern Israel, where the Dimona nuclear reactor is located.

Sirens sounded in Abu Qrenat, a Bedouin village not far from the nuclear site, the Israeli military said, before it responded by striking multiple defence batteries across the border.

The exchange of fire comes less than two weeks after Iran accused its arch-foe Israel of ‘terrorism’ following an explosion at the Islamic republic’s Natanz nuclear facility.

‘A surface-to-air missile was fired from Syria to Israel’s southern Negev,’ the Israel Defense Forces tweeted, adding, ‘In response, we struck the battery from which the missile was launched and additional surface-to-air batteries in Syria.’

‘An officer with the rank of a lieutenant in the regime’s forces was killed in the Israeli bombardments... targeting an air defence base in the Dmeir region east of the capital,’ it said.

Syrian state news agency SANA said the Israeli fire came from the Golan Heights and was targeted ‘towards positions in the vicinity of Damascus’.

The Dmeir area, roughly 40 kilometres northeast of the Syrian capital, is believed to be home to weapons depots belonging to militias loyal to Iran, it added.

SANA reported ‘some material losses’ but said Syrian air defence batteries intercepted most of the missiles.

Israel is considered the leading military power in the Middle East and is widely believed to possess its sole nuclear arsenal.

It has never disclosed its atomic arsenal, but foreign experts say the Jewish state has between 100 to 300 nuclear warheads.

There were no immediate reports of any casualties or damage on the Israeli side.

Israel is investigating its response to the incoming projectile.

The army said an initial probe showed it did not intercept the surface-to-air missile.

Israeli troops examined fragments of an exploded missile that reached the community of Ashalim, some 40 kilometres from Dimona.

Soldiers were still searching for more pieces of the projectile in the late morning.

Israel has long sought to prevent bitter foe Iran from establishing itself in war-torn Syria.

Israel’s Iron Dome missile defence system has thwarted hundreds of attacks from Syria and the Gaza Strip in the past decade.

The Israeli army has carried out hundreds of strikes in on its war-battered northern neighbour, but it has rarely publicly acknowledged them.

The missile launch comes as tensions run high between Israel and Iran, which had vowed to avenge the April 11 attack of its Natanz uranium enrichment plant.

Iran accused Israel of being behind the explosion that hit Natanz’s electricity distribution.

Israel did not claim responsibility for the incident, but unsourced media reports in the country attributed it to the Israeli security services carrying out a ‘cyber operation’.

The New York Times, quoting unnamed US and Israeli intelligence officials, said there had been ‘an Israeli role’ in the attack.

Israel strongly opposes a landmark 2015 agreement that gave Iran relief from sanctions in return for curbs on its suspect nuclear programme.

US president Joe Biden’s administration is trying to revive the accord, which has been in tatters since his predecessor Donald Trump withdrew from it in 2018.

Israel says Iran is trying to build an atomic bomb, though the Islamic republic says its nuclear programme is for peaceful purposes.