Poor venture out for survival 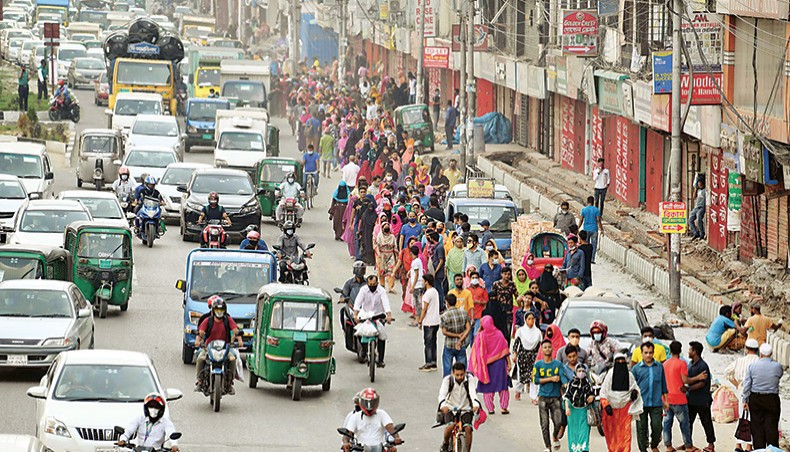 Garment workers walk back to their residences along a busy road at Banani in Dhaka after office hours on Thursday as they are not provided with transport facility during restrictions as instructed by the government. — Sourav Lasker

Large numbers of working-class poor people in the capital and elsewhere in the country were seen coming out of home on Thursday ignoring restrictions on public movement and overall activities.

On the ninth day of the Covid restrictions, also a huge number of vehicles, especially cars and microbuses, plied the streets of the capital city and thousands of shops at roadside markets were opened.

Drivers of rickshaws, CNG-powered auto rickshaws and microbuses, vendors and other small traders said that they were compelled to come out as no government aid reached them in last eight days.

In Dhaka and Jashore drivers of rickshaws, buses, easy bikes and battery-run rickshaws demanded relief and resumption of movement of all transports. They also protested at the seizing of their vehicles during restrictions.

The government on Tuesday extended the restrictions on public movement and other activities for a week till April 28 midnight from April 21 midnight to contain the surge in Covid infections while increasing number of people and vehicles poured on roads violating the restrictions in the previous week of restrictions.

Witnesses said that people’s gathering continued to increase in public spaces while the police and other law enforcement agencies were seen reluctant to maintain the restrictions.

At some crossings, including Bijoy Sarani, New Market, Hatirpool, Airport, Mirpur 10, Karwanbazar, Farmgate, Asad Gate, Gulistan, Gulshan and Motijheel, a great number of vehicles like cars, microbuses, CNG-powered auto rickshaws, rickshaws, and motorcycles except only public buses were seen running on roads since morning, they said.

Assistant inspector general of police Md Sohel Rana, quoting movement pass data, said that over 1.6 lakh people took the pass in the 24 hours till 11:00am on Wednesday.

‘If I have no food for my family how could I stay indoors?’ said Billal Hossain, a 47-year-old CNG-run auto rickshaw driver in the city.

Asharaful Islam, a vendor at New Market, said that the government imposed the restrictions for safety from the coronavirus but it did not think about their survival.

‘I have three children and their sick mother in the house. How can I feed them when my earning has been nil for the last seven days?’ he said.

Hasina Begum, 55, a poor housemaid living in Karail slum, the largest in the city, said that the government had declared shutdown but did not ensure food for them in this time of Ramadan.

She said that after losing her job she was selling masks to maintain her family.

Under the banner of Rickshaw, Battery Rickshaw and Easy Bike Chalok Sangram Parishad, drivers formed a human chain in front of the National Press Club in the capital on Thursday, said a press release issued by the parishad.

At the event they alleged that the government did not take any step to help about 50 lakh drivers of rickshaws, battery-run rickshaws and easy bikes during the lockdown.

As a result drivers are being forced to come out to roads with their vehicles but they are facing seizure and vandalism of their transports, they continued.

The parishad leaders condemned these ‘attacks’ and urged the government to provide relief and financial support to these drivers.

Otherwise, they said, they would hold demonstrations across the country.

The New Age correspondent in Jashore reported that transport workers, under the banner of Paribahan Sangstha Sramik Union Jashore district unit, in a press conference on Thursday demanded ration and the opportunity to run their vehicles for the sake of their livelihood during the restrictions.

Selim Reza Mithu, the union’s general secretary, said that the government allowed other workers to continue their jobs maintaining health instructions but not them.

‘We are passing our days in utter hardship,’ he said, ‘and we’ll die unfed if this situation continues.’

State minister for disaster management and relief Enamur Rahman, however, said that the government had already allocated a handsome cash and food support for the poor under various programmes.

Among these, over Tk 21 crore was allocated as general relief cash for all unions and municipalities while another Tk 50 lakh for each city corporation in Dhaka and Tk 25 lakh for Gazipur and Narayanganj city corporations each.

‘A sum of Tk 452 crore under the Vulnerable Group Feeding programme has also been allocated,’ he said.

He further said that 1.25 lakh packets of dry food were prepared for distribution if needed.

Dhaka North city mayor Md Atiqul Islam said that he did not get any support from the government for the poor this year but still he had allocated Tk one lakh for each ward of the city.

‘I allocated Tk one lakh for each ward of the city on Tuesday from the city corporation fund and people would get the money from next week,’ he said.

The mobile courts, on an average, filed over 250 cases daily, according to press releases.

Bangladesh logged 98 more coronavirus deaths and 4,014 infections in the 24-hour period till Thursday morning counting the death toll at 10,781 and infections at 7,36,074 in the country.

On April 12, the government in a fresh order announced the closure of all government and non-government offices and financial institutions for eight days, imposing further restrictions on public movement and overall activities from 6:00am on April 14 to April 21 midnight to check the worsening COVID-19 situation.

As per a Cabinet Division circular, no one is permitted to move outside home without emergency and the operation of all modes of public transport, including international flights, is banned during the period of restrictions.

Industries have been, however, kept out of the purview of the shutdown.

The previous restrictions on public movement and business activities that had come into effect on April 5 was extended till April 14 amid widespread violations as many people came out of home while others went for shopping, crowding markets despite high risks of infection in the capital as in the other cities across the country.