NUMBERS OF THE MATCH 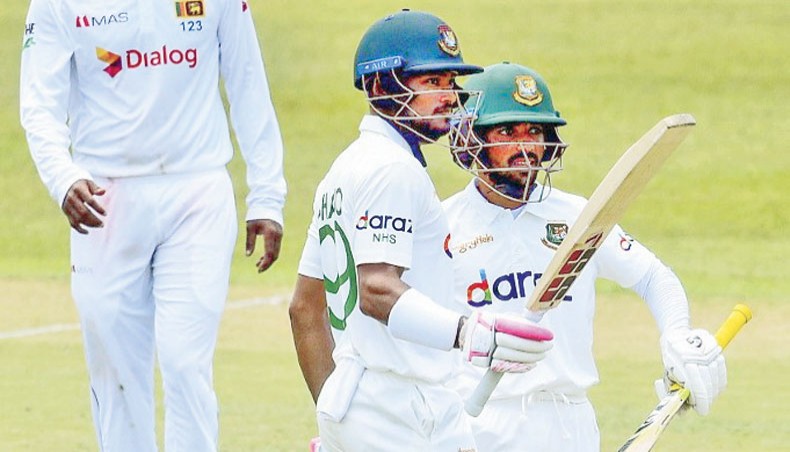 Bangladesh’s Najmul Hossain Shanto (C) celebrates after reaching 150 runs on the second day of their first Test against Sri Lanka at the Pallekele International Cricket Stadium in Kandy on Thursday.  — AFP photo

127 - Bangladesh Test skipper Mominul Haque made 127 in the first innings of the first Test against Sri Lanka in Pallekele, which is the left-hander’s first century in international cricket outside of home. Mominul’s previous highest score outside of Bangladesh was 77, which came in Potchefstroom against South Africa on September 2017.

242 - Mominul and Nazmul formed a 242-run stand for the third wicket in Bangladesh’s first innings, which is the highest third-wicket partnership in Tests for Bangladesh. The previous highest partnership was 236 runs, which was formed by Mominul and Mushfiqur Rahim against Sri Lanka on January 2018, in Chattogram.

304 - For the first time in his career, Mominul faced more than 300 balls in a Test innings as he faced 304 balls for his 127-run innings in the first innings of the first Test against Sri Lanka. Mominul’s previous best was 274 balls against New Zealand on October 2013, on route to playing his career-best 181-run innings.