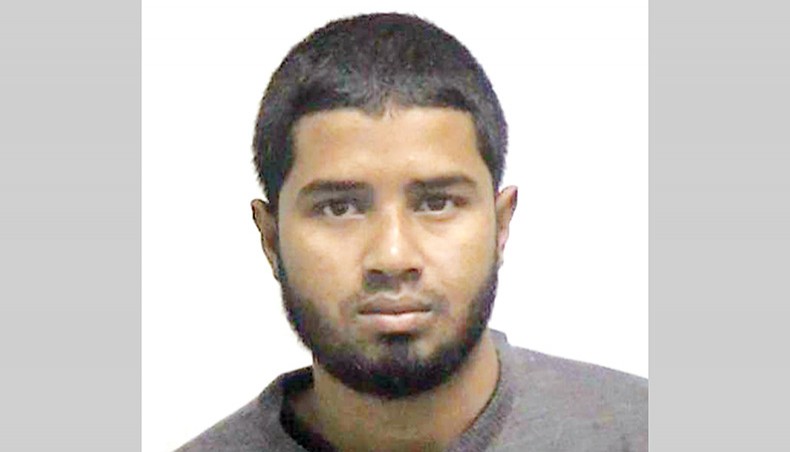 A Bangladeshi immigrant was sentenced to life in a US prison Thursday for a botched attempt to unleash carnage with a bomb attack in a crowded New York sub way passage in the name of the Islamic State group.

Akayed Ullah wounded himself and three other people in the December 11, 2017 blast in a tunnel below the Port Authority bus terminal near Times Square.

The bomb, which he strapped to his body with zip wires, failed to detonate as planned, and Ullah was left with burns to his torso and hands. His victims suffered minor complaints such as ringing in their ears and headaches.

The explosion sowed panic and disrupted the Monday morning commute during the busy Christmas tourism season, six weeks after a truck driver, also reportedly inspired by IS, killed eight people on a bike path.

Ullah, who migrated to the United States in 2011, was found guilty on all six counts by a Manhattan jury on November 6, 2018.

The 31-year-old’s convictions include supporting a foreign terrorist organization, using a weapon of mass destruction and bombing a public place.

Judge Richard Sullivan said that although Ullah ‘ultimately failed’ in the execution of the attack, it didn’t make him ‘less culpable.’

‘Your conduct was truly heinous. This is about as bad a crime as there is,’ he said, handing down the life sentence.

Ullah’s defence counsel had called for the mandatory minimum sentence of 35 years.

Ullah said what he had done was ‘wrong.’

‘I can tell you from the bottom of my heart I am deeply sorry for what I did,’ he told the sentencing hearing.

Ullah was caught on CCTV walking through the subway terminal and detonating the bomb strapped to his body. After his arrest, he allegedly told authorities: ‘I did it for the Islamic State.’

Ullah, a lawful permanent resident of the United States, built the bomb in his apartment, packing the device with metal screws and Christmas tree lights, having planned the attack for several weeks.

On the morning of the bombing, Ullah posted a statement on Facebook referring to the US president saying: ‘Trump you failed to protect your nation.’

A chilling handwritten note saying ‘O America die in your rage’ was found, along with metal pipes, wires and screws in his home, prosecutors said.

Ullah began to radicalize in 2014, three years after moving to the United States, by watching IS propaganda online before starting to research how to make bombs a year ago, officials said.

Prosecutors said he opposed US government policies in the Middle East and wanted to terrorize as many people as possible, deliberately choosing a week day when the area would be most crowded.