Tightening the noose around Syria 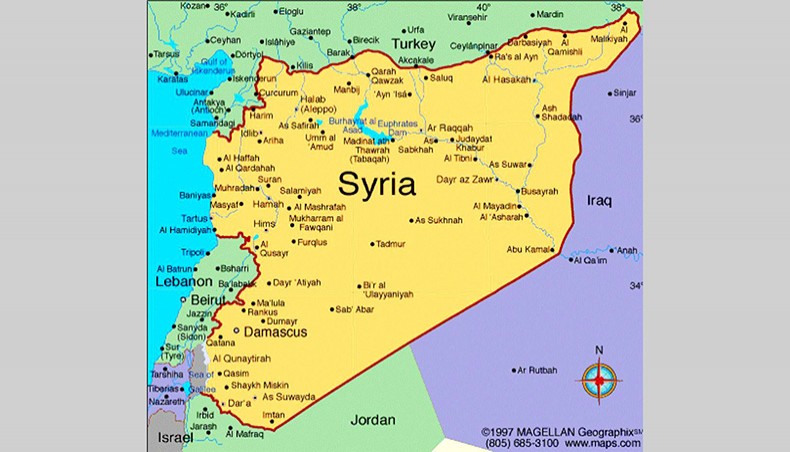 THE United States — with the help of Israel — has been repeatedly waging attacks on the high seas against oil tankers bound for Syria. In recent statements to parliament, Syria’s prime minister Hussein Arnous revealed that oil tankers loaded with crude allocated for Syria are being attacked or intercepted on the high seas. The goal is to aggravate the hydrocarbon crisis generated by the economic sanctions and the occupation of over 90 per cent of the territory where Syrian oil wells are located, he detailed.

Arnous revealed that seven tankers, some of them coming from Iran, were intercepted in the Red Sea and two others were intentionally attacked. This information was confirmed by the US press when the Wall Street Journal reported that Israel attacked at least a dozen ships carrying Iranian oil since the end of 2019. According to unidentified regional and US officials cited by the newspaper, Tel Aviv used water mines and other weapons to sabotage Iranian or other vessels carrying cargo in the Red Sea and other areas in the region. Those actions did not sink any tankers, but forced at least two of them to return to Iranian ports, and delayed the arrival of others in Syria, leading to oil derivatives crises.

THE US-Israel offensive campaign on the high seas is a component of a long-drawn-out economic war against Syria. This war started almost 18 years back. On December 12, 2003, US president George W Bush signed the Syria Accountability Act, which imposed sanctions on Syria unless, among other things, Damascus halted its support for Hezbollah and Palestinian resistance groups and ceased ‘development of weapons of mass destruction.’ The sanctions included bans on exports of military equipment and civilian goods that could be used for military purposes (in other words, practically anything). This was reinforced with an additional ban on US exports to Syria other than food and medicine, as well as a prohibition against Syrian aircraft landing in or overflying the United States.

On top of these sanctions, Bush imposed two more. Under the USA Patriot Act, the US Treasury Department ordered US financial institutions to sever connections with the Commercial Bank of Syria. And under the International Emergency Economic Powers Act, the US president froze the assets of Syrians involved in supporting policies hostile to the United States, which is to say, supporting Hezbollah and groups fighting for Palestinian self-determination and refusing to accept as valid the territorial gains which Israel had made through its wars of aggression.

The sanctions devastated Syria. In October 2011, The New York Times reported that the Syrian economy ‘was buckling under the pressure of sanctions by the West.’ By the spring of 2012, sanctions-induced financial haemorrhaging had ‘forced Syrian officials to stop providing education, health care and other essential services in some parts of the country.’ By 2016, ‘U.S. and E.U. economic sanctions on Syria’ were ‘causing huge suffering among ordinary Syrians and preventing the delivery of humanitarian aid, according to a leaked UN internal report.’ The report revealed that aid agencies were unable to obtain drugs and equipment for hospitals because sanctions prevented foreign firms from conducting commerce with Syria.

In order to strengthen internal opposition to the Syrian government, Bush signed the Foreign Operations Appropriation Act in 2005. This act required that a minimum of $6.6 million ‘be made available for programs supporting’ anti-government groups in Syria ‘as well as unspecified amounts of additional funds.’ By 2006, the Bush administration had been quietly nurturing individuals and parties opposed to the Syrian government in an effort to undermine the government of President Bashar al-Assad. Part of the effort was being run through the National Salvation Front. The Front included the Muslim Brotherhood. Front representatives were accorded at least two meetings at the White House in 2006.

Another Muslim Brotherhood front organisation that received US funding was the Movement for Justice and Development. Founded by former members of the Syrian Muslim Brotherhood, the group openly advocated regime change. Washington gave the Islamists money to set up a satellite TV channel to broadcast anti-government news into Syria. Hence, from 2005, the US government was secretly financing Syrian political opposition groups and related projects to topple the Syrian government.

In 2019, the United States introduced the Caesar Syrian Civilian Protection Act — a sanctions regime aimed at punishing those individuals and corporations assisting Syria in its revival of specific economic sectors. These sectors are: construction, electricity, and oil. Any company that deals with the Syrian government in any reconstruction effort will be sanctioned by the US Treasury Department and prohibited from accessing the US banking system — a virtual economic death sentence.

Since the law came into force on 17 June, 2021, the suffering of Syrians has greatly increased. Those who are close to starvation rose to 12.4 million, or 60 per cent of the population, according to the UN. Already, more than half a million children under the age of five are suffering from stunting as the result of chronic malnutrition. As the Syrian currency collapsed and prices rose by 230 per cent in 2020, Syrian families could no longer afford to buy basic foodstuffs such as bread, rice, lentils, oil and sugar.

AFTER former president Donald Trump’s incomplete withdrawal from Syria in October 2019, the American agenda altered from fighting ISIS to ‘protecting’ Syrian oil fields. Syrian oil and gas reserves and the infrastructure needed to exploit them are mostly located on the eastern bank of the Euphrates River in the Deir Ez-Zur and Hasakeh Governorates, although some oil wells are located elsewhere in the occupied Jazira region.

American corporations and contractors, keen to exploit Syria’s oil wealth, have infiltrated the area in an effort to plunder Syria while undermining government efforts to raise revenue for reconstruction. Only a handful of oil wells and gas fields remain in the hands of the central government. By occupying Syrian territory, US forces and their European allies hope to starve the Syrian government of desperately needed revenue as a means of subverting reconstruction efforts. While pre-war Syria was a modest oil exporter compared to its neighbours, Syrian oil reserves easily met domestic demand while accounting for nearly 20 per cent of the state’s annual budget revenues between 2005 and 2010.

In addition to the illegal occupation of Syria’s sovereign territories, American troops maintain a garrison at the border outpost of Al-Tanf in the Homs Governorate. This isolated piece of land extends beyond the reaches of Al-Tanf into the surrounding desert on the Syrian side of the border, spanning a total area of 55 kilometres. The value of the area lies in its proximity to the main highway linking Damascus to Baghdad. The American presence at Al-Tanf has closed this highway for most trade and traffic between the two countries. Before the outbreak of the war in 2011, Syria’s trade with Iraq alone was valued at $3 billion. The loss of the Al-Walid border crossing located inside the town thus represented a devastating blow to the Syrian efforts at economic reconstruction.

The Syrian government has on several occasions asked the US to withdraw from this area, although these requests have been ignored. In response, Syrian government troops have periodically tried to move into the Al-Tanf occupied zone as a means of persuading the squatters to pack up and leave. In one instance in May 2017, American fighter jets retorted to these manoeuvres with a barrage of airstrikes; dozens of Syrian soldiers were killed. The Syrian government condemned the attack, while Russia’s deputy foreign ministry slammed the action as a ‘completely unacceptable breach of Syrian sovereignty.’

No end in sight

THE US has not only occupied Syrian territories that are rich in oil — thus foreclosing the state from using oil revenues to rebuild its war-torn land — but has also seized regions that grow great fields of wheat, preventing the Assad administration from accessing harvests to feed bread to its population. There seems to be no end in sight to this brutal strangulation of Syria. The involvement of external powers in the country has produced a complex scenario marked by competing and conflicting interests.

The US, reflecting its ‘revolving door’ approach to al-Qaeda, has been unclear whether it wants the jihadist group to dominate the landscape in Syria but it has also been unwilling to be on the sidelines of the war. Israel wants Assad to be hit hard in order to hurt Iran and Hezbollah, its adversaries. On the other hand, it does not want Assad’s regime to be fatally wounded since this could possibly bring an al-Qaeda group to power in Damascus. Such an outcome is too dangerous. The West and Israel have been content to see Syria bleed and weaken. No outcome is desirable to them.

DissidentVoice.org, April 19. Yanis Iqbal is a student and freelance writer based in Aligarh.