Covid-19 and attitude towards death 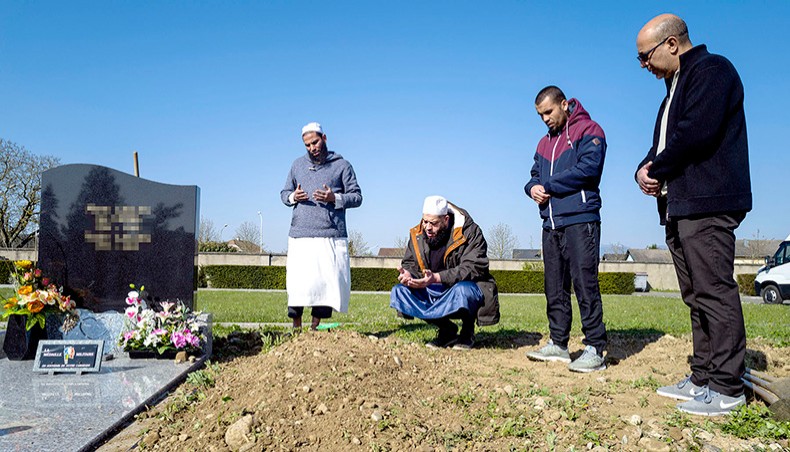 In this file photo taken on April 6, 2020, relatives say prayer at an Islamic funeral for a man victim of the Covid-19 in Wittenheim, eastern France, during a strict lockdown in France. — Agence France-Presse/Sebastien Bozon

IN 2020, a meme, popularly known as the ‘coffin dance’ stormed the internet. The meme is a video of a group of men in Ghana, dressed in funeral outfits, carrying a coffin and dancing. It was believed that dancing with the coffin at the funeral brings joy to the soul of the deceased. The ‘coffin dance’ group also went viral in Bangladesh when their photo was displayed on a big screen in Bashundhara city shopping mall to make people aware of the threats of Covid-19.

The ‘coffin dance’ meme speaks volume about our attitude towards death in recent times. The funeral ceremony is a universal cultural phenomenon which serves some core functions of society. Funeral ceremonies are a reminder that death is a reality for all of mankind, the value of human life is indisputable, and death is a shared experience. Traditionally, funeral ceremonies are ceremonial occasions to show love and respect and to demonstrate support to those who are left behind.

However, in recent times we see a shift in our attitude towards death. Referring to our attitude towards death, Charles Eisenstein, an American author, says on a popular podcast show ‘ours is a society of death denial, from its hiding away of corpses, to its fetish for youthfulness, to its warehousing of old people in nursing homes… the assumption that public policies should seek to minimise the number of deaths is nearly beyond question, a goal to which other values like play, freedom, etc are subordinate.’

In traditional, tightly-knitted communities, death has been part of public conversation and conscience. We remember our grandparents’ houses having a big entrance to the house so that it would be easier to carry the dead out of the house. The front courtyard was used to perform the mandatory bathing ritual for the dead. However, nowadays we see the professionalisation of the death industry where organisations like Anjuman Mufidul Islam prepare the body for burial rituals.

In addition, now, we witness an unprecedented expenditure of resources in the hope to prolong our life by delaying inevitable death. Anti-ageing products to stem cell injections, demand for these products has created a trillion-dollar market. Once only accessible to the rich, these inventions have also managed to lure the middle class to be consumers.

These changes in the social order shifted the values of younger people of our society. Young people find themselves detached from the ritual of death and collective feeling of grief to the extent that they hardly talk about death, let alone prepare for it.

One of the consequences of tabooing death as a topic of conversation is the rising suicide rate. According to the World Health Organisation, nearly 800,000 people committed suicide last year. Experts in Bangladesh have also tried to make the public aware of the rising number of suicides in our country. Young individuals are more susceptible to suicide, the core reason being not to be able to understand death as a collective experience and how it affects the ones who are left behind.

Furthermore, the attitude towards death has led the young generation to become ignorant about the Covid threats. It is a fact that the older age groups are more vulnerable to Covid-19. Thereupon, more than half of the people who have died of Covid-19 in Bangladesh are over 60 years old, according to the daily virus update released by the Directorate General of Health Services. It is, however, the young people who are generally the carrier and contributing to the rapid spread of the virus. The new variants of Covid-19 are now spreading faster than the previous one, infecting young people more.

Despite the threats, we see young people are careless and have generally very little regard for the health safety measures that are in place to prevent the contagion. Restaurants, shopping malls and other public places are persistently bombarded with a high number of visitors. Loitering without face masks and without maintaining safe physical distance has become an acceptable behaviour in the country. These acts of nonconformity led the government to enforce a lockdown for the second time.

Epidemiologically speaking, older people in Bangladesh are more likely to use health services than younger people. The lower mortality and morbidity rate among young people is likely to be the reason. The pattern was consistent during the first wave of Covid-19 in Bangladesh. The recent spike of Covid-19 infection saw a demographic shift, and many young people are now being infected, occupying hospital beds, making already vulnerable older groups more vulnerable.

All the aforementioned experiences and behaviours of young people show how distant we are from life. Young people are on the verge of forgetting the very basic facts that life and death are shared experiences. The change in attitude towards death not only has a short-term consequence of Covid surge, but it also has changed a fundamental part of our being.

All things considered, let us hope that the disruption caused by Covid-19 could inspire young individuals to adhere to the values of collectivity so that we could tackle the coming days of Covid-19.

Md Aftab Alam is a lecturer at the department of economics and social science in BRAC University.