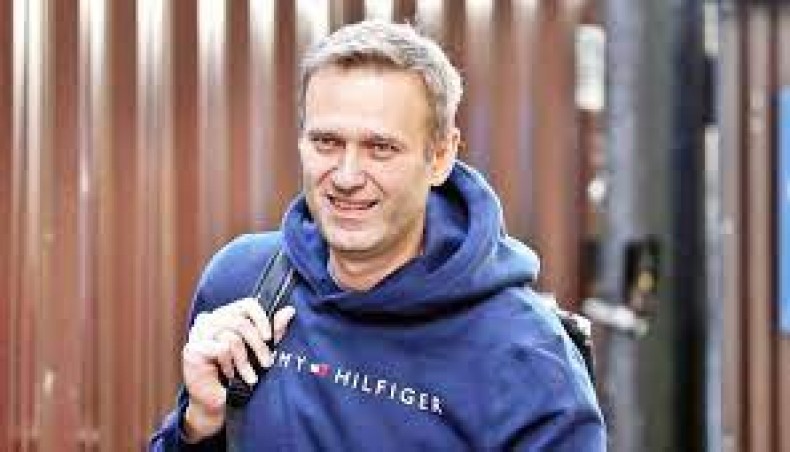 Thousands of people took to the streets Wednesday to demand freedom and proper medical attention for Navalny, who has been on a hunger strike for three weeks in a penal colony outside Moscow.

The opposition staged unauthorised demonstrations in dozens of Russian cities, with the largest rallies in Moscow.

Kremlin spokesman Dmitry Peskov told reporters Thursday that he saw ‘no reason’ to comment on the protests.

‘I am not aware that anywhere the rallies were held in a legal manner,’ Peskov said.

He added that the ‘main event of yesterday’ was president Vladimir Putin’s televised state of the nation address.

In his annual speech to lawmakers and regional governors, which lasted close to 80 minutes, Putin made no mention of Navalny or the protests.

The OVD-Info monitoring group, which tracks detentions at opposition protests, said that by Thursday afternoon it had recorded the detentions of at least 1,791 people in 98 cities.

In Russia, participation in unauthorised demonstrations can lead to a fine or several days in jail.

The majority of the detentions  —  806  —  took place in Saint Petersburg, where police violently dispersed crowds with shock sticks.

Navalny’s press secretary Kira Yarmysh was among those detained. She was given a 10-day stint behind bars for calling on people to join unauthorised rallies.

Key Navalny aide Lyubov Sobol was also taken into police custody ahead of the rally in Moscow and is due to appear in court next week.

Rights group Amnesty International on Thursday condemned ‘the crackdown on peaceful protesters’ and the use of ‘excessive force, including tasers’ in dispersing the crowds.

In a statement, the group called for the ‘immediate’ release of Navalny and those detained at the demonstrations.

Wednesday’s rallies did not match in size those held in the winter when Navalny was arrested after returning to Russia from Germany.

Tens of thousands took to the streets despite freezing temperatures while more than 11,000 people were detained.

Navalny, 44, was arrested when he returned to Russia in January after months recovering in Germany from a near-fatal nerve agent poisoning he blames on the Kremlin — an accusation it rejects.

He was sentenced to two-and-a-half years over an old fraud conviction and has been serving time in a penal colony about 100 kilometres east of Moscow.

His health has been failing since he launched his hunger strike to demand proper medical care for a range of ailments, including back pain and numbness in his limbs.

In a letter to the Council of Europe, she said there were no instances of ‘cruel or degrading’ treatment towards Navalny.

Moskalkova also said that since Navalny started refusing food, he has been under the ‘increased control of doctors’.

Navalny’s personal doctors have been unable to examine their patient despite several times waiting outside his prison colony.