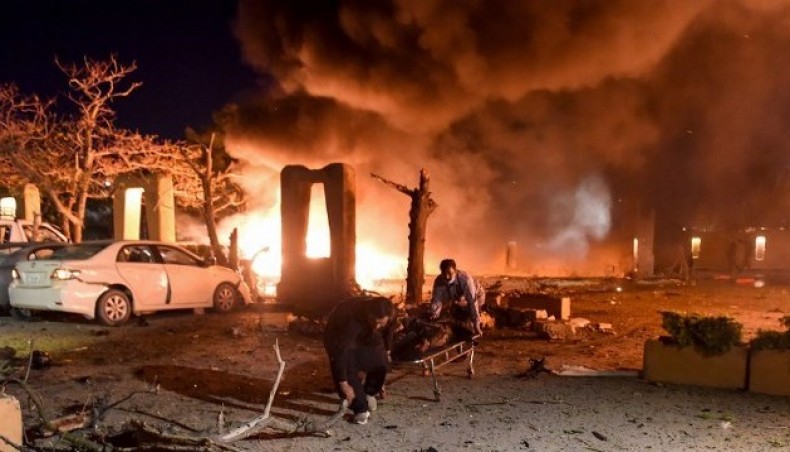 Volunteers carry an injured victim on a stretcher at the site of an explosion in Quetta on April 21, 2021. — AFP photo

The Pakistani Taliban claimed responsibility Thursday for a deadly suicide blast at a luxury hotel hosting the Chinese ambassador in the southwest of the country, as officials raised the death toll to five.

Beijing said it strongly condemned the attack, although the Taliban said Pakistan security officials were the target of the blast.

The bomber detonated the explosives late Wednesday while inside a vehicle in the car park of the Serena hotel — part of a five-star chain popular with diplomats and aid agencies — in the city of Quetta, capital of Balochistan province, police and the interior ministry said.

‘The suicide bomber hit the security officials exactly as it was planned,’ the spokesperson for Tehreek-e-Taliban Pakistan said in a statement.

The country’s interior minister confirmed a suicide bomber had carried out the attack, as he pinned the blame on a ‘foreign hand’.

‘Our agencies will fight the efforts which are being made in the neighbouring country to reorganise the TTP,’ said interior minister Sheikh Rashid Ahmed.

Pakistan frequently accuses India of using insurgent groups, including in Afghanistan, as proxy forces to wage an on-going shadow war between the arch-rivals.

In 2019 gunmen stormed a luxury hotel overlooking a flagship CPEC project — the deep-water seaport in Gwadar that gives China strategic access to the Arabian Sea — killing at least eight people.

And in June, Baloch insurgents targeted the Pakistan Stock Exchange, which is partly owned by Chinese companies. Both attacks were claimed by the Balochistan Liberation Army.