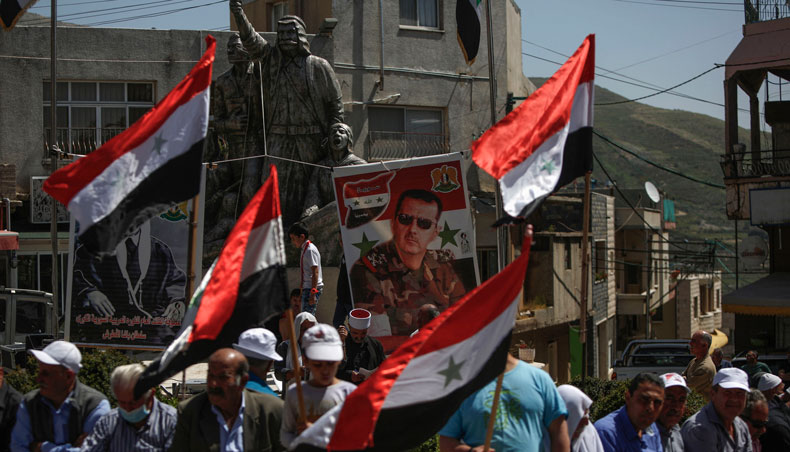 Druze residents of the Israeli-annexed Golan Heights gather during a rally in the village of Majdal Shams to mark Syria’s Independence Day, on April 17, 2021. — AFP photo

‘A surface-to-air missile was fired from Syria to Israel’s southern Negev,’ the Israeli Defence Force tweeted.

‘In response, we struck the battery from which the missile was launched and additional surface-to-air batteries in Syria,’ they added.

Syrian state media outlet Sana said the Israeli fire came from the Golan Heights and was targeted ‘towards positions in the vicinity of Damascus’.

While there were no immediate reports of any Israeli wounded or physical damage, sirens sounded earlier near Abu Qrenat village, in the vicinity of the Dimona nuclear site.

Israel has never disclosed its nuclear arsenal, but foreign experts claim the Jewish state has between 100 to 300 nuclear warheads.

Quoting a military source, the news outlet said that four soldiers were wounded, adding there were ‘some material losses’.

Since the outbreak of the Syrian civil war in 2011, Israel has routinely carried out raids in Syria, mostly targeting Iranian and Lebanese Hezbollah forces as well as government troops.

Israel rarely confirms strikes in Syria, but its army has said it hit about 50 targets in the war-torn country last year, without providing details.

In late February, Israeli air strikes targeted the area of Sayyida Zeinab south of Damascus, where Iranian Revolutionary Guards and Lebanese Hezbollah are present, the Observatory said, without reporting any casualties.