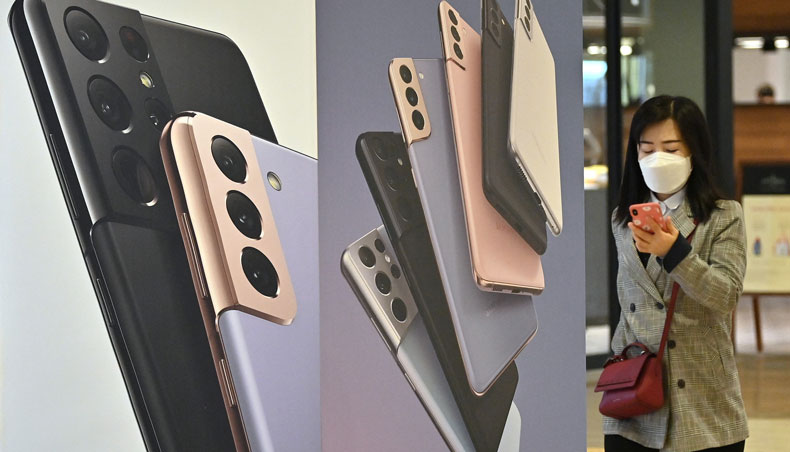 In this file photo a woman walks past an advertisement for the Samsung Galaxy S21 smartphone at the company’s showroom in Seoul on April 7, 2021. — AFP photo

The jailed de facto leader of the giant Samsung group went on trial Thursday over a stock manipulation case that effectively puts South Korea’s system of conglomerate control in the dock.

Samsung — whose flagship subsidiary is among the world’s biggest smartphone and computer chip makers — is by far the largest of the family-controlled empires known as chaebols that dominate business in South Korea, the world’s 12th-largest economy.

Chaebol families often have only a small ownership stake in their empires, but maintain control through complex webs of cross-shareholdings between units.

Lee Jae-yong, the vice-chairman of Samsung Electronics and the grandson of the group’s founder, is accused of stock manipulation, breach of trust and other offences when two other subsidiaries, Samsung C&T and Cheil Industries, merged in 2015.

Lee — who had emergency surgery for appendicitis last month, delaying the proceedings — looked gaunt in court, reports said, and wore a dark suit with a white shirt.

Lee was the largest shareholder in Cheil Industries, and critics say Samsung sought to artificially lower the price of C&T to give him a bigger stake in the merged entity — a key part of the Samsung structure — consolidating his grip on the conglomerate ahead of his father’s death last year.

His lawyers have previously said that everything he did in connection with the merger was legal.

Lee is already serving a two-and-a-half year prison sentence for bribery, embezzlement and other offences in connection with the corruption scandal that brought down ex-South Korean president Park Geun-hye.

Samsung is crucial to South Korea’s economic health, and is active in sectors ranging from construction to healthcare to insurance.

But Vladimir Tikhonov, professor of Korean Studies at the University of Oslo, told AFP: ‘The most problematic aspect is the attempted continuation of the unchallenged dynastic rule over a company which is responsible over 20 percent of South Korea’s GDP.

‘Samsung’s main stakeholders are its shareowners, including the minor ones, its workers and South Korean society as a whole,’ he said, adding, ‘It is too big to be a dynastic property.’

Lee’s father, Samsung chairman Lee Kun-hee, died in October, leaving his heirs a vast fortune and an inheritance tax bill of around 13 trillion won ($11.7 billion), with the first instalment due by the end of this month.

Lee apologised last May for some governance issues at the group, pledging to ensure ‘there will be no more controversy over the succession’ and that he would not allow his children to take over from him at the firm.

In the past, some chaebol leaders convicted of various offences have subsequently received presidential pardons in recognition of their economic roles.

Some scholars have said a leadership vacuum could hamper Samsung Electronics’ decision-making on future large-scale investments, which have been key to its global rise.

And a business grouping whose members include the leaders of the second-biggest chaebol Hyundai Motor and steel firm POSCO, ranked sixth, last week called for a special pardon for Lee, saying his absence would bring ‘adverse effects to the South Korean economy and industry as a whole’.

Seoul’s finance minister Hong Nam-ki said he had passed the proposal to ‘those with authority’, implying the presidential Blue House.

Despite Lee’s absence, Samsung Electronics has flagged a leap of 44.2 per cent in first-quarter operating profits, with robust sales of smartphones and the coronavirus-driven working from home boosting demand for devices powered by its chips.

A pardon for Lee would not be justified, Tikhonov said.

‘The company’s bureaucracy is fully capable of meeting day-to-day challenges even with the head boss being out of office,’ he said, adding, ‘We need to establish a precedent of the rule of the law equally applied to everybody, regardless of the size of their fortune. The pardon won’t be conducive to this socially important goal.’