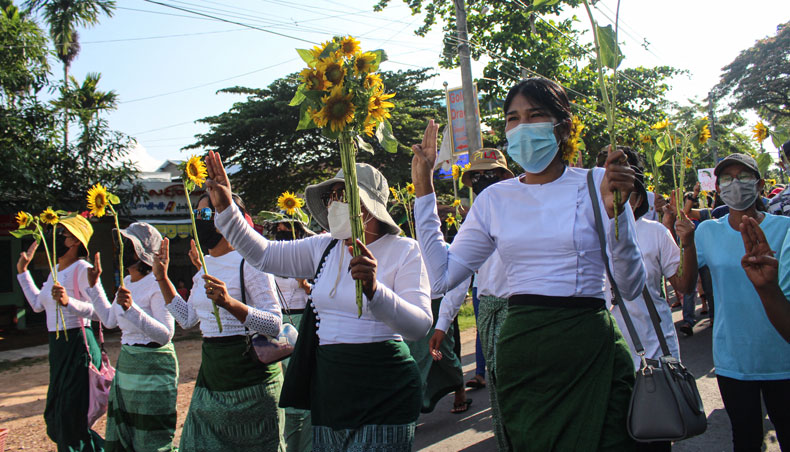 This hand-out photo taken and released by Dawei Watch on April 21, 2021 shows protesters holding sunflowers during a demonstration against the military coup in Dawei. — AFP photo

The Myanmar military’s crackdown on anti-coup protesters has displaced close to a quarter of a million people, a United Nations rights envoy said on Wednesday.

The junta has stepped up its use of lethal force to quash mass demonstrations against a February 1 coup which ousted civilian leader Aung San Suu Kyi.

At least 738 people have been killed and 3,300 are languishing in jails as political prisoners, according to a local monitoring group.

‘Horrified to learn that the junta’s attacks have already left nearly a quarter of a million Myanmar people displaced, according to sources,’ UN special rapporteur on the situation of human rights in Myanmar Tom Andrews tweeted on Wednesday.

‘The world must act immediately to address this humanitarian catastrophe,’ he added.

‘They all hide in the jungle nearby their villages,’ he said.

Free Burma Rangers, a Christian aid group, estimated at least 24,000 people were displaced in Karen state amid mortar ground attacks and airstrikes earlier in the month.

‘Even though the airstrikes have stopped, the ground strikes have increased,’ Free Burma Rangers director David Eubank told AFP.

He said many of the thousands displaced were subsistence rice farmers and would experience future food shortages if they are unable to safely return home to tend to their paddies.

‘You’re looking at a six-month problem of no food,’ he said, adding that some people were sleeping in caves or under banana trees.

Eubank said there were daily airstrikes in Kachin state in the country’s north and at least 5,000 people had been displaced in recent fighting.

Locals looking after the displaced people in some parts of Kachin state are worried about an upcoming shortage of food supplies.

‘We currently have 980 people from 27 villages. At this moment, we have difficulties with food storage,’ Brang Shawng, a leader from a camp in Kachin state, told AFP.

Amid mounting violence, Southeast Asian leaders and foreign ministers are set to hold talks on the Myanmar crisis in Jakarta on Saturday.

‘Min Aung Hlaing, who faces international sanctions for his role in military atrocities and the brutal crackdown on pro-democracy protesters, should not be welcomed at an intergovernmental gathering to address a crisis he created,’ said Human Rights Watch’s Brad Adams.

Overnight, authorities released freelance video journalist Ko Latt, who had been held in custody for a month in the capital Naypyidaw.

At least 70 reporters have been arrested since the coup and 38 are in detention, according to Reporting ASEAN.

Pro-democracy demonstrators donned blue shirts across Myanmar cities and towns on Wednesday in a united call to release all political prisoners.

‘I want all those who were arrested for protesting for the truth to be released,’ one Yangon doctor participating in the blue shirt protest told AFP.

In Washington, the US treasury department placed Myanmar state-owned timber and pearl businesses on its sanctions blacklist, saying they were used to generate revenue for the military regime.

The sanctions on Myanmar Timber Enterprise and Myanmar Pearl Enterprise — responsible for the country’s timber and pearl exports — aim to restrict their access to the global trading and financial system by forbidding US individuals and companies from doing business with them.

The sanctions also freeze property held by the two companies under US jurisdiction.

The United States ‘will continue to target specific funding channels and promote accountability for the coup and related violence,’ said secretary of state Antony Blinken.

Washington has already imposed targeted sanctions on Myanmar gem companies as well as leaders of the military who seized power in the February 1 coup.