Indonesia looking for missing submarine with 53 aboard 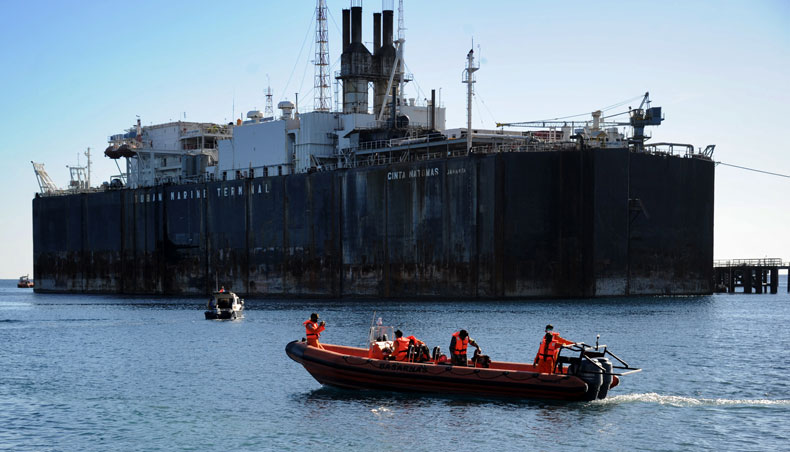 Members of the Indonesia Rescue Agency prepare to take part in the search operation for an Indonesian Navy submarine that went missing during military exercises off the coast of Bali, at Celukan Bawang port in Buleleng province on April 22, 2021. — AFP photo

Indonesia deployed warships on Thursday in the hunt for a navy submarine that went missing with 53 crew aboard off the coast of Bali, as other nations sent vessels to help with the search.

An oil spill where the vessel was thought to have submerged early Wednesday during regular exercises could point to damage, the navy has said, fanning fears that the Southeast Asian nation may be the latest country to suffer a fatal submarine disaster.

The German-built KRI Nanggala 402 was scheduled to conduct live torpedo exercises when it asked for permission to dive. It lost contact shortly after.

Navy spokesman Julius Widjojono said on Thursday that search teams were focused on an area around the oil slick, but that the exact location of the vessel had yet to be pinpointed.

‘It has not been found yet,’ Widjojono told AFP, adding, ‘But we’ve detected the area. Today, around 400 personnel have been deployed.’

Six warships and a helicopter have been sent out to look for the sub, the navy said.

Other nations including the United States, Australia, France and Germany have offered help.

‘We are obviously very concerned about these reports. It’s very distressing for families and particularly for the Indonesian navy,’ Australian foreign minister Marise Payne told broadcaster ABC, adding, ‘We’ve indicated that we will help in any way we can.’

Neighbouring Singapore and Malaysia have already dispatched rescue ships that are expected to arrive in the coming days, said military spokesman Achmad Riad.

There were 53 crew aboard the vessel, which was believed to be in waters about 700 metres deep.

French navy vice admiral Antoine Beaussant told AFP earlier that the submarine was not built to withstand such a depth.

‘If it went down to rest at 700 metres the likelihood is it would have broken up,’ he said.

Indonesia, which has been moving to upgrade its ageing military equipment in recent years, has five German and South Korean-built submarines in its fleet.

It is a Type 209 diesel-electric attack submarine that has served in more than a dozen navies around the world, including Greece, India, Argentina and Turkey, over the past half century.

While Indonesia has not previously suffered a major submarine disaster, other countries have been struck by accidents in the past.

Among them was the 2000 sinking of the Kursk, the pride of Russia’s Northern Fleet.

That submarine was on manoeuvres in the Barents Sea when it sank with the loss of all 118 aboard. An inquiry found a torpedo had exploded, detonating all the others.

Most of its crew died instantly but some survived for several days — with a few keeping heart-breaking diaries written in blood to their loved ones — before suffocating.

In 2003, 70 Chinese naval officers and crew were killed, apparently suffocated, in an accident on a Ming-class submarine during exercises in 2003.

Five years later, 20 people were killed by poisonous gas when a fire extinguishing system was accidentally activated on a Russian submarine being tested in the Sea of Japan.

And in 2018, authorities found the wreckage of an Argentine submarine that had gone missing a year earlier with 44 sailors aboard.

The wreck of a French submarine that had gone missing with 52 sailors on board in the Mediterranean in 1968 was found in 2019.