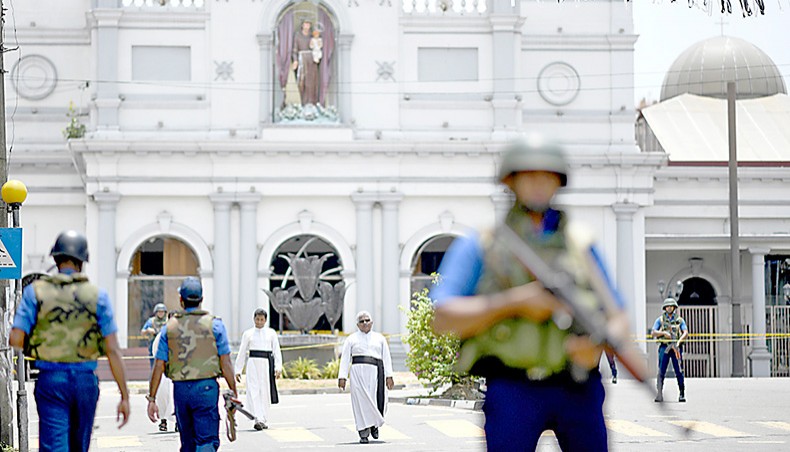 THE government was elected on a platform that stressed national security and unity. The elections took place in the aftermath of the Easter suicide bomb attacks of 2019 that caused the highest number of casualties in Christian churches. As the bombers were all Muslim, the Muslim population in the country came under public suspicion which was spontaneous and widespread. There was also equally widespread fear and anxiety about follow on attacks that could target Christians in particular and also the population in general. The cause of the attacks and the master minds behind them were a mystery then, as they are now.

Due to the timely intervention of Cardinal Malcolm Ranjith, Archbishop of Colombo, in whose diocese the two most serious attacks took place, there was no retaliation against the Muslim population by those who had lost their kith and kin. However, in the weeks that followed, there were mob attacks against the Muslim community in parts of the country that were distant from the bomb attacks. These attacks were not spontaneous but organised and intended to loot Muslim property and cause fear in them. The government, which was under political siege for having failed to prevent the suicide bomb attacks, failed once again to adequately protect the Muslim community.

It is in this context that Cardinal Malcolm Ranjith’s statement on the occasion of the second anniversary of the Easter bombings takes on significance. About two months ago he gave a deadline by which he asked the government to identify who was behind the Easter attacks and the cause for them. The Cardinal has consistently spoken up on the issue of the Easter bombing, first to ask for restraint on the part of the victims, then to ask the government to identify the perpetrators and prior to the elections to take the position that the people needed a government that could protect them. Now he has said that ‘Our brethren were attacked not by religious extremism, but by a group that exploited it to use the attackers as pawns in order to strengthen their political power.’

TWO years after the Easter bombings in which they were branded as supporters of religious extremism, the Muslim community seeks in many different ways to overcome the suspicion that once engulfed them and which they fear can do so again. The use of the black Islamic dress that was an increasing trend among Muslim women has been much reduced. Muslim organisations are making energetic efforts to network with other religious organisations, join inter-religious groups and to liaise with civil society. They make available to them the Islamic teachings on peace and coexistence. This weekend I was invited to the opening of a community centre in the Kurunegala District by a Muslim organisation.

On the walls of the community centre there were panels put up with sayings from the different religions on a number of important matters, such as how to treat others, and the role of spiritual values in everyday life. The foremost place at the opening ceremony was given to Buddhist monks who had come to attend the ceremony along with government officials and police officers. The monks who spoke said that the Muslim community living in the village had good relations with the Sinhalese living in the neighbouring villages, and this had continued for generations. Another monk said that after the Easter bombings they had heard there were violent gangs heading in the direction of the Muslim village, they had come there to ensure no harm would befall those people.

In this context, the announcement that the government will ban 11 Muslim organisations sends a negative message to the country at large about the Muslim community. It creates an impression that Muslims organisations are under suspicion and possibly even close to performing acts of violence which necessitates them being banned. Of the 11 banned organisations, two are foreign ones, the Islamic State and Al Qaeda which have been reported internationally as engaging in violence. However, the other nine are Sri Lankan organisations which do not have a track record of violence or illegality. Four of them have the name ‘Thowheed’ in them, which in the Arabic language means ‘faith’.

THE ban on these Thowheed organisations may be due to the fact that the leader of the suicide squad, Zahran, was part of an organisation that had the name ‘Thowheed’ in it. The ban on them may also be due to the fact that the Commission of Inquiry into the Easter bombings recommended such action against them. However, the commission also recommended that other non-Muslim organisations be banned which has not happened. This suggests that the Muslim organisations are being treated differently. The danger is that when it treats organisations differently, the government may be generating resentment in the Muslim community, especially the youth. If the words of Cardinal Malcolm Ranjith are correct, the problem lies not in Muslim extremism, but in partisan power politics.

Sri Lanka has experienced Sinhalese youth insurrections twice and even the Tamil militant movement was started by youth, who were once called ‘the boys’. Perhaps in anticipation of such a radicalisation phenomenon, the government has recently passed an add-on called the ‘De-radicalisation from holding violent extremist religious ideology’ to the Prevention of Terrorism Act. This will permit people who fall into its ambit to be sent to rehabilitation centres for up to two years without trial. This may provide the government with an opportunity to release up to 250 Muslim citizens currently under detention on suspicion of being involved in the Easter bombings and send them for rehabilitation. On the other hand, this regulation may be used in the future in regard to other persons and other groups. The better way to prevent radicalisation is to make people feel that the law is even-handed to all, and also to encourage engagement between communities.

During the discussion that took place at the opening of the community centre in Kurunegala, it was noted that the younger generation had fewer inter-community linkages than those of older generations. This may be due to the changing nature of society and the economy where people spend less time with other people and more time with machines or doing narrow and specialised jobs. In multi-ethnic and multi-religious societies in which there are conflictual relations, the tendency on the part of those from different communities will be to live in their own silos rather than interact with those of other communities. Living in peace in plural societies requires purposeful and energetic interaction which is organised. Where there has been ethnic and religious strife the world over, the better answer has been to provide people with encouragement and incentives to mix together, which is what the Muslim organisation in Kurunegala was trying to do.