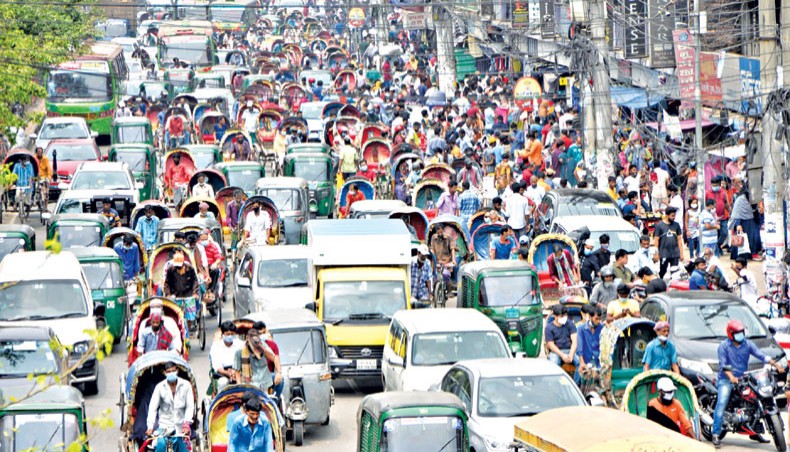 Vehicles get stuck in a traffic jam in front of Dhaka College on Mirpur Road in the capital on Saturday, April 10, 2021, amid the government restrictions to stop COVID-19 spread. — New Age file photo

Public movement and gathering on the streets of the city and elsewhere in Bangladesh continued increasing on Wednesday, the last day of the current eight-day restrictions.

Police officials said that average over two lakhs people went out of home with permission while many others without permissions and some others out of restrictions coverage.

Amid the situation the government on Tuesday extended the ongoing restrictions on public movement and other activities for a week till April 28 midnight to contain the surge in Covid-19 infections.

He said that the updated data was yet to be available that would show how many people took passes for Wednesday.

Commuters said that they had to wait 15-20 minutes in some intersections including Bijoy Sarani, Karwanbazar, Farmgate, Asad Gate, Gulistan, Gulshan and Motijheel as huge number of light vehicles including cars, CNGs, motorcycles and microbuses were continued plying on city roads.

Thousands of businesses of roadside markets opened in the morning while people also were seen gathering in kitchen markets and makeshift kitchen markets in residential areas, including Mirpur, Mohammadpur and Kathalbagan.

The mobile courts, on an average, filed over 250 cases daily.

An inter-ministerial meeting with cabinet secretary Khandker Anwarul Islam in the chair on Monday decided to extend the current restrictions on public movement and overall activities by a week to contain the spread of Covid-19.