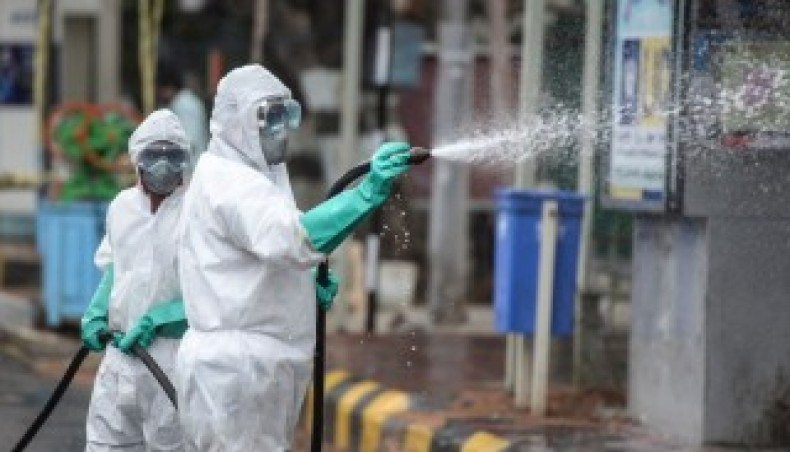 Members from the Disaster Response Force of Telangana State, wearing protective gear spray disinfectant on a street against the spread of COVID-19 in Hyderabad on April 19, 2021. — AFP photo

Highlighting the strain on health authorities, 22 patients died in a hospital after an oxygen leak cut off the supply to 60 ventilators for half an hour, officials said.

India has been in the grips of a second wave of infections blamed on lax government rules and a new ‘double mutant’ virus  variant, adding almost 3.5 million new cases this month alone.

Health ministry data on Wednesday showed a record 2,023 fatalities and 2,95,000 new cases in 24 hours, among the world’s biggest daily case totals and on a par with numbers seen in the United States during a deadly surge in January.

Meanwhile, the novel coronavirus has killed at least 30,46,134 people since the outbreak emerged in China in December 2019, according to a tally from official sources compiled by AFP at 1000 GMT on Wednesday.

Based on latest reports, the countries with the most new deaths were Brazil with 3,321 new deaths, followed by India with 2,023 and United States with 750.

In an address to the nation on Tuesday night, prime minister Narendra Modi said that the country of 1.3 billion people was ‘once again fighting a big fight’.

‘The situation was under control till a few weeks back, and then this second corona wave came like a storm,’ he said.

There had been hopes that despite its packed cities and poor health care, India had managed to dodge largely unscathed a pandemic that has killed more than three million people around the world.

Production of key coronavirus drugs slowed or even halted at some factories and there were delays inviting bids for oxygen generation plants, according to press reports.

Distraught relatives are now being forced to pay exorbitant rates on the black market for medicines and oxygen and WhatsApp groups are white-hot with desperate pleas for help.

‘I am scared for my parents and relatives more than I am scared for myself because they are not young anymore and getting admitted into a hospital right now is next to impossible,’ one Delhi resident said.

Delhi chief minister Arvind Kejriwal tweeted late Tuesday that some hospitals in the capital ‘are left with just a few hours of oxygen’.

Hospitals in the western state of Maharashtra and its teeming capital Mumbai were also experiencing dire shortages, press reports said.

‘Normally we would shift some patients to other hospitals... none in the city have spare oxygen,’ NDTV quoted one doctor in the state as saying.

‘Most of the patients are being sent back because we don’t have enough of this oxygen and remdesivir drug to treat the patients,’ said Harish Krishnamachar, associate dean of the Ramaiah Medical College Hospital in Bangalore.

States across India have imposed restrictions, with Delhi in a week-long lockdown, all non-essential shops shut in Maharashtra and Uttar Pradesh set for a weekend shutdown.

Delhi’s lockdown prompted tens of thousands of migrant workers to flee the megacity, in scenes reminiscent of the national shutdown a year ago that inflicted economic and human misery.

Thousands of protesters mass outside the German parliament as lawmakers prepare to vote on a law amendment giving Angela Merkel’s government power to impose tougher measures to curb the pandemic.

A first batch of vaccine doses is expected to arrive in war-torn northwestern Syria, where millions of people live in dire humanitarian conditions.

Disneyland Paris, normally Europe’s biggest tourist attraction, will from Saturday host a mass vaccination site at its convention centre as France seeks to speed up its inoculation drive.

Russian president Vladimir Putin says in his state of union address that the country is aiming for herd immunity by the autumn and hails the homegrown development of three vaccines.

Nepal’s former king and queen, aged 73 and 70, test positive on their return from India’s Kumbh Mela religious festival attended by millions of pilgrims.