US advises against India travel as coronavirus cases surge 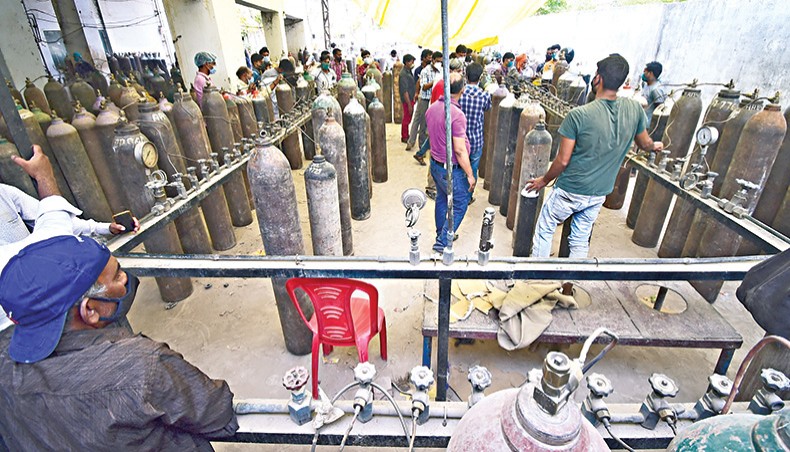 The United States has warned against travel to India, where authorities on Tuesday imposed tighter restrictions to combat an explosion of Covid-19 cases.

India has recorded more than three million new infections and 18,000 deaths this month, bringing its caseload to the world’s second-highest, after the United States.

The updated US travel advisory comes after the State Department announced Monday it would apply ‘do not travel’ guidance to about 80 per cent of countries worldwide, citing the unprecedented risk posed by the pandemic.

‘Even fully vaccinated travellers... should avoid all travel to India,’ the US Centres for Disease Control and Prevention said.

These moves follow Britain’s decision on Monday to add India to its ‘red list’, and Hong Kong’s ban on all flights from the country.

Meanwhile, the novel coronavirus has killed at least 30,31,441 people since the outbreak emerged in China in December 2019, according to a tally from official sources compiled by AFP at 1000 GMT on Tuesday.

Based on latest reports, the countries with the most new deaths were India with 1,761 new deaths, followed by Brazil with 1,347 and Poland with 601.

India has been struggling to rein in its raging outbreak, with hospitals running out of beds and the government forced to reimpose economically painful restrictions.

Its capital and worst-hit city New Delhi entered a week-long lockdown on Monday, with parks, cinemas and malls closed.

‘Delhi’s health system is at a tipping point,’ said chief minister Arvind Kejriwal, who on Tuesday went into self-isolation after his wife tested positive.

The lockdown announcement prompted tens of thousands of migrant workers to flee Delhi, in scenes reminiscent of the national shutdown a year ago that inflicted economic and human misery.

Mumbai’s home state of Maharashtra, the epicentre of the recent surge, on Tuesday further tightened restrictions on grocery shops and home deliveries.

All non-essential shops and malls in the western state are currently shut until May 1.

Uttar Pradesh, home to some 240 million people, on Tuesday announced a weekend lockdown from Friday evening, whilst Telangana state in the south became the latest to impose a night curfew.

Former Indian prime minister Manmohan Singh, 88, was admitted to hospital with the virus on Monday. Officials said Tuesday that his condition was stable.

In a sign of how dangerously overstretched the hospitals are, people are using social media to appeal for medical supplies for their relatives.

Experts have warned that religious festivals and packed state election rallies in India have become ‘superspreader’ events — and some have said mass vaccinations are the only long-term solution.

India kicked off its inoculation drive in mid-January and has administered more than 127 million shots so far to a population of 1.3 billion people.

From May 1, all adults will be able to get vaccinated, the government announced Monday.

‘It’s about time! I think this should’ve been done much sooner,’ Mumbai-based screenwriter Nisha Kalra, 28, said.

‘Knowing we can get vaccinated has immediately reduced the stress, panic and horror of the last few weeks.’

Some local authorities have however been running short of supplies, and India has put the brakes on exports of the AstraZeneca shot.

Meanwhile India’s Bharat Biotech said Tuesday that it is scaling up production of its homegrown Covaxin vaccine to 700 million doses per year.

Covaxin is being administered alongside the AstraZeneca vaccine in India, while approval has also been given for the Russian Sputnik V.

Bharat said that emergency approval for Covaxin has been given approval in several countries including Mexico, Philippines and Iran, and is pending in the United States and several European countries.

Europe’s drug regulator was expected to rule Tuesday on the safety of the Johnson & Johnson Covid-19 vaccine after fears it could be linked to extremely rare blood clots, as the US drugmaker said it was ‘very confident’ in its shot.

The announcement was expected as an EU official promised to have enough vaccines in hand to inoculate the majority of European adults by the summer — a boon for the continent’s sluggish rollout.