Either you’re in or you’re out: Infantino to Super League clubs 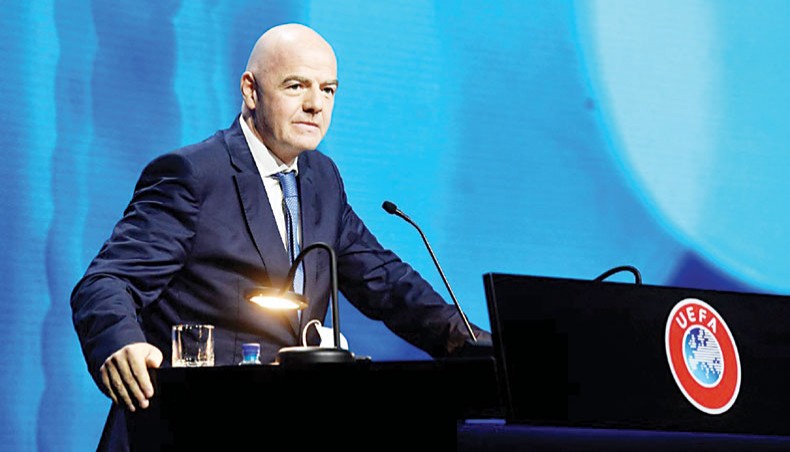 Twelve major clubs launched plans Monday for a new breakaway league which would drastically change the landscape of the world’s most popular sport.

‘At FIFA we can only and strongly disapprove the creation of the Super League, of a Super League which is a closed shop, a breakaway from the current institutions, from the leagues, from the associations, from UEFA, and from FIFA,’ Infantino told a UEFA congress in Switzerland.

‘There is no doubt whatsoever of FIFA’s disapproval for this.’

UEFA has said the teams would be banned from domestic and other European competitions, including the Champions League.

Real Madrid president Florentino Perez, the head of the new ESL, has insisted that would be ‘impossible’, but Infantino threatened action as FIFA took a stronger stance than it did with its initial statement when the news first broke.

‘It is our task to protect the European sport model, so if some elect to go their own way then they must live with the consequences of their choices,’ said Infantino.

‘They are responsible for their choices.

‘Either you’re in or you’re out. You can’t be half in and half out. Think of it, this has to be absolutely, absolutely clear.’

UEFA president Aleksander Ceferin said there was still time for clubs to pull out, addressing the owners, particularly of the Premier League teams involved, and saying they could row back on their ‘mistake’.

‘Gentlemen, you made a huge mistake,’ said Ceferin, who had launched a withering attack against the ESL clubs on Monday.

‘Some will say it is greed, some complete ignorance of England’s football culture. There’s still time to change your mind. Everyone makes mistakes.

‘English fans deserve to have you correct your mistake, they deserve respect.’

The 15 founding ESL clubs, three of which are yet to be announced, would qualify automatically every season, with only five other places up for grabs each year.

‘We need those clubs. People need to know that everything is possible, everyone has a chance.

‘The big clubs today have not necessarily been big in the past. Football is dynamic and football is unpredictable, this is what makes it such a beautiful game.’