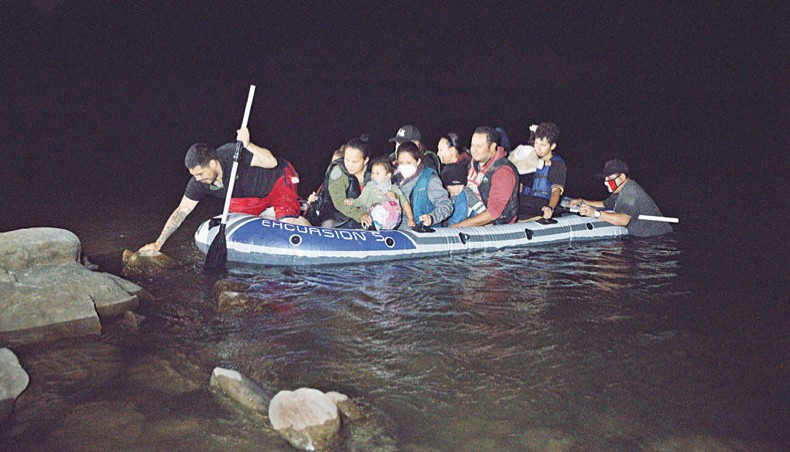 Immigrants arrive to the United States while being smuggled across the Rio Grande from Mexico on April 15 in Roma, Texas. A surge of mostly Central American immigrants crossing into the United States, including record numbers of children, has challenged US immigration agencies along the US southern border. — AFP photo

The number of migrant children trying to reach the United States from Mexico has increased ninefold since the beginning of the year, UNICEF said on Monday.

The rise from 380 to 3,500 youngsters registered at reception centres at the southern side of the border has overwhelmed the facilities, the UN children’s agency said.

‘It breaks my heart to see the suffering of so many young children, even babies, on the Mexican border with the United States,’ said Jean Gough, the fund’s director for Latin America and the Caribbean, who is based in Panama.

‘Most of the shelters I visited in Mexico are already overpopulated and cannot accommodate the growing number of children, adolescents and families migrating northwards,’ added Gough, following a five-day visit to the border.

or having been sent back from the northern side of the border, according to UNICEF.

Mostly coming from Honduras, Guatemala, El Salvador and Mexico, minors make up 30 per cent of total migrants — the highest such figure ever registered for children.

UNICEF said people traffickers ‘shamelessly exploit’ the desperation of families looking to escape gang and domestic violence, poverty, the effects of climate change and unemployment brought on by the coronavirus pandemic.

Migrants have spoken of abuses they suffered on their journey such as extortion, sexual assault, kidnapping and human trafficking, UNCIEF added.

‘Latin American families don’t emigrate, they’re fleeing... There’s nothing to entice them back so why would they return?’ added Gough.

UNICEF said more reception centres are needed on the border and an improvement in social conditions in Central America and poor regions of Mexico to reduce migration.