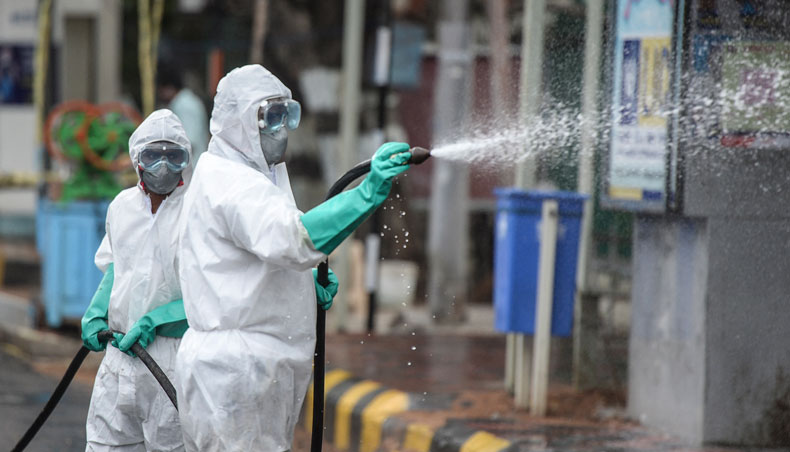 Members from the Disaster Response Force of Telangana State, wearing protective gear spray disinfectant on a street against the spread of COVID-19 in Hyderabad on April 19, 2021. — AFP photo

India locked down its capital New Delhi for a week beginning Monday night seeking to control a raging coronavirus outbreak, as the hard-hit United States made all adults eligible to receive the Covid vaccine.

There was good news from Australia and New Zealand as well, as the neighbours opened a travel bubble that will allow people to move between the countries without a mandatory quarantine.

And in Europe, Greece said it would welcome vaccinated travellers from some nations as it sought to restart its badly-bruised tourism sector, while Portugal and Slovenia peeled back virus restrictions as infections eased off.

But India is still facing skyrocketing infections, with hospitals running out of beds and the government forced to re-impose economically painful restrictions.

The capital New Delhi braced for a fresh lockdown as officials scrambled to get surging cases under control.

‘Delhi’s health system is at a tipping point. The Covid situation is pretty critical,’ Delhi chief minister Arvind Kejriwal said, adding, ‘If we don’t impose a lockdown now, we will be looking at a bigger disaster.’

Tens of thousands of migrant workers tried to flee the restrictions, fuelling fears they could spread the virus to their rural hometowns

The Delhi lockdown came after the vast nation of 1.3 billion reported a record high of 273,810 infections on Monday – the fifth consecutive day topping 200,000 cases.

India has the world’s second-highest caseload with more than 15 million known infections.

The government said on Monday it would make Cvodi vaccines available to all adults in the country from May 1, in a bid to beat back infections.

The soaring cases forced British prime minister Boris Johnson to cancel a planned visit to the country this month, and Britain said on Monday it would add India to its travel ‘red list’, banning all arrivals from India except for UK or Irish nationals.

The coronavirus has killed more than three million people, devastating the world economy and upending daily life since first emerging in China in late 2019.

The United States remains the hardest-hit nation, with more deaths and known infections than anywhere else.

But with president Joe Biden’s administration ramping up shots, it made all its over-18s eligible for vaccination beginning Monday.

‘We have enough of it, you need to be protected, and you need in turn to protect your neighbours and your family,’ Biden said in a video released by the White House.

‘So please: get the vaccine,’ he added.

The United States also passed a major vaccine milestone on Sunday, with roughly 130 million Americans — half its adult population — receiving at least one dose.

But its top pandemic adviser Anthony Fauci warned that the country remains in a ‘precarious position’.

‘We’re having a seven-day average of over 60,000 new infections per day. That’s a place you don’t want to be,’ he said on Sunday.

‘We also have to make sure that people don’t throw caution to the wind and declare victory prematurely,’ he added.

Neighbouring Canada illustrated the threat of a fresh coronavirus wave, as authorities scrambled to funnel additional health staff and equipment into Ontario to battle a surge in infections.

Ontario is Canada’s most populous province, and record cases are threatening to overwhelm its healthcare system.

Across the Atlantic, there were glimmers of hope in Europe, as Portugal said it was reopening shopping malls, high schools and universities and that restaurants and cafes were allowed to offer outdoor dining.

‘We are impatient to receive our customers again,’ said a happy Constanca Firmino, manager of a cosmetics shop in Lisbon.

Slovenia too eased restrictions after cases dropped, while Greece said some travellers from the EU, Britain, the United States, Israel, Serbia and the United Arab Emirates would not have to quarantine if they were fully vaccinated or had a negative Covid test.

Switzerland was also set to start the week with a step towards normality, with outdoor seating permitted at restaurants and bars and cinemas, sports facilities, and in-person classes at universities reopening.

In Slovakia, crowds poured onto the streets Monday as the nation that once had one of the world’s highest per capita Covid death rates emerged from a four-month lockdown.

And in Australia and New Zealand, there was joy and celebration as a long-awaited quarantine-free travel bubble opened across the Tasman Sea.

Family members tearfully reunited at airports in Sydney and Wellington, while others readied for their first outbound flights in more than a year.

‘I’ll yell, scream, cry, hug, kiss, feel happy – all of these emotions at once,’ Denise O’Donoghue, 63, told AFP as she prepared to board her plane in Sydney.

‘What normal is going to be from now on I don’t know, but I’m just really, really excited today,’ she added.