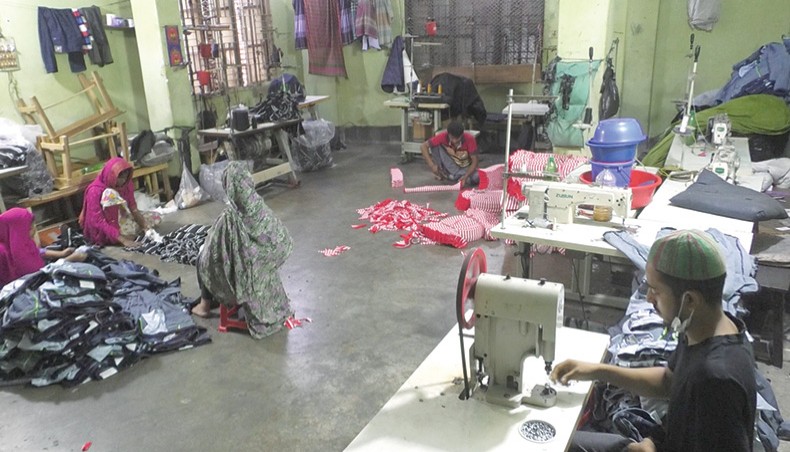 Employees work at a factory manufacturing garments for the local market at Keraniganj in Dhaka on Monday. — Abdullah Apu

Readymade garment and shoe manufacturers who meet domestic demand are struggling for the survival of their business as the fresh restrictions imposed by the government to contain COVID-19 infections have shattered their dream of rebounding from the past year’s setback.

The government decision to allow factories to run during the restrictions has failed to bring any positive result for the RMG manufacturers who meet the local demand due to a suspension of the sales as shops and markets have remained closed for the  restrictions across the country, said businesses.

They also said that markets and shops across the country should be opened after the week-long strict lockdown, otherwise most of the small and medium manufacturers would lose their business.

The government decided to keep the factories open following the demand from export-oriented garment manufacturers as they have no uncertainty over selling their products but the government did not consider the situation of the manufacturers who are meeting the local demand, Md Alauddin Malik, president of the Bangladesh Avhantarin Poshak Prostutkarak Malik Samity, a platform of businesses who produce garments for the local market, told New Age on Friday.

‘Such a decision does not make any sense as the government allowed factories to keep running and asked shops to keep closed. We produce for the local market, if the shops remain closed, where will the manufacturers sell their products?’ he asked.

Alauddin said that the export sector was undoubtedly important for the country but our sector which meets nearly 95 per cent of the domestic demand is not less important.

He said that it would be difficult for the local manufacturers to survive if they could not sell their ready products before Eid-ul-Fitr.

‘We request the government not to extend the lockdown period so that factory owners can sell their ready products before the Eid festival as the livelihood of 30 lakh people across the country depend on the domestic RMG sector,’ he said.

MH Mostofa, owner of Creseent Sellection at Urdu Road in Old Town of Dhaka in the city, said that they had been passing their days in severe hardship for the second year due to the fresh of COVID-19.

‘Like the previous year, the restrictions have been imposed this year when we already have invested and produced products for the Eid festival. I do not know how I will survive,’ he said.

Mostofa said that his factory was sitting on a stockpile of ready products and at least 55 workers were waiting for payments.

It will not be possible to pay workers if markets and shops are not opened shortly, he said.

‘We have no need to run our factories at this time as we have already produced for the Eid festival and now, opening shops is important to protect the small manufacturers who produce for the local market,’ Mostofa said.

Mostofa said that he incurred a loss worth more than Tk 2 crore due to the restrictions on business in 2020 and 2021.

Many of the small factory owners have become bankrupt and some of them are suffering from mental disorder due to loans taken from banks and individuals, he said.

He alleged that the government policy was supportive only to the big ones.

Mir Mahabub Rony, owner of Rony Shoe and Sandal Factory at Bangshal, said that he incurred a loss worth Tk 1 core in the past two years due to the pandemic.

He said that two Eid festivals were the peak time for their business but they had lost the business due to the ‘lockdown’.

‘We had just started selling shoes and sandals to retailers for the Eid sales but the shutdown imposed by the government on April 5 shattered our dreams. We do not know whether markets and shops will be reopened timely for Eid sales,’ said Mahabub, also the general secretary of Bangladesh Chamra-O-Rexin Jatio Paduka Prastutkarak Samity.

He said that exporters were producing and sending their products to buyers but the manufacturers who produce for the domestic market had no way to survive as the local sales remained suspended.

He claimed that more than 300 small shoe factories in Lalbagh area in the city disappeared from business in 2020 due to the coronavirus pandemic.