A lost war, a profitable war 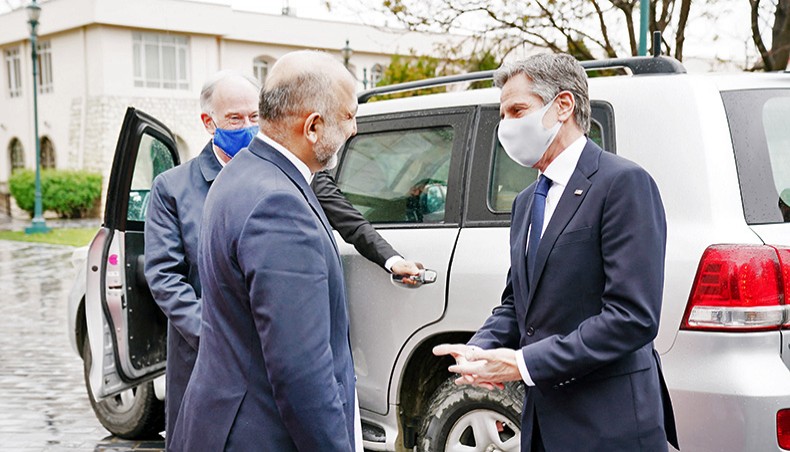 AFGHAN-CHESSBOARD is difficult. Now, with the US president’s latest Afghan-move, the chessboard is going to be more difficult, and more complex. It’s now neither a Stunning Queen Sacrifice nor a Bishop Endgame. Is it a Desperado Sacrifice or a Rook and Pawn Endgame? It’s difficult to ascertain now.

US president Joe Biden has officially announced that US troops will leave Afghanistan by September. The Empire’s military-cohorts NATO have followed their boss.

‘We cannot continue the cycle of extending or expanding our military presence in Afghanistan’, said Mr Biden on April 14, 2021.

Mr Biden, as he said, is ‘now the fourth US president’, two Republicans and two Democrats, ‘to preside over’ the Empire’s ‘troop presence in’ the country connecting the central and south Asias, and the Gulf country Iran.

Mr Biden declined to ‘pass this’ burden — the Empire’s troop withdrawal — ‘to a fifth’ US president.

The US president expressed a realisation: It’s time to end US’ longest war — a 20-years-long occupation of a country. It’s time to bring Empire’s troops home.

Mr Biden claimed: The objective of the war — to root out Al-Qaeda and prevent further terrorist attacks against the US — was accomplished by 2011.

He, however, acknowledged that US objectives in Afghanistan had become ‘increasingly unclear’ over the past decade.

The hard fact the US president said: Today, there were US troops there who weren’t even born in 2001. It’s a ‘multi-generational undertaking’.

Therefore, here’s an attempt to, as Mr Biden said, ‘end the forever war.’

No doubt, it was a war seemingly ‘forever’ — the war that has tarnished the Empire’s image as ‘ever victorious’, ‘always invincible’; although history tells that the imperialist power had to concede defeat a number of times in many of its war ventures in many countries, and had to confirm Mao’s famous assertion: Imperialism is a paper tiger.

The difficulties following the withdrawal decision are many-fold, as is the move’s complexities. These are within the Empire, and in the theater of action — Afghanistan, with factions and interests in home, and allies around the TA.

What shall happen to the Afghan security forces — an around 300,000-armed personnel? Once the Empire fully funded the ineffective force riddled with corruption and desertion. How long shall it be funded? The funding will be by the US taxpayers’ money while corruption will line pockets of a few.

Mr Biden said: US ‘troops shouldn't be used as a bargaining chip between warring parties in other countries.’

There’re the Afghan people paying the most: ‘And according to the United Nations Assistance Mission in Afghanistan (Unama), nearly 111,000 civilians have been killed or injured since it began systematically recording civilian casualties in 2009.’ (BBC News, April 15, 2021) Is there any logic and rationality behind this loss of lives? The ‘logic and rationality’ is imperialism, imperialist geo-strategy — a strategy driven by thirst for loot.

The statement is partly correct. No people in any country tangled in the war have won. The lone winner is the war industry — the armament and accessories producers and marketers, the war-contractors — so-called defense contractors, the plunderers that include a few politicians in a number of countries and their agents, official and unofficial.

After so many lives lost, destruction, barbarity, massacre of the Afghan people, what the Empire’s invasion has achieved? Anyone will ask: It took so many years and so much blood of the Afghan people to come to the realisation that the objectives of the invasion and occupation turned unclear. So much analysis, so much brilliance. For whose benefit such a losing war was initiated? Shall they be held accountable? No accountability for people’s lives is part of imperialist system.

More than a year ago, The New York Times ran a report, ‘What did the US get for

$2 trillion in Afghanistan?’ (December 9, 2019). It raised a vital question after mentioning the cost of nearly 18 years of war in Afghanistan, more than $2 trillion: ‘Was the money well spent?’

The report drew data and information from Neta C Crawford, professor of political science at Boston University; Costs of War Project at Brown University; US Special Inspector General for Afghanistan Reconstruction; US Department of Defense; The Long War Journal; UN Office on Drugs and Crime; Brookings Institution. It noted war costs included money specifically earmarked for war spending in addition to increases to the overall DoD base budget; and estimates were for authorised budget amounts in 2019 dollars.

After mentioning the death of more than 2,400 American soldiers and more than 38,000 Afghan civilians in the war [actual and final figures will be higher today], and telling that ‘democratic institutions’, which have been built, are shaky, the NYT report said:

‘Most of the money detailed in’ the DoD’s ‘declassified breakdowns of some of the three most recent years of spending’ — ‘about 60 per cent each year — went to things like training, fuel, armored vehicles and facilities. Transportation, such as air and sea lifts, took up about 8 per cent, or $3 billion to $4 billion a year’; ‘$10 billion on counter narcotics’; but the SIG’s previous year’s report ‘described counter narcotics efforts as a ‘failure’; and ‘[d]espite billions of dollars to fight opium poppy cultivation, Afghanistan is the source of 80 per cent of global illicit opium production’;

‘[t]oday, opium cultivation is a major source of income and jobs, as well as revenue for the Taliban. Other than war expenditures, it is Afghanistan’s biggest economic activity’; and

On the Afghan forces, the NYT report said:

‘One of the major goals of the American effort has been to train thousands of Afghan troops. Most of American spending on reconstruction has gone to a fund that supports the Afghan Army and police forces through equipment, training and funding.

‘But nobody in Afghanistan — not the American military, and not president Ashraf Ghani’s top advisers — thinks Afghan military forces could support themselves.’

Due to desertion, ‘they have to train new recruits totaling at least a third of their entire force every year.’

The report said despite $24 billion spent for ‘economic development’, ‘most Afghans still live in poverty.’

A fact, seemingly ridiculous, was told by the report:

‘War-related spending has roughly doubled the size of Afghanistan’s economy since 2007. But it has not translated into a healthy economy.

‘A quarter or more of Afghans are unemployed, and the economic gains have trailed off since 2015, when the international military presence began to draw down.’

It mentioned extent of corruption in the country: ‘[A]mong the worst in the world’.

There was an alluring ‘thing’ in the invaded country, minerals. The minerals-fact is well known for long. The NYT report said:

‘[T]he mineral sector, which the Pentagon boasted could be worth $1 trillion, have been dashed.’

‘$30 billion’, according to the report, was spent ‘on other reconstruction programmes’.

It said: ‘American taxpayers have supported reconstruction efforts […]’, and ‘[m]uch of that money […] was wasted on programmes that were poorly conceived or riddled with corruption.’

‘American dollars went to build hospitals that treated no patients, to schools that taught no students (and sometimes never existed at all) and to military bases the Afghans found useless and later shuttered.’ [What the ‘aid’-bosses say when they ‘aid’ poor countries? Don’t they repeatedly sermon the poor ‘aid’-receivers: ‘effective’ projects, ‘no-corruption’, ‘no-abuse’ of funds, etc.?]

There was fraud, etc. The NYT said:

‘Afghan maternal mortality remains among the highest in the world, while life expectancy is among the lowest. Most girls still receive little or no schooling and education for boys are generally poor.’ [Now, a part of their media is ‘concerned’ with ‘women education’ and ‘women rights’.]

The report cited the most ‘interesting’ part:

‘[t]he war has been funded with borrowed money.’

A war waged with borrowed money! The story goes like this:

‘To finance war spending, the US borrowed heavily and will pay more than $600 billion in interest on those loans through 2023. The rest of the debt will take years to repay.’

With this biggest amount among the amounts the report cited, a biting, but necessary question: who gained from what? Who paid for what? The creditors? The taxpayers? Ultimately, it’s the war industry that sold the war, and the creditors that financed the war.

The report didn’t fail to tell about a future:

‘[D]ebt and medical costs will continue long into the future.

‘Medical and disability costs will continue for decades.

‘More than $350 billion has already gone to medical and disability care for veterans of the wars in Iraq [this was also an imperialist war] and Afghanistan combined. Experts say that more than half of that spending belongs to the Afghanistan effort.’

The NYT report cautioned: ‘The final total is unknown, but experts project another trillion dollars in costs over the next 40 years as wounded and disabled veterans age and need more services.’

It’s the suffering of and payment by the US people. [There was also payment by peoples of other countries including Pakistan.] For whom is the suffering? For whom is the payment? For a few war profiteers; by a multitude; and among the multitude there are the toiling masses, toiling single mothers, toiling homeless. A barbaric profit-equation, it is. A confirmation of imperialism’s character.

Have the Afghan people gained anything? Nothing, but deaths, destructions, divisions, uncertainty and a scary future. Incidents of brutal murders and indignities in Afghan villages are fresh in memory of the Afghan people, no doubt. These are the ‘gains’ a people occupied by an empire gain.

The Empire once claimed that it would unify the Afghans. However, that was an illusion. Mr Biden has admitted: ‘It’s never been done.’

Shall all be concluded after the troop withdrawal? Shall there be peace in that land?

Not even a millimeter’s scope of peace in that land in near future with the present array of powers.

Even, the Empire shall not have the opportunity to get out of controversy cropping out from this war. Factions of the ruling classes in the Empire are argufying on the issue: Withdrawal. Within a few of its institutions, the situation is not without wrangle.

The withdrawal-declaration is actually a confirmation of the Empire’s defeat in the war. A shameful failure it is — a failure in its plan, strategy, tactics, power and audacity; a failure of its military minds and political leadership, a failure of its media. The Empire has failed to impose its terms on a people. It’s not that powerful as it propagates. Its power has limits.

Imperialism has limits and weak joints, which the system and the system’s theoreticians can’t rectify. The weak joints appear from its economic interests, and get manifested in political moves appearing checkmate and in standstills, scraps between factions, and within political arrangement and within ruling machine. The Empire’s Afghan War was not beyond this reality of imperialism’s limit; and is a manifestation of the crisis of imperialism.