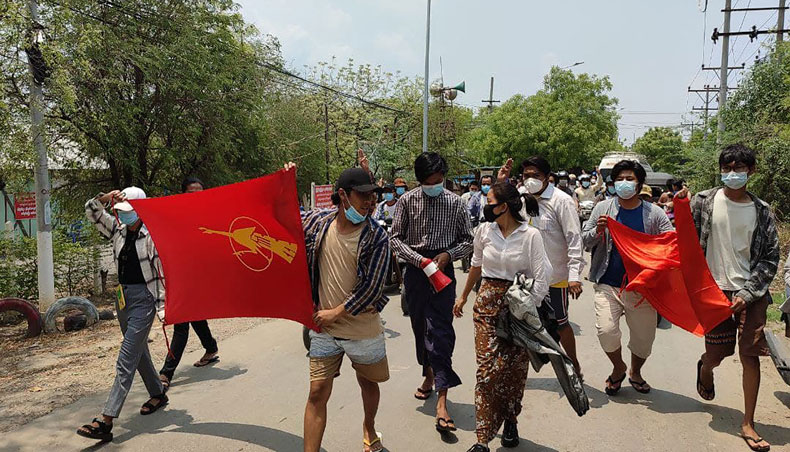 This photo taken and received on April 19, 2021 courtesy of an anonymous source via Facebook shows student protesters marching during a demonstration against the military coup in Mandalay. — AFP photo

The EU on Monday imposed sanctions on 10 Myanmar junta officials and two conglomerates linked to the military over the coup and bloody crackdown on protesters, European officials said.

The military has ramped up its attempts to crush dissent following mass demonstrations against its ousting of civilian leader Aung San Suu Kyi, with at least 737 civilians killed and the press increasingly under attack.

International pressure has been steadily building on the junta, with western powers seeking to target their key moneymakers.

‘The military regime is continuing its course of violence and manoeuvring the country into a dead end. That is why we are increasing the pressure to bring the military to the negotiating table,’ German foreign minister Heiko Maas said after virtual talks with his EU counterparts.

‘In addition to the listing of individuals, two economic conglomerates that are attributed to the military are also affected,’ he added.

The two firms hit with asset freezes and visa bans were the Myanmar Economic Corporation and Myanmar Economic Holdings Ltd which dominate sectors including trading, alcohol, cigarettes and consumer goods.

The officials targeted are mostly members of the ruling State Administration Council seen as responsible for undermining the democracy in the southeast Asian nation, diplomats said.

The announcement came after Japan urged Myanmar authorities on Monday to release from prison a Japanese journalist accused of spreading fake news, one of at least 65 reporters arrested during the junta’s crackdown.

Yuki Kitazumi was detained on Sunday, and a Japanese embassy spokesman confirmed that he was transferred overnight from a police watchhouse to the Insein prison.

Japanese diplomats had sought permission to visit him in jail but that request had not yet been granted, an embassy spokesman said on Monday.

‘We are informed by the police he was arrested due to the suspicion of releasing fake news,’ he said.

Myanmar authorities told the embassy the journalist was not physically harmed during the arrest and was in good health.

‘We are asking Myanmar for the person’s early release. We will do our utmost to protect the Japanese national,’ Japanese government spokesman Katsunobu Kato told reporters.

The press has been caught in the junta’s crackdown as the military attempts to tighten control over the flow of information, throttling internet access and revoking the licenses of five local media outlets.

At least 34 journalists and photographers remain in custody across Myanmar, according to monitoring group Reporting ASEAN.

International condemnation of the violent crackdown has so far seemingly been ignored by the junta.

The US and Britain have already imposed sanctions on the MEC and MEHL, and Washington has hit Myanmar’s state gem company as well.

But fighting continued on Monday between residents and the military in the central city of Myingyan, where at least four people were shot on Monday afternoon, a resident said.

It was unclear how many people died.

‘There is still some shooting. It’s like guerrilla war in our town,’ the resident said, adding that people were trying to defend themselves with homemade guns.

The resident said the military set fire to some residents’ motorbikes.

At least six people including a 13-year-old have been arrested in Myingyan, local media reported.

Meanwhile, close to 40 Myanmar sailors in hotel quarantine in Yangon had security forces barge into their rooms on Saturday after some of them participated in the daily protest ritual of banging on pots and pans.

Traditionally a way for Myanmar people to drive away evil spirits, the activity has become an act of resistance since the putsch, with nightly drumming from 8:00pm local time.

The seafarers were staying at the Hlaine Tet Hotel after returning from South Korea.

Myo Min, who did not use his real name, said his group was beaten up and that some were robbed — one seafarer’s $1,500 salary was stolen.

Three were badly injured, he added.

‘As soon as the door was opened, they started beating us,’ he said, by phone.

‘None of them were wearing masks... It is totally unacceptable. I felt insecure now. I just want to go back home. No one can protect us.’