5 wounded in rocket attack targeting Iraq base hosting US 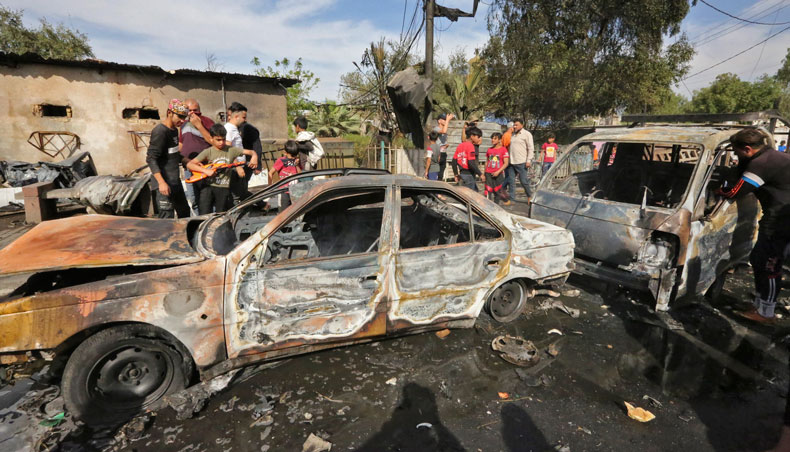 People gather around destroyed vehicles at the scene of an explosion in the Habibiya district of the Sadr City suburb of Iraq’s capital Baghdad on April 15, 2021. — AFP photo

Two of the rockets fired at Balad airbase, north of Baghdad, crashed into a dormitory and a canteen of US company Sallyport, a security source told AFP.

There was no immediate claim of responsibility, but the United States routinely blames Iran-linked Iraqi factions for such attacks on its troops and diplomats.

F-16 fighters are stationed at the Balad airbase, and several maintenance companies are present there, employing Iraqi and foreign staff.

There have been around 20 bomb or rocket attacks against American interests, including bases hosting US soldiers, since US president Joe Biden took office in January.

Dozens of others took place from the autumn of 2019 under the administration of Donald Trump.

Two Americans and an Iraqi civilian have been killed in such attacks since late 2019.

An Iraqi civilian working for a firm maintaining US fighter jets for the Iraq air force was also wounded in one attack.

The Balad base was also targeted earlier this month, without causing any casualties.

The attacks are sometimes claimed by shadowy Shiite armed groups aligned with Iran who are demanding the Biden administration set a pull-out date for Iraq as it has for Afghanistan.

On Wednesday, an explosives-packed drone slammed into Iraq’s Arbil airport in the first reported use of such a weapon against a base used by US-led coalition troops in the country, officials said.

There were no casualties in the strike on the capital of northern Iraq’s autonomous Kurdish region, although it did cause damage to a building in the military part of the airport.

In February, more than a dozen rockets targeted the military complex inside the same airport, killing an Iraqi civilian and a foreign contractor working with US-led troops.

Pro-Iran groups have been ratcheting up their rhetoric, vowing to ramp up attacks to force out the ‘occupying’ US forces, and there have been almost daily attacks on coalition supply convoys across the mainly Shiite south.

The United States last week committed to withdraw all remaining combat forces from Iraq, although the two countries did not set a timeline for what would be a second US withdrawal since the 2003 invasion which toppled Saddam Hussein.

The announcement came as the Biden administration resumed a ‘strategic dialogue’ with the government of prime minister Mustafa al-Kadhemi, who is seen as too close to Washington by pro-Iranian groups.

Biden last week announced a full US pull-out from Afghanistan by the 20th anniversary of the September 11, 2001 attacks that also led to the US-led invasion of Saddam Hussein’s Iraq three years later.

Sworn foes Tehran and Washington have both since had a presence in Iraq, where 2,500 US troops are still deployed and Iran sponsors the Hashed al-Shaabi, a state-integrated paramilitary coalition.

Tensions have spiked to the edge of war, in particular after Trump ordered a drone strike near Baghdad airport in January 2020 that killed top Iranian military commander Qasem Soleimani.