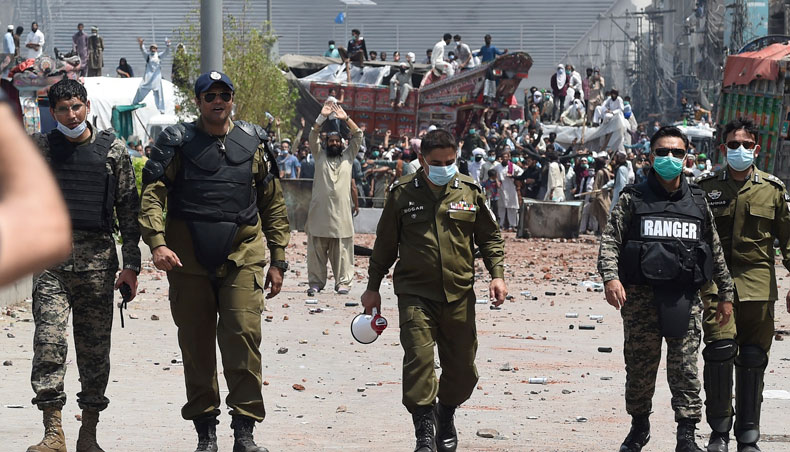 Security personnel walk back after having a talk with the supporters of Tehreek-e-Labbaik Pakistan party during a protest along a blocked street after their party’s leader was detained following his calls for the expulsion of the French ambassador, in Lahore on April 18, 2021. — AFP photo

Eleven Pakistani police officers seized by supporters of a radical Islamist group as part of their campaign to get the French ambassador expelled have been released, officials said on Monday.

The officers were grabbed as hostages on Sunday by supporters of the Tehreek-e-Labbaik Pakistan during protests in Lahore.

Video circulating on social media — and confirmed unofficially by police as genuine — showed some of them bloodied and bruised, with bandages around their heads.

Interior minister Sheikh Rashid Ahmed said that the police had been released early Monday after ‘negotiations’ with the TLP, which the government banned last week after effectively labelling it a terrorist organisation.

The officers had been held at a TLP mosque stronghold in Lahore, which is now packed with supporters and surrounded by police.

‘Negotiations have been started with TLP; the first round completed successfully,’ said Rashid in a video on Twitter, adding, ‘They have released 11 policemen who were made hostages.’

He said a second round of negotiations would take place later Monday, although it is not clear what they will discuss.

Previously the TLP had set an April 20 deadline for the expulsion of the French ambassador.

The group has been behind an anti-France campaign for months since president Emmanuel Macron defended the right of Charlie Hebdo magazine to republish cartoons depicting the Prophet Muhammad – an act deemed blasphemous by many Muslims.

Last week the embassy in Pakistan advised its nationals to leave the country – a call that appears to have gone largely unheeded.

‘The TLP people have gone inside the mosque and the police have also stepped back,’ said Rashid, adding, ‘Hopefully, the rest of the issues will be settled in the second round.’

Rioting has rocked the country for the past week since the leader of the TLP was detained in Lahore after calling for a march on the capital.

The protests have paralysed cities and led to the deaths of six policemen.

TLP leaders say several of the party’s supporters were killed in Sunday’s clashes.

‘We won’t bury them until the French ambassador is kicked out,’ Allama Muhammad Shafiq Amini, a TLP leader in the city, said in a video statement.

Prime minister Imran Khan’s government has struggled to bring TLP to heel over the years, but this week announced an outright ban against the group – effectively labelling it a terrorist outfit.

Still, on Saturday he suggested the party hadn’t been banned for its ideology, but rather its methods.

‘Let me make clear to people here & abroad: Our govt only took action against TLP under our anti-terrorist law when they challenged the writ of the state and used street violence & attacking the public & law enforcers,’ he tweeted.