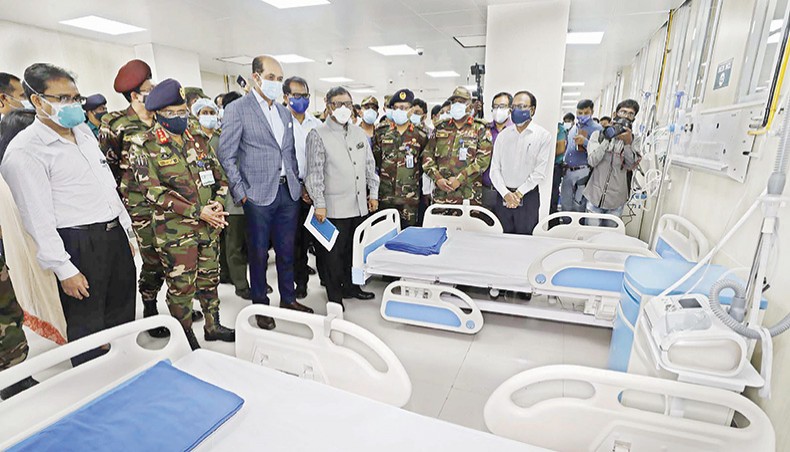 Health minister Zahid Maleque, among others, visits the specialised Covid hospital set up at a building of Dhaka North City Corporation at Mohakhali after inauguration on Sunday. — New Age photo

The government on Sunday inaugurated a 1,000-bed Covid hospital at Mohakhali in Dhaka.

Health minister Zahid Maleque while addressing the inaugural session said that the hospital with central oxygen supply facilities would be turned into a 1,000-bed dedicated Covid hospital by the end of this month.

The hospital now has 500 beds, including 112 beds in the intensive care unit.

The government turned the DNCC Covid isolation centre, which had been inaugurated at the beginning of the outbreak in 2020, into the DNCC Dedicated Covid-19 Hospital.

The minister claimed that Bangladesh was managing Covid crisis better than many other countries of the world.

Many countries are to set up tents for coronavirus patients while Bangladesh is providing treatment to patients in hospitals, he said.

‘We could control Covid-19 at the initial stage but it has spread for indifferent public movements violating health guidelines,’ he said.

He said that the government closed two isolation centres — one at the DNCC market and the other at the Bashundhara Convention Centre — in Dhaka as the government was not getting patients for isolation.

He said that the government, in the meantime, had supplied central oxygen facilities to 12,000 beds in 100 hospitals.

Dhaka north city mayor Atiqul Islam said that there had been no hospital for 1.5 crore residents of the DNCC.

The hospital has been readied only in 17 days of frantic efforts of sincere officials, he said.

He said that they constructed the building to allocate 360 shops as a part of relocating Karwanbazar and 258 shops had already been allocated.

‘We will cancel the allocations,’ he said.

The hospital’s director Brig Gen AKM Nasir Uddin said that they were ready to take patients for treatment and would gradually complete the facilities, including laboratory and others.