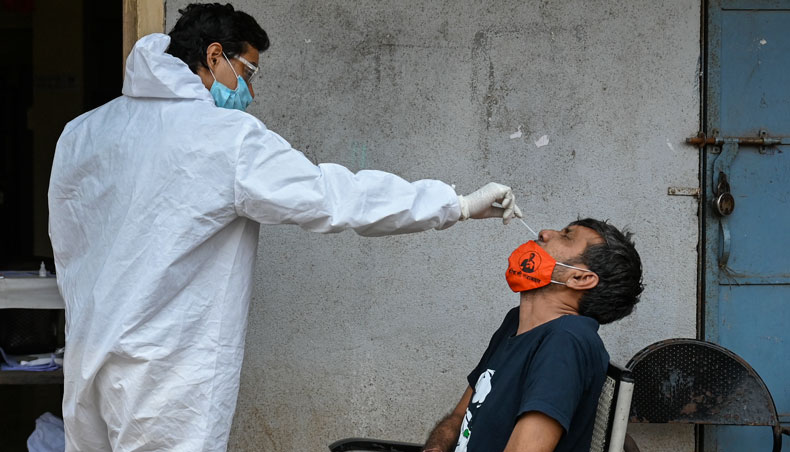 A health worker takes a nasal swab sample of a resident for a COVID-19 test at a medical centre in Dharavi slums in Mumbai on April 17, 2021. — AFP photo

This is the first time when the single-day spike crossed the 260,000-mark in India.

There are still 1,801,316 active cases in the country, with an increase of 121,576 through Saturday, while 12,809,643 people have been cured and discharged from hospitals across the country.

The daily figures continue to peak in the country every day, and the government has imposed new measures to contain the spread. Some school exams were cancelled, and others have been postponed in the wake of the deteriorating situation.

India kicked off a nationwide vaccination drive in January, and so far over 122 million people have been vaccinated across the country.

Meanwhile, the government has ramped up testing facilities, as over 266 million tests have been conducted.

A total of 266,538,416 tests have been conducted till Saturday, out of which 1,566,394 tests were conducted on Saturday alone, said the latest data issued by the Indian Council of Medical Research on Sunday.

The national capital Delhi, one of the most affected places in the country, witnessed 24,375 new cases and 167 deaths through Saturday.

So far 11,960 people have died in the city, confirmed Delhi’s health department.

As a precautionary measure, Delhi has been witnessing a weekend curfew from Friday night to Monday morning.