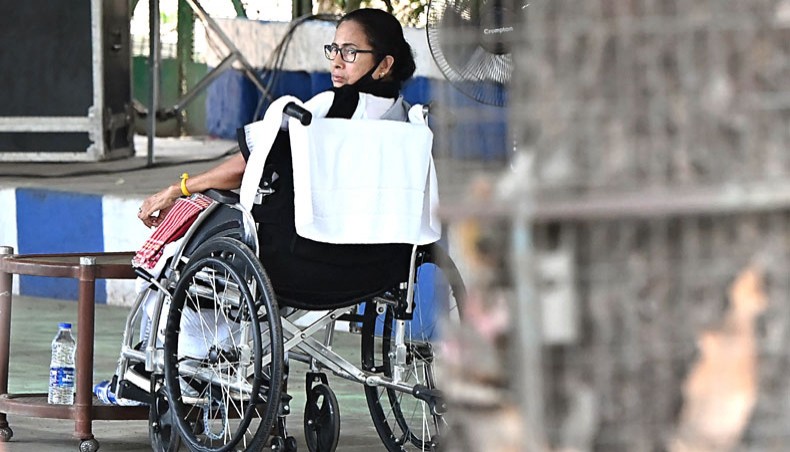 West Bengal’s chief minister and the leader of Trinamool Congress party Mamata Banerjee takes part in a protest against a 24-hour campaign ban on her in the ongoing state legislative assembly elections imposed by the Election Commission in Kolkata on April 13. — Agence France-Presse/Dibyangshu Sarkar

TWO events happened on April 12. The Election Commission of India took the drastic step of imposing a 24-hour ban on campaigning in the general elections to the assembly of West Bengal on the state’s chief minister, Mamata Banerjee. Her crime was that she had made ‘highly insinuating and provocative remarks’ regarding the commission and the central forces.

The commission’s indictment had another grave charge — namely, her appeal to minority voters not to divide their votes. In the parlance of Indian media and officialdom, ‘minority’ is a euphemism for Muslims of course. They are the minority.

All this, the election commission said, was a violation of the Model Code of Conduct. This loosely worded document has no statutory support. In the last 20 years, the commission has tried to enforce it through the abuse of its statutory power to postpone polls in defined circumstances.

This is a grave lacuna in the constitution itself. Successive governments have exploited it to fill the office with pliant persons. West Bengal’s chief minister has in her MP Derek O’Brien, an eloquent spokesman. He said that the initials for the election commission — EC — stand for ‘extremely compromised’.

He is right. There is a battle royal for the control of the government of West Bengal. It is prime minister Narendra Modi’s proclaimed goal to have a Congress-free India. In this, he has failed most notably in Maharashtra whose capital Mumbai is also India’s financial capital, and in Rajasthan, Punjab and Kerala, the home of the communist movement. Modi and his hatchet man Union home minister Amit Shah descended on Bengal for fierce electioneering. The public has been treated in recent days to language the likes of which it never heard before. Violence also exacted its toll.

In no other general election since 1952 have political attacks plummeted so low in taste and content as in this. Invective is a recognised, even lauded, part of political discourse. It is as old as politics itself. The Greeks and the Romans elevated it to a fine art. British statesmen of former years, literate in Greek and Latin, drew on the rich heritage. The grammarians aptly called Cicero’s orations the Invectives.

Sample this passage in a speech in the Senate against Lucius Sergius Catilina: ‘In the whole of Italy there is not one single poisoner, gladiator, robber, assassin, parricide, will-forger, cheat, glutton, wastrel, adulterer, prostitute, corrupter of youth, or youth who has been corrupted, indeed any nasty individual of any kind whatever, who would not be obliged to admit he has been Catilina’s intimate.’

This speech was delivered over 2,000 years ago. It was, however, not abuse for its own sake even with the salacious details that brook no reproduction. It was a reflection of social and other evils which eventually brought down the republic Cicero had so devotedly served as consul for 63 years.

There is a clear distinction between the angry rhetoric of the hustings and the language of the gutter. Truth to tell while the language in election campaigns has declined, one misses the political invective that was once the hallmark of British public life.

In the 19th century, Benjamin Disraeli towered above his contemporaries in his mastery of invective. He ruined Robert Peel’s career with a single speech in the house on May 15, 1846: ‘He is a burglar of others’ intellect. Search the index of Beatson, from the days of the Conqueror to the termination of the last reign, there is no statesman who has committed political petty larceny on so great a scale.’

In the 20th century the palm must go to the Welsh Wizard, David Lloyd George. Not for him the written speech, save on a few occasions, or the practised reply.

His repartee was unfailingly devastating. When Joynson-Hicks — who had been an impecunious Mr Hicks until he married an heiress named Joynson and joined her name to his — made fun of Lloyd George’s phrase ‘unearned increment’, Lloyd George at once interrupted him to say, ‘I can think of no better example of unearned increment than the hyphen in the right honourable gentleman’s name.’

However, wit and invective are but the icing on the cake. Its content is civilised debate on issues of public policy. Sadly, there is not much of this; especially during an election campaign.

Dawn.com, April 17. AG Noorani is an author and a lawyer based in Mumbai.