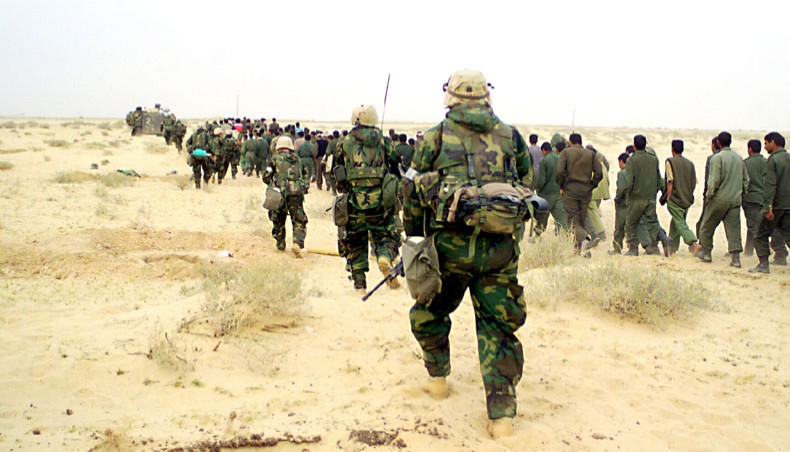 APRIL, 2003, was the cruellest month for the people of Iraq, a month of reflection on Pakistan by prime minister Atal Bihari Vajpayee, and a rare opportunity for Worldview India, a dedicated group of Indian journalists who helped to lift the mist from the historic events that month.

Americans had occupied Iraq, by April 3. Vice-president Dick Cheney, the real author of the operation, was eager to declare victory on April 9. It was to be a spectacular media event. After all, Cheyney had embedded 300 plus journalists with the forces.

The choreography was audacious. In a prepared statement Dick Cheyney would declare victory on global media. This statement would be interspersed with images of an ecstatic, popular upsurge pulling down the statue of Saddam Hussain at Firdous square. Cheyney’s talking head would alternate with the slow fall of the statue. Cheyney would never have dreamt that all the back channel tricks that had gone into the manufacture of the memorable spectacle would be exposed. For the first time in the history of Indian journalism, Worldview India had posted camera units-cum-reporters in Baghdad, Najaf, Istanbul, Jerusalem, Amman, Lebanon. Some of these reporters happened to be in Palestine hotel, witness to the real story – the one the world was not supposed to know.

Contrary to the narrative of a popular uprising toppling the statue, the Americans had to think on their feet: they had to improvise the iconic images because the popular upsurge had simply not materialised. US marines were mobilised to ‘lasso’ the neck of the statue and have it pulled down by cranes. CNN, premier cheerleader for the occupation, has to this day incorporated a video of the statue as a lasting symbol of Americans replacing a ‘brutal’ dictatorship with democracy.

As we know from the experience of various ‘colour revolutions’, camera angles can amplify a handful of people (in this case the workers of Palestine hotel) into a revolution on the march. True, the sole super power can arrange for a statue to be pulled down, but how does it show images of crowds celebrating Saddam Hussein’s fall?

The 1991-92 Shia uprising in Najaf and Karbala encouraged by operation Desert Storm was harshly put down by Saddam Hussain. The only images of the damaged shrine of Imam Hussain were brought to the world by a TV crew led by this reporter. The Shia refugees from this almost unreported conflict had been settled in a vast ghetto on the outskirts of Baghdad. It was named, like much else in Iraq those days, as Saddam City. It dawned on Cheyney’s team that one group of people thrilled at the ‘fall of Saddam were actually the inmates of the nearby ghetto, teeming with disgruntled Shias.

A deal was struck with the controversial cleric, Muqtada Sadr. Saddam city was renamed ‘Sadr’ city. That is when celebrations erupted on the streets of Baghdad. Crowds from Sadr city trampled on posters of Saddam Hussain and beat it with their Sandals. American romance with the Shias of Iraq burgeoned. On March 20, 2005, Thomas Friedman of the New York Times recommended Grand Ayatullah Ali Sistani for the Nobel Prize. Sistani remains the blue-eyed Ayatullah because he differs with Tehran on the clergy’s role in governing the state.

Cheyney’s contrivance of a quick victory in Iraq was matched by the energetic diplomacy of the US embassy in New Delhi. They persuaded South Block to participate in the American victory by taking over the administration of Iraq’s Kurdish North. Powerful cabinet minister like Jaswant Singh found the American blandishment tempting. Prime minster Vajpayee, as much a statesman as a skilful politician, rather than rubbishing his cabinet colleagues, went into one of his extended spells of deep reflection.

He called up his friend AB Bardhan, secretary general of the CPI. ‘Are you supporting Indian occupation of Kurdish Iraq?’ Vajpayee taunted. ‘Not at all’ exclaimed Bardhan. ‘But I see no protest’. Vajpayee continued. The prime minister was looking for signs of street restiveness on the issue to cite in opposing the idea. The source for this exchange was Bardhan. Vajpayee did not deny it.

This was a period of extraordinary tension between India and Pakistan. After the December 13, 2001 attack on Indian parliament, the two militaries were in an eyeball to eyeball confrontation. On April 18, Vajpayee landed in Srinagar and, without a hint to his cabinet colleagues, held out his hand of peace to Pakistan. ‘An awesome power has arisen’. Regional quarrels have no meaning now. Conflicts in the region would have to be composed. The January 4, 2004 Indo-Pak summit in Islamabad followed.

Vajpayee found the ‘sole super power’ moment forbidding. Hence, his quest for regional peace. Narendra Modi’s crawl towards a regional entente is dictated by a different set of circumstance. The burgeoning China, Russia, Iran, Pakistan togetherness in the vicinity makes a friendly US look too distant.

Journalists of Worldview India remember April of 2003 for the kind of journalism Indian journalists have never practised before or since. The idea was to cover the war and the occupation of Iraq from an Indian perspective. The western media would of course cover the occupation comprehensively, but from its own perspective. Indeed, the embedded journalists would be part of the war effort. This would not be the Indian perspective, unless New Delhi accepted the proposition that it was India’s war too. Indian media houses are stone deaf on such issues. For coverage of foreign affairs they have deals with Reuters, BBC, CNN, FOX News and so on – so much for atmanirbharta or self-sufficiency. A word of gratitude is owed to SY Qureshi, director general of Doordarshan, for having grasped the significance of the project. He fought the resistance in the system. The standard argument against covering foreign affairs was familiar. ‘Foreign affairs have low TRP ratings’.

Let Qureshi bear witness. Amitabh Bachchan’s Kaun Banega Crorepati (who will be the millionaire) had the highest ratings until Worldview India’s one hour prime time reporting from the gulf by dedicated reporters pipped it to the post.