US pulls back on charge Switzerland, Vietnam manipulate currency 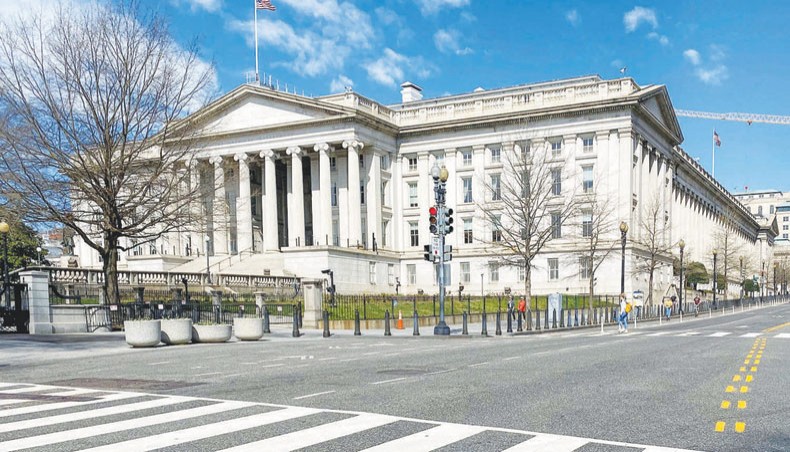 A file photo shows the US Treasury Department building. The US Treasury rolled back a Trump-era accusation against Switzerland and Vietnam of manipulating their exchange rates to gain a competitive trade advantage, saying on April 16, 2021 there was ‘insufficient evidence’ for the charge. — AFP photo

The US Treasury rolled back a Trump-era accusation that Switzerland and Vietnam were manipulating their exchange rates to gain a competitive trade advantage, saying on Friday there was ‘insufficient evidence’ for the charge.

While Treasury withdrew the manipulator label, the two countries continue to meet the criteria for scrutiny of their currency policies, and were joined by Taiwan, according to the semi-annual report to Congress.

China also remains on Treasury’s ‘Monitoring List’, after being removed from the ranks of currency manipulators in January 2020, just before then-president Donald Trump signed an initial trade pact with Beijing.

Beijing has long been a target of scrutiny under the report, and Washington has frequently accused the government of keeping the exchange rate artificially low, using its massive stockpile of US dollars.

In the latest report, ‘Treasury urged China to improve transparency regarding its foreign exchange intervention activities’ and policies.

The watch list also includes Japan, Korea, Germany, Italy, India, Malaysia, Singapore and Thailand, as well as Ireland and Mexico, which were added to the December list.

‘Treasury is working tirelessly to address efforts by foreign economies to artificially manipulate their currency values that put American workers at an unfair disadvantage,’ Treasury Secretary Janet Yellen said in a statement.

Congress requires the twice-yearly analysis to single out countries that might be actively trying to keep their currencies weaker against the US dollar, which would make their exports cheaper while making American goods more expensive.

However, the findings in the report are largely symbolic and do not entail sanctions.

A Treasury official told reporters that the COVID-19 pandemic made analysis for 2020 difficult given it caused massive disruptions in global trade and obliged governments to roll out spending programs to ease the damage.

In the report, Treasury reviews 20 major trading partners with bilateral goods trade with the United States of at least $40 billion annually. Those countries account for about 80 per cent of US goods trade, the official said.

The criteria are a large trade surplus with the United States, a significant current account surplus and evidence of ‘persistent, onesided intervention’ in foreign exchange markets.

A Treasury official told reporters that Switzerland, Taiwan and Vietnam exceeded the thresholds by sizeable margins.

Congress requires Treasury to engage in ‘enhanced consultations’ with those countries, which ‘includes urging the development of a plan with specific actions to address the underlying causes of currency undervaluation and external imbalances,’ the report said.

The Swiss National Bank (SNB) protested the December designation as a manipulator, and in a statement on Friday again denied any inappropriate activity.

‘Switzerland does not engage in any form of currency manipulation,’ the SNB said in a statement.

The Swiss franc has long been considered a safe haven currency, meaning investors scurry to buy it in times of crisis, pushing up its value and causing the SNB to intervene.

The IMF noted last week that the franc had appreciated by 6 per cent despite SNB efforts to counter the influx of funds seeking a safe investment.