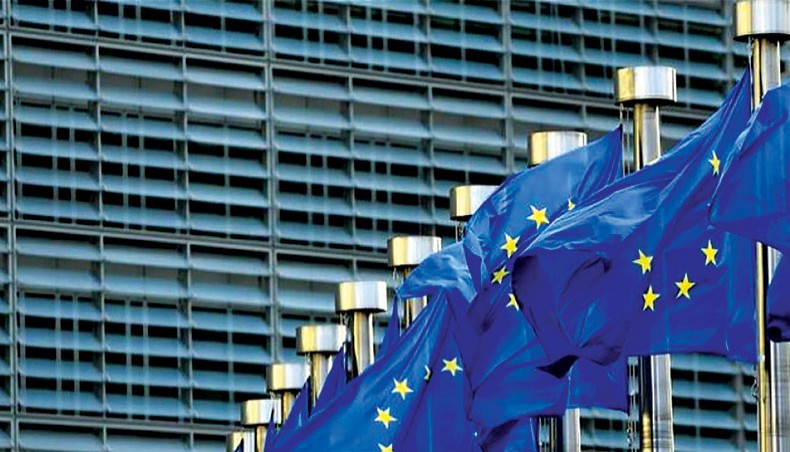 European Union flags are seen in front of the European Commission building in Brussels. The European Commission will next week present the first part of a ‘green taxonomy’ list of energy sources and technology to be labelled as sustainable investments, but a question mark hangs over the inclusion of natural gas. — AFP photo

The European Commission will next week present the first part of a ‘green taxonomy’ list of energy sources and technology to be labelled as sustainable investments, but a question mark hangs over the inclusion of natural gas.

The classification system, to be published on Wednesday, is mandated under a 2019 agreement between member states and the European Parliament meant to define durable economic activities and green finance.

It seeks to define what the EU would deem as sustainable as it moves towards a goal of Europe becoming carbon-neutral by 2050, with criteria focusing on mitigating climate change or preparing for it.

A second commission proposal is to follow later this year covering four other subjects — protection of water and marine resources, the circular economy, preventing pollution and biodiversity — all part of the EU’s ‘Green Deal’ to reach that ambition.

For an investment to be considered ‘green’ it has to meet one of these objectives without hurting any of the others.

The proposal is to become a ‘delegated act’, meaning it becomes law unless member states or the European Parliament reject it.

But a leak of the commission’s taxonomy list last month raised an outcry from NGOs, experts and MEPs, in particular over the inclusion of gas as a partially sustainable energy source.

Nine experts the commission consulted threatened to break off cooperation over the perceived ‘greenwashing’, according to a letter sent to the commission and seen by AFP. The commission plan, according to the leak, is to have gas-fuelled power stations labelled as ‘green’ as transitional facilities up to 2025 where they replace ones using coal.

One of the experts signing the letter, Sebastien Godinot, economist at the environmental protection NGO WWF, said that would give a ‘blank cheque’ to gas operators and risk a long-term dependence on fossil fuels.

‘This proposal could potentially create a direct incentive to build even more gas co-generation plants than already planned’, Godinot warned.

A Green MEP from the Netherlands, Bas Eickhout said: ‘A gas-fired power plant built now is there to stay for 40 years. So brings you way over the 2050 deadline.’

As a result, ‘we are going to object’ to the commission proposal, based on the version leaked in March, Eickhout said.

Several sources said that the governments of Austria, Denmark, Ireland, Luxembourg and Spain had written a joint letter to the commission to voice their objection to including gas in the taxonomy.

Other points of discord are the commission’s approach to forestries and logging, seen by some as not rigorous enough, and it automatically classifying bioenergy as durable even when the biomass it uses comes from dedicated farmland.

A French news web site, Contexte, said on Thursday that the commission had been forced to revise its document and could revert to an ordinary legislative process that would be much longer.

The commission did not confirm that. An EU source said that the text it was to present was ‘still in development’ and stressed how technical it was.