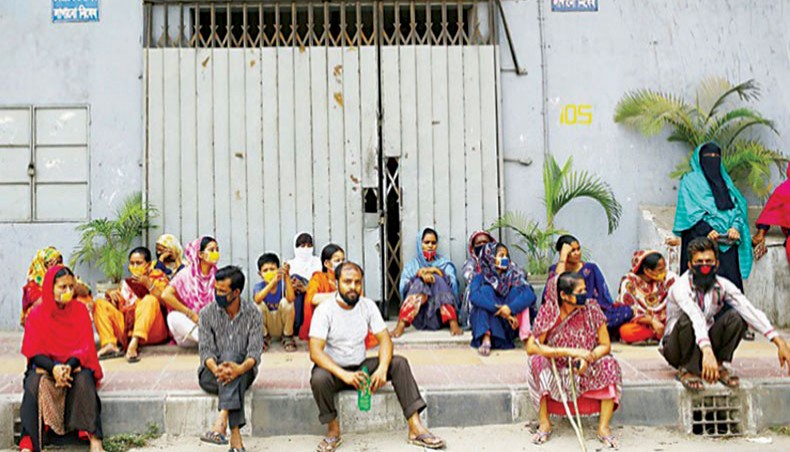 A file photo shows workers protesting against non-payment of wages in front of a readymade garment factory in the capital in April 2020. Wage earning workers have felt the brunt of COVID-19 outbreak in the country as their incomes have shrunk the most amid the crisis, according to a study conducted by the Centre for Policy Dialogue.— New Age photo

Wage earning workers have felt the brunt of COVID-19 outbreak in the country as their incomes have shrunk the most amid the crisis, according to a study conducted by the Centre for Policy Dialogue.

The COVID-19 outbreak began in Bangladesh in March 2020.

A fall in workers’ incomes caused generation of 1.64 crore new poor in the second quarter (April-June) of 2020 in the country, the report said.

The event ‘Recovery of the Labour Market during COVID-19: Role of Trade Union’ was jointly organised by the CPD and the Bangladesh Institute of Labour Studies.

The report said that urban-based day labourers mainly working in construction, informal services and transport workers were the most affected workers’ groups in the pandemic.

The urban informal sector lost jobs by about 1.08 million, which is over 8 per cent of total urban employment at the level of 2016-17, the CPD report found.

Citing World Bank data, Moazzem said that the overall wages of workers had declined by 37 per cent and the decline in income of wage earning workers was 49 per cent in 2020.

The study report said that trade unions across the world had been active in undertaking various initiatives in addressing issues and concerns related to workers amid the pandemic but the unions in Bangladesh were relatively less vocal than other South Asian countries.

‘Different tripartite discussions and negotiations that have been undertaken during this crisis period have ensured limited success in favour of workers and MSMEs regarding coping with the risks and rebounding and recovery from the crisis,’ the report said.

Against this backdrop, trade unions should strengthen their tripartite discussions and negotiations with employers and the government with regard to retaining the jobs and ensuring workers’ wages, the CPD said.

According to the report, out of the stimulus packages worth Tk 1,26,853 crore, only Tk 44,973 crore or 35.4 per cent was allocated for workers, entrepreneurs of SMEs, low-income farmers and small traders, targeted marginal people and unemployed and poor workers but 44 per cent of the allocation was not disbursed.

Moazzem suggested that the trade unions in Bangladesh should revisit their activities and engagements during the pandemic period and take lessons from other countries with a view to identifying the areas of future engagement during the process of sustainable recovery.

Amirul Haque Amin, president of the National Garment Workers Federation, claimed that the workers representatives were getting less priority than the factory owners in any tripartite meeting.

‘We do believe in social dialogue to shorten the gaps between the factory owners and workers but all the parties in the dialogue should be treated equally,’ he said.

Amin demanded paying the festival allowances to workers 10 days before the forthcoming Eid-ul-Fitr and not to cut wages showing the fresh wave of coronavirus as an excuse.

Mantu Ghosh, president of the Garment Workers Trade Union Center, demanded arranging transport for the workers by the factory owners during the fresh restrictions in April 14-21.

He said that many workers were forced to walk few kilometres to reach their factories and they were facing threat for retrench from jobs due to making late for a few minutes to join work.

Mantu Ghosh demanded that factory owners should arrange transport for the workers in Dhaka, Gazipur, Narayanganj and Chattogram zones immediately.

He said that the government should take initiatives to compel factory owners to take the responsibility of their workers.

Workers Safety Forum convener Hameeda Hossain said that a large number of workers were walking to and from their factories amid the restrictions due to lack of transport.

She said that trade unions would have to identify the problems of workers and to inform authorities to resolve the issues.

Hameeda urged the health department to take an initiative to bring factory workers under vaccination programme within the short time.

Labour secretary KM Abdus Salam said that all stakeholders were getting equal importance in tripartite dialogues.

He said that the monitoring of crisis management committee was going on in the factories to ensure health safety of workers amid the pandemic.

Tuomo Poutiainen, country director of the International Labour Organisation, said that the government should focus on providing social safety net to labours in both formal and informal sectors.

He said that it was the responsibility of the government to organise participatory social dialogues.