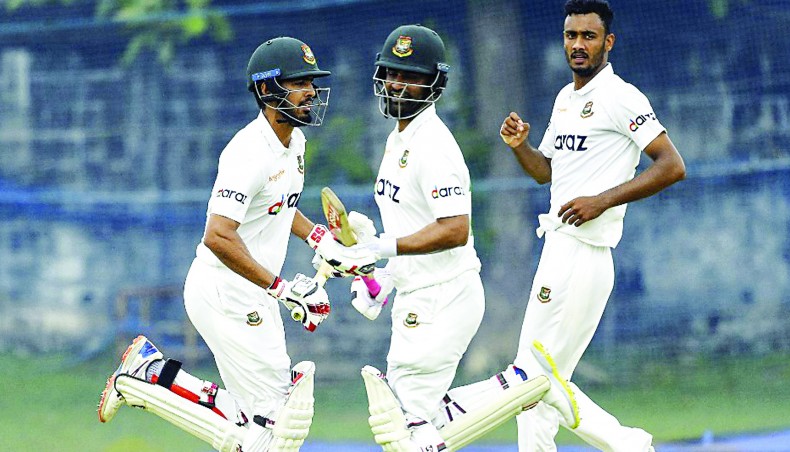 Bangladesh bowlers lacked penetration on the first day of the two-day intra-squad practice game as they managed to get only one wicket after bowling for 79.2 overs at the MCG Katunayeke Ground on Saturday.

The Tamim Iqbal-led Bangladesh Red ended the day on 314-6, but five of those wickets came after the batsmen left the field ‘retired hurt’ to give their teammates an opportunity to bat.

Shuvagata Hom, who returned to the Test side after an over four-year gap, took the day’s only wicket that fell to a bowler when he dismissed Taijul Islam for 12.

Despite a barren day for the bowlers, where their lack of ability to take wickets in flat pitches was on display, chief selector Minhajul Abedin heaped praises on the players and expressed his satisfaction with the preparation ahead of the two-Test series, which will begin on April 21.

‘After training for two days, our players are getting to play this practice match. This is highly beneficial for them, especially in terms of getting accustomed to the weather and the condition,’ said Minhajul, who is with the team in Sri Lanka.

‘I think the players now are quite used to the condition and the wicket. They got decent practice in the game. Our top order batted well, the bowlers also maintained a good line and length and also bowled in good areas,’ he added.

Nazmul, who is likely to get another chance at number three in the forthcoming Tests despite his failure at the position against the West Indies, was happy with his batting approach and hoped to continue it in the actual series.

‘I feel that it was a very good practice right before the start of the Test matches. I batted the way I wanted to bat. Hopefully, if I continue batting in this shape I will do well in the Test matches,’ Nazmul said in a video message.

The selectors have taken a 21-member preliminary squad to Sri Lanka and had previously said that they will announce the main squad after the practice match.

Dismal performance from the young pacers and a couple of Test team regulars put question marks over Bangladesh’s attacks fate against the Sri Lankan side, but Minhajul remained hopeful that the bowlers would learn from their mistakes and rectify them on the second day.

‘The bowlers had an extremely tough session in the practice game. There is a decent bounce in the pitch and the pitch is almost a flat track. The condition most probably will be quite similar in the Tests. It’s important to bowl in good areas and maintain focus while bowling in such heat.

‘We have another day to go in the practice match for them to get used to the condition. I believe that the bowlers will adjust quickly to the condition and it will come in handy in our build-up to the Test matches.’