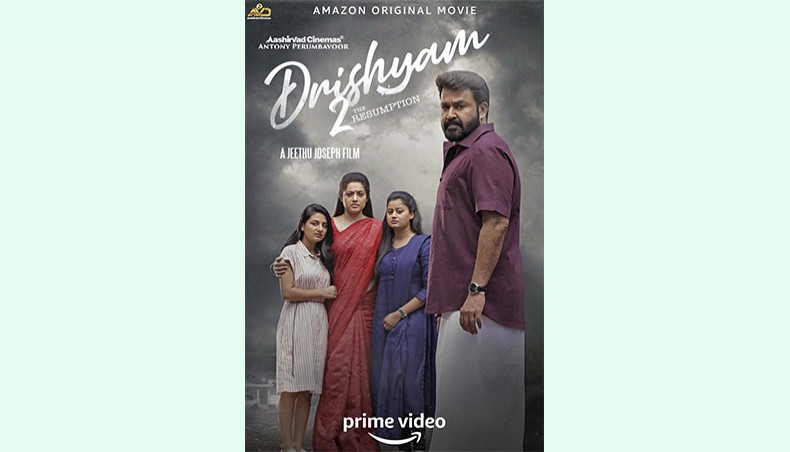 Drishyam 2 is the sequel of the 2013 Malayalam movie Drishyam. The movie was so successful that it was remade in four different Indian languages. Director Jeethu Joseph scripted another slow-paced thriller from the story of the first movie. Nahid Riyasad reviews the movie

The much-celebrated Malayalam drama-thriller Drishyam has a sequel now. Georgekutty, the protagonist of the film maintained the same aura to outsmart the entire police force — once again — to protect his family secret.

Every sequel of a successful movie has a two-edged sword at hand — it can be a burden or an inspiration. So, does Drishyam 2 manage to maintain its reputation and fulfil the expectation?

The original Drishyam was directed by Jeethu Joseph and released in 2013. The sequel is set six years after the original story but is completely dependent on the storyline of the first movie and makes constant references. However, the story looked done and dusted but Jeethu has done an excellent job in bringing out a sequel that just complements the original story.

Drishyam two starts with the same borderline-boring slow start filled with family conversations. It shows the elder daughter Anju is yet to recover from the traumatic events that happen with them six years ago and Any, the younger one, is a teenager now, who is not as touched by the past.

However, the girls and their mother, Rani, are living their daily lives with an eye behind their backs. On the other hand, Georgekutty displays confidence and looks like a man who has taken care of the upcoming incidents.

In the first instalment, Georgekutty outplayed the police investigation to protect his daughter Anju, who accidentally killed her classmate, while being sexually assaulted. The mother of the murdered boy happened to be the inspector general of police. The police deployed their might but Georgekutty scripted a perfect clean-up job after her daughter.

Six years later, Georgekutty, who used to own a cable company, now owns a theatre and wants to produce a film. His prosperity is a matter of jealousy among many of the locals and the support he got from the public before, is not anymore. Moreover, many locals believe that he did commit the murder.

The story of the movie is built around female characters, despite a male protagonist. The crime that is driving the story — a young girl killing her sexual assailant — and the vengeance or justice sought by the mother of the murdered, all done by women. It was on the female characters of Georgekutty’s family to keep the secret.

Director smartly put different dynamics of a relationship and the consequences in case of communication gap. Georgekutty’s not completely opening up to his wife is eventually hurting their relationship.

Despite having all the chances to portray Georgekutty’s actions as completely heroic, Jeethu shows the burden of guilt and the toll it took on the family.

Another aspect of the movie is parenthood and what can happen if a parent lacks attention to the upbringing of their children. The murdered boy Varun secretly videotaped Anju and tried to blackmail her with the clip. Despite knowing that their son is not properly behaving and violating basic decency, the police mother was not accepting of her son’s crime. However, the father was aware of his son’s downfall.

In contrast to that, Georgekutty pays attention to every detail of his family and the upbringing of his daughters. His patient behaviour with his daughters while they were going through, over and over again, every element to their cover-up story shows his genuine care for his family.

Mohanlal, one of the most versatile actors in India, played Georgekutty. Even though the first movie portrayed him as an unassuming village businessman, we saw his charisma. He started Drishyam 2 exactly from where he left and kept the audience engaged and guessing with his calculative and patient moves. It would not be unwise to say that Mohanlal’s magnetism as Georgekutty is the heart of the movie if the story is the brain of it.

Geetha Prabhakar, the former IG of police and now retired, played by Asha Sharath showed the right amount of aggression and determination who is on a mission to prove Georgekutty as the killer of her son.

Other characters also played their part as expected. Siddique, Meena, Ansiba, Anjali Nair and Saikumar did exactly what was expected from their characters to hold the viewers’ attention.

The movie also excels in the technical aspects. A crisp job was done by the editor VS Vinayak. The music composed by Anil Johnson complements the tempo of the movie. Cinematographer Satheesh Kurup’s visuals show how the movie adopted the current pandemic situation as people were seen wearing masks.

Kerala is considered as the god’s own country. The lust and intense green setting of the movie is a testament to that.

Drishyam 2 revived a murder that seemed to conclude well for the protagonist. It lived up to the expectations by exploiting loopholes of the first part and introduced new characters, twists and turns to entertain the audience with a robust thriller story.

In his official social media account, Jeethu Joseph announced that he has the climax for another sequel but the story is yet to be developed. Mohanlal loved the climax so much that he confirmed his presence in the next sequel also.

Till then, the Drishyam franchise lovers should wait and watch the first two parts over and over again.