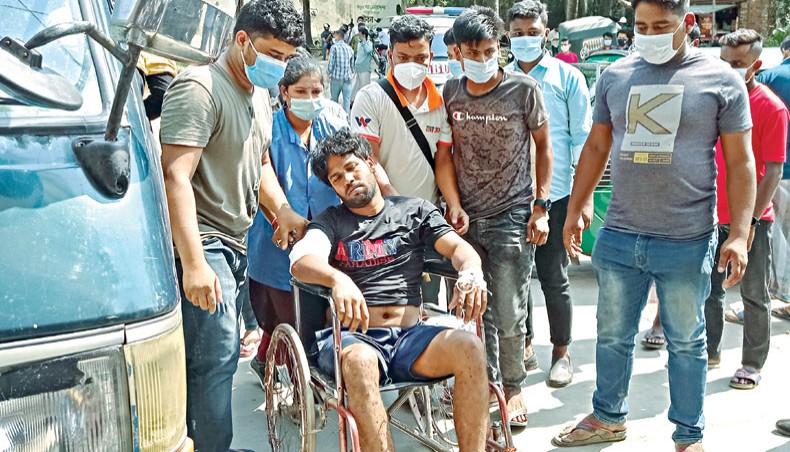 An injured man rests on a wheelchair after being treated at a hospital in Chittagong on Saturday following a protest by demonstrating workers at the construction site of a Chinese-financed power plant. — AFP photo

At least five demonstrating workers were killed and 11 others received bullet injuries during a clash between the police and workers at an under-construction coal-fired power plant of S Alam Group at Baraghona under Gandamara union of Banshkhali in Chattogram on Saturday.

The workers at the power plant called SS Power Plant were demonstrating at the plant from the morning over several demands, including reducing duty time by two hours during Ramadan and payment of dues, the police officer said.

Workers blamed police for opening fire on their peaceful protest for dues and reducing working hours during the month of fasting for the Muslims.

When the police tried to bring the situation under control, the workers attacked the police, Banshkhalipolice station inspector of the investigation wing MdAzizul Islam told New Age.

Three policemen — Yasir, 24, Abdul Kabir, 26, and Asaduzzaman, 23 — of Gandamara police outpost were also injured in the clash and admitted to CMCH at about 1:30pm, he added.

Several hundred workers of the coal-fired power plant of S Alam Group left the workstation with bags and baggage after the clash.

The local workers blamed the Chinese officials and workers for the incident.

Md Sazzad, a worker who also left the power plant after the clash, told New Age that Chinese officials insulted some of the Muslim workers on Friday evening as they demanded a break for iftar and maghrib prayers.

Later, the local workers staged a demonstration at the plant demanding that the authorities should reduce the working hours and give break for iftar and prayers.

The workers continued their demonstration on Saturday morning. Suddenly the police started charging batons on the workers, he said.

Agitated workers hurled stones and brickbats at the police and later, the police opened fire on the workers at about 10:00am, the witnesses claimed.

Another worker, Jahed Hossain, said that they managed to leave the power plant area after the police started opening fire on the workers, but many workers were still inside the factory.

Another worker seeking anonymity claimed that the Chinese workers and police set fire to vehicles at about 12:00pm, 2 hours after the clash.

The power plant authority and police, however, claimed that the agitated workers carried out an attack on Chinese workers and police and set fire to the vehicles.

Talking to New Age, Mostaim Billah Adil, head of state department of S Alam Group, claimed that the workers set fire to vehicles and piles of wastage in the morning but they burned till the afternoon.

A total of 3,500 local workers and 853 Chinese employees were working at the plant which is being constructed by Shandong Teijun Electric Power Engineering Co Ltd.

SM Rashidul Hoque, superintendent of Chattogram district police, claimed that police opened fire on the agitated workers when they attacked on the Chinese workers and the police.

After visiting the coal-fired power plant of S Alam Group at Baraghona of Gandamara union in Banshkhali at about 3.30pm, it was seen that seven mixer trucks, one minivan and two motorcycles were burnt and six other mixer trucks were vandalised.

They doused the fire after a two-hour attempt at 2:00pm, added Farid Ahmed.

Suddenly a fire broke out near gate No 4 of the plant at about 5:00pm. The officials and some Chinese workers were seen running with their belongings.

The fire broke out after the fire service had left the plant.

When contacted, Faruk Ahmed, chief coordination of the plant, declined to comment on the incident.

A meeting was held from 2:00pm to 5:00pm at the plant office over the incident.

Mohammad Mominur Rahman, deputy commissioner of Chattogram, told New Age that they formed a four-member committee, led by an additional district magistrate, to investigate the incident.

The plant authorities directed to fulfill the demands of the workers, he said.

A decision was taken in the meeting that the plant authority would give a compensation of Tk 3 lakh to each of the deceased family and Tk 50,000 to the injured workers for treatment, he said.

A total of 150 police members were deployed at the plant to avoid further incident, he said.

Earlier, four villagers were shot dead on April 4, 2016 during clashes with police when the villagers staged a demonstration against the move to construct a coal-fired power plant at Gandamara area in Banshkhali.

Police opened fire on the agitators, who attacked the police contingent defying the ban on holding rallies at the village.

The 1224-MW coal-fired power plant is under construction at $2510.2 million with 30 per cent investment from seven Chinese banks, according to information disseminated by Industrial and Commercial Bank of China.

The rest 70 per cent finance of the power plant comes from domestic sources, on which details have not been disclosed. State-owned Rupali Bank is one of the local investors.

The power plant has already missed its schedule to supply power to the national grid from November, 2019.