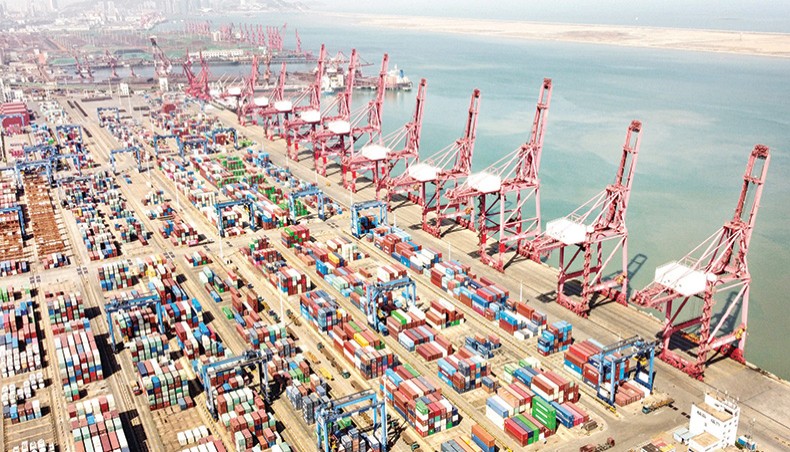 A file photo shows an aerial picture of cranes and containers at the Lianyungang port container terminal in Lianyungang, Jiangsu province. China’s economy grew at a record pace during the first quarter as it rebounded from a historic contraction caused by COVID-19, and boosted by exports and domestic demand. — AFP photo

China’s economy expanded at a record pace in the first quarter as the country continued its rapid recovery from 2020’s pandemic-fuelled slump, official data showed on Friday.

The 18.3 per cent explosion in gross domestic product growth was the fastest pace since quarterly records began three decades ago, but came off a historic contraction in 2020 during the depths of the pandemic.

It was also slightly short of forecasts in an AFP survey of economists.

While the coronavirus first emerged in central China in late 2019, the country was also the quickest to bounce back after authorities imposed strict control measures and consumers stayed home.

The sharp spike was partly due to ‘incomparable factors such as the low base figure of last year and increase of working days due to staff staying put during the Lunar New Year’ holiday, said Liu.

Migrant workers were urged to remain in the areas where they work during the break owing to fears that the annual massive migration might lead to local outbreaks.

On a quarterly basis, GDP rose 0.6 per cent from the last quarter of 2020, slowing slightly, a shift analysts attributed to a wave of local virus outbreaks which triggered travel restrictions and lockdowns.

In a sign that the country’s crucial consumer sector is getting back up to pace, the figures showed retail sales surged in March, bringing first-quarter growth to 33.9 per cent as life largely returned to normal.

Industrial output rose a less-than-estimated 24.5 per cent in the quarter.

The figures come days after officials announced that exports — and particularly imports — had rocketed in March.

While vaccines are being rolled out around the world, the distribution is uneven and a pick-up in infections is forcing governments to reimpose containment measures, holding back recovery.

The urban unemployment rate — a figure that analysts have been closely watching — ticked down slightly to 5.3 per cent.

But economists expect growth drivers could change in the months ahead and have warned of an ‘uneven’ recovery so far.

‘There is expectation that with retail sales’ outperformance and a recovering job market, that there is momentum picking up in private consumption,’ she told AFP, adding that this should take over the lead in growth later in the year.

Beijing has been working to reposition its economy from a coalpowered manufacturing base to one powered by high-tech green energy and domestic consumption.

But the country’s strong post-pandemic recovery has been powered by coal, with a raft of new plants approved, and environmentalists are concerned this could stem the shift towards greener policies.

A report from analysis company TransitionZero on Thursday said China needed to ‘cancel all new coal immediately and indefinitely’ and convert almost all of its coal fleet by 2040 in order to meet the zero-emissions target.

The economic data comes as US climate envoy John Kerry is in Shanghai for talks, and ahead of a Franco-German virtual climate summit on Friday in which president Xi Jinping is set to take part.