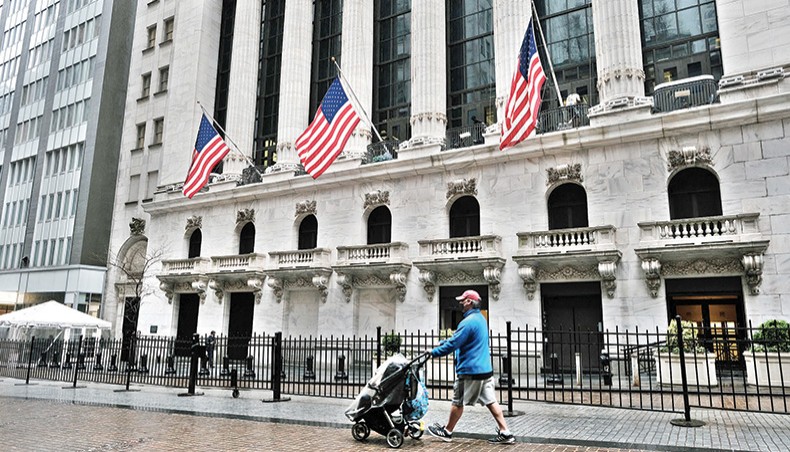 Global stock markets rose on Friday as strong economic data out of China fuelled optimism over the global economic recovery.

London’s benchmark FTSE 100 index climbed above 7,000 points for the first time since February 2020, or just before the coronavirus pandemic took hold worldwide.

‘This represents a massive milestone in recovering from the terrible pandemic and shows how investors’ confidence has completely changed since just over a year ago,’ noted Russ Mould, investment director at AJ Bell.

‘The market was understandably shocked as the coronavirus gripped the world but... it has quickly focused on the future and the ability for corporate earnings to recover.’

Shares in miners and oil producers were scooped up Friday on news that China’s economy — the world’s second biggest after the US — expanded at a record pace in the first quarter.

It followed figures on Thursday showing US jobless claims came in at their lowest level since the pandemic began, while retail sales soared in March.

Wall Street’s Dow index ended Thursday above 34,000 points for the first time and the S&P 500 clocked yet another record high.

China saw expansion of 18.3 per cent in the first quarter, boosted by a sharper-than-expected increase in retail sales.

The economic growth figure was the highest since records began three decades ago, enhanced by its chronically weak comparison figure from last year, though the reading was slightly below forecasts in an AFP survey.

Traders have been buoyed also by falling US Treasury bond yields which soothed worries that strong economic recovery could send inflation rocketing and force the Federal Reserve to raise its record-low borrowing costs.

Oanda analyst Edward Moya said the US economy would likely see more healthy readings over the coming months as Biden’s stimulus along with his planned $2.25-trillion infrastructure plan and pent-up consumer demand will send it into ‘overdrive’.